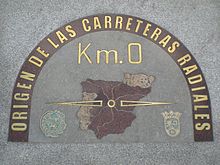 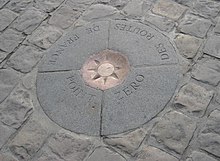 “Kilomètre zéro”, the fundamental point of France in front of the main entrance of the Notre-Dame de Paris cathedral

In classical geodesy, a fundamental point , also known as a central point , was the central measurement point of a country.

From its accurately determined astronomic coordinates ( astronomical latitude and longitude ) starting, by was triangulation (large-scale triangle measurement) a measurement power over the whole land spread .

In the last few decades the importance of fundamental points has decreased because the surveying systems of the states are being converted to intercontinental ellipsoids such as the WGS 84 .

The classic method of land surveying

The storage (fixing) of a reference ellipsoid relative to the earth's body takes place in that the geographical latitude and longitude of the fundamental point are determined astronomically and equated with its ellipsoidal latitude / longitude . Together with the exact direction to a distant triangulation point, this makes the axis of rotation of the ellipsoid parallel to the axis of rotation of the real earth .

However, the center of the ellipsoid does not coincide with the center of the earth , because the gravitational field of each region has certain irregularities (see geoid ). The center points can differ by a few 100 meters - depending on the location of the fundamental point in the region and its geological conditions.

This fact is both an advantage and a disadvantage:

Some fundamental points in Europe are:

The direction-giving side of the triangle usually has a length of around 30 km; the one for Austria-Hungary (Hermannskogel - Hundsheimer Berg ) was chosen to be unusually long at 60 km in order to increase the directional accuracy of the very extensive network. The long sight , the observation of which required particularly good weather conditions , runs across the plain of the Vienna Basin .

In the 1920s, Germany, Austria and other countries switched to the 3 ° stripe system of the Gauß-Krüger projection , but the earlier fundamental points play a role, e.g. B. in the analysis of surveying networks and the digitization of older data from the land registry . In the near future, the transition to an EU -uniform reference system with 6 ° wide meridian strips will take place.

With the emergence of satellite geodesy , it was possible for the first time to derive geocentric earth models whose characteristics are based on the different mass distributions of the earth's mass . Since the geodetic calculation surface in the form of the ellipsoid is now derived from a large number of measurements and no longer from a single point without reference to the geocenter , classical fundamental points have largely lost their meaning. Because of the manifold possibilities of determination, one no longer speaks of the geodetic datum, but of the system .

Internationally, the WGS 72 and above all WGS 84 systems have gained great importance with regard to GPS . Many states have converted their national surveys to these geocentric systems.