This article covers the astronomical azimuth. For other meanings, see azimuth (disambiguation) .

This article or section is not worded in a generally understandable manner. The shortcomings are described under Discussion: Azimuth . If you remove this module, please explain this on the article discussion page and add the automatically created project page section Wikipedia: Incomprehensible articles #Azimut um{{ Done | 1 = ~~~~}}.

The (also the) azimuth (from Arabic السموت, DMG as-sumūt  'the ways', plural ofالسمت / as-samt  / 'the way') in astronomy is a horizontal angle oriented towards one direction . The term is also used in other departments.

The azimuth in astronomy and geodesy

The definition of astronomy is as follows: The azimuth is the angle between the meridian plane and the vertical plane of a star .

In astronomy, the azimuth is either starting from the south on the west counted ( South azimuth ), so that a star in the south, an azimuth of 0 ° and a star in the West an azimuth of 90 °, has or north on the east ( north azimuth ). The former is the original astronomical method of counting, because when an equator point with right ascension a is on the meridian, it is a o'clock sidereal time (simple conversion of the horizon to the equatorial system ).

So it is generally counted, looking from the zenith to the nadir , counter to the earth's rotation in a mathematically negative sense ( clockwise ), i.e. in the direction of the apparent rotation of the celestial sphere around the observer as he actually sees it. Analogously, one measures in the southern hemisphere from south-eastward (second system in the above sense, respectively from north-westward in the first sense), which corresponds to the local - "mirror-inverted" - course of the sun and stars from east to north to west. However, there are also systems in use that are each indicated in the other direction of rotation. Therefore, when specifying azimuths, the exact definition of the underlying coordinate system must always be observed.

In addition to this astronomical azimuth, which can be precisely determined by measurements according to fundamental stars, geodesy also knows the ellipsoidal azimuth . This is the direction in a surveying network , based on a reference ellipsoid of the national survey or on a mean earth ellipsoid, which is calculated to an accuracy of 0.01 "( arcseconds ). Astronomical and ellipsoidal azimuths differ by the east-west component of the vertical deviation . In the Gauß-Krüger coordinate system , angles are specified that relate to the north of the grid (vertical or x-axis). The reason for the difference between the astronomical and terrestrial systems is the precise definition of the zenith using the local gravitational vector (perpendicular), or the surface normal (perpendicular) of the ellipsoid, and analogously to the exact north.

The methods for determining the azimuth are the subject of astrogeodesy ; the most important measurement methods for practical use are the polar azimuth (using the pole star) and the solar azimuth . Individual measurements with celestial bodies can be accurate to about 0.1 "(corresponds to 5 mm over 10 km), with longer series of measurements also more precise. Solar azimuths only reach 1–5 angular seconds, but are gained quickly and have the advantage of daytime observation .

Azimuths in navigation and technology 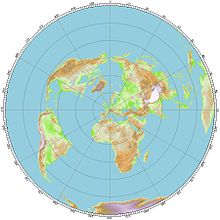 Azimuth map, as you can z. B. to align directional antennas for long-distance connections from a certain location (here: Switzerland)

In navigation ( seafaring , aviation ) the azimuth between the position and the target point is called the target course , in contrast to the course actually driven over the ground . In nautical terms, the azimuth is related to north (see also culmination ). For example, the azimuth for the southeast is exactly 135 degrees in the sense of a nautical course, and 225 degrees for the southwest .

In astronomical navigation , azimuth is the angle at the geissted location ( coupled location ) from north to east to the image point (base point) of a star.

In optics , the angle of inclination of a coordinate system defined by the beam path with the horizontal plane (laboratory coordinate system) is referred to as the azimuth (e.g. EN ISO 11145: 2001).

In cartography , azimuth is understood to be the clockwise measured angle between true north (north pole) and any direction (e.g. direction of march , magnetic compass bearing , etc.) on the earth's surface.

In artillery , the azimuth is the exact direction given in dashes (artillery promille) .

In antenna technology ( satellite radio ), the azimuth angle describes the horizontal alignment of an antenna, in contrast to elevation , which indicates the vertical angle between the horizon and the direction of the antenna.

In tape recorders , cassette recorders and optical sound devices on film projectors , the angle measured in the tape plane between the tape head gap and the orthogonal to the tape running direction is called the azimuth. This angle should ideally be zero, otherwise there is an azimuth error. The sound heads can be adjusted accordingly to produce the correct azimuth.

In solar technology (at least north of the equator) the deviation of the solar collector from the south is called the azimuth. −45 ° means south-east orientation, 0 ° south orientation and + 45 ° south-west orientation of the collector. Deviating from this, the north azimuth is also increasingly used in this area to avoid sign errors.

The spherical triangle used to calculate the azimuth

The illustrated spherical triangle is formed by the three sides and the three corner points location , north pole and destination . The triangle is described, among other things, with the spherical side cosine law:

Here are where and are the latitudes and and the longitudes of the two locations. The above formula becomes:

Distance is a segment of a great circle and is expressed in degrees of angle, with each minute of arc on the surface of the earth equal to a distance of one nautical mile .

With the calculated distance, the values ​​of all three sides are known and the azimuth can be calculated in the second step with a second spherical side cosine set:

Again you replace and and it follows:

The inverse function of the cosine function ( arccosine ) always leads to two angle values. In our case to and to .

If you move from the initial location on a large circle, i.e. along the side towards the target, the azimuth changes permanently. The azimuth as a function of the distance covered can be derived with the (first) spherical cotangent theorem. First you calculate the angle . The new azimuth is then .

Here is again . here is the azimuth at the start of the journey, which we write as and is the distance traveled (in angular degrees), which we write here as, so as not to be confused with the total distance . We also replace . The distance is converted into the angle . Each nautical mile (1,852 km) corresponds to one minute of arc and each degree has 60 minutes of arc.

For the azimuth that changes as a function of the distance covered, it follows:

You are in El Golea ( Algeria ) and want to march through the Sahara to Farafra ( Egypt ). The coordinates of El Golea and Farafra are:

Inserting these values ​​into the distance formula results in the distance from El Golea to Farafra , which corresponds to a distance of 1333 NM or 2470 km on the earth's surface  . If, in a second step, the calculated distance is used together with the latitudes of the two locations in the azimuth formula, an azimuth of is obtained .

The azimuth calculated here describes the direction you have to take in El Golea to get to Farafra by the shortest route. If you march on the given great circle, i.e. on the shortest connection, the azimuth changes constantly.