The TOPEX / Poseidon satellite, launched in 1992 for accurate altitude measurements

As navigation satellites are artificial earth satellites called that for positioning are used by land, sea and air vehicles.

For this purpose, the satellite - whose orbit is precisely measured - emits radio signals that are received and analyzed by measuring devices on earth. In the past, frequencies between 100 and 500 MHz ( meter and decimeter waves ) were used, today up to 20 GHz ( centimeter waves ).

The basis is the distance measurement between the receiver and the current satellite position. It can also be done by means of " pseudoranging " or the Doppler effect ( hyperbola navigation ). Solar cells are used for power supply, atomic clocks (formerly quartz oscillators) as time standards, and a network of observation stations with an associated data center to determine the orbit . 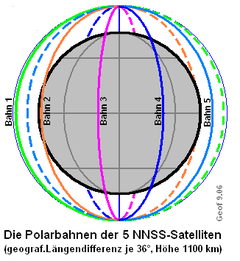 Orbits of the TRANSIT-NNSS satellites

Movement of the original 18 GPS satellites

In a system that moves relative to the observer, time runs more slowly (see time dilation and Hafele-Keating experiment ). The clocks on board a navigation satellite have to be readjusted again and again. Alternatively, the atomic clock can continue to run uncorrected, but instead a correction value is updated.

The choice of orbits essentially determines the performance of the system. Satellites in low orbits allow more accurate triangulation, but have a shorter lifespan and a shorter visibility time, so more satellites are required for full coverage. Accordingly, the heights and inclinations of navigation satellites - depending on the purpose - can be very different. The transit NNSS system, which was widely used in 1965–1990 , had 5–6 satellites in 1000–1100 km high polar orbits . They were so offset from one another (see picture on the right) that a satellite rose over the horizon about every hour. The earth rotates under these satellite orbits like in a cage.

Today's global positioning system uses 25–30 satellites at an altitude of 20,200 km and orbits with an inclination of 55 ° to the equator. GLONASS (with a slightly higher inclination to better cover higher latitudes) and the European Galileo system use a very similar configuration , whereas BeiDou distributes a similar number of satellites in geosynchronous and geostationary orbits 22,000 km high. In all cases the goal is to have a certain number of satellites (at least four, in practice at least six to eight) above the horizon at any point on earth at any point in time. The orbit height means more complex starts, but the satellites are visible for a long time over a location and their lifespan is long (10–15 years). The high-frequency technology is so advanced that the radiated with only about 50 watts signals are still easily measurable on Earth. Most satellites currently have masses of around 2000 kg and each have 2 atomic clocks based on cesium or rubidium . In addition, there are the ground stations that measure the satellite orbits with high precision and have to make this data accessible to the satellites. Knowledge of the paths is essential for an accurate position determination.

Doppler effect and its evaluation

The first satellite, Sputnik, launched in October 1957, continuously transmitted radio signals. Even then, scientists had studied the trajectory of Sputnik both with interferometers and with simple, unidirectional antennas. One quickly came to the conclusion that one could calculate one's own position with a sufficiently accurate clock, the orbital elements of Sputnik and the Doppler shift of the Sputnik signals. Ultimately, it was even possible to obtain enough data for a position determination from a single overflight of the satellite.

The first reliable and usable satellite navigation system was the US transit NNSS system in the 1960s . It used the Doppler effect resulting from the satellite movement , which was measured at coded time stamps in the radio signals of the transit satellites. The submarines of the Navy thus had the opportunity, regardless of their place (first LORAN had, at best, a few thousand miles a range) and the weather ( celestial navigation ) to determine the position and trajectory of the Polaris program -Atomraketen correctly.

The Doppler shift was recorded and integrated for 1 minute, which corresponds to the distance differences between the relevant satellite words and the receiver. The ship's position was obtained from these hyperbolic lines with an accuracy of about 50 m - but only 15-30 times a day.

Since every Doppler measurement has to do directly with speeds or their differences, the vehicle's own speed and the rotation of the earth could also be recorded. In addition, the NNSS system was used for national surveying : simultaneous measurements carried out with two or more receivers at distant survey points could precisely determine the distance between them. The evaluation with special differential methods (section of hyperboloids ) resulted in postprocessing positions that were accurate to about ± 50 cm.

Advanced navigation satellites of the 1970s (type NOVA ) had special accelerometers on board to eliminate the non-gravitational forces on the satellite orbits. This enabled navigation to be increased to an accuracy of 20 meters worldwide, and in longer national surveying campaigns even to ± 20 cm.

Doppler shifts are also measured by the Doppler Orbitography and Radiopositioning Integrated by Satellite (DORIS) satellite system developed by France . However, the measurements are not made on the ground, but in the space probes themselves, which reduces the effort. Today's focus of DORIS is not navigation, but the monitoring of the earth's rotation , the ionosphere and the geodetic reference system .

Even today, COSPAS-SARSAT , a satellite system for locating crashed ships and aircraft, uses the Doppler effect - but the emergency signals from the satellite are recorded and evaluated in a ground station.

Other systems (e.g. PRARE ) carry transponders to answer the radio signals arriving from a ground station (similar to secondary radar ). This two-way measurement allows - in contrast to GPS - a real time of flight measurement and a better recording of the atmospheric refraction .

All of today's global navigation satellite systems (GPS, GLONASS, Galileo or BeiDou) do not work - as is often claimed - with real time measurement of the coded signals (see trilateration ), but with pseudo-routes . They mean a distance measurement in which all measuring distances deviate from the true value by a constant amount, because the satellite and receiver clocks can only be approximately synchronized. The moment at which the signal arrives at the receiver is registered in its time system and the small time difference δt is determined as an unknown together with the location coordinates . Therefore, measuring the distance to three satellites (intersection of three spheres) is not sufficient , but a fourth is required. In fact, there are usually 6–10 satellites above the horizon anyway, so that the geometrically best constellation can be selected (see the accuracy parameters PDOP and GDOP ). Modern devices can receive the signals of several systems and evaluate them in parallel, so that accuracy and availability are increased.