The title of this article is ambiguous. Further meanings are listed under Polarstern (disambiguation) .
Database links to Polarstern / α Ursae Minoris

The Pole Star is the brightest star in the constellation Kleiner Bär (also popularly known in German as the Kleiner Wagen ). Since its apparent magnitude of 2 mag is relatively high and it is close to the north pole of the sky , it is a suitable means of determining true north .

A large number of names have been passed down for this star, which reflects its great importance in the most diverse cultures: Stella Polaris or just Polaris and North Star ; the ancient Greeks called it Phoenice ("the Phoenician"), other names are fishing star , Cynosaura , Cynosura (Greek Κυνόσουρα "tail of the dog"), Lodestar , Mismar , Navigatoria , Tramontana , Çulpan and Poljarnaja . Another name for the polar star is also the north polar star.

The IAU Working Group on Star Names (WGSN) defined the proper name Polaris as the standardized proper name for this star on June 30, 2016 .

Polaris is a visual double star . The companion with the apparent magnitude of 9 mag at a distance of 18.4 ″ was discovered in 1780 by Wilhelm Herschel . The main star itself is again double, which was only able to be resolved optically in 2006 with the help of the Hubble space telescope. The two components have an angular distance of 0.17 arc seconds.

For some time the main star was considered to be a pulsation-variable star of the Cepheid class with a brightness fluctuation between 1.92 mag to 2.07 mag and a period of 3.9 days. However, since around 1980 these fluctuations have slowly subsided and are now only around 0.01 to 0.02 mag. The North Star is moving away from the earth at a speed of 17 km / s. Until its variability was discovered , it also served as a reference star (zero point) for the scale of apparent brightness.

The components of close binary star are systematically as Polaris Aa and Polaris Ab denotes the companion as Polaris B . The main star of the system, Polaris Aa, is a supergiant and about 2000 times brighter than the sun. It is around 430 light years away from us. Polaris Ab is a dwarf star that orbits Polaris Aa in a retrograde orbit at a distance of about 20 AU (3 billion kilometers, about the distance of the planet Uranus from the Sun) within about 30 years . Two other potential companions 43 "(C) and 83" (D) apart are very likely not part of the star system. 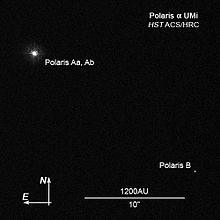 The components of Alpha Ursae Minoris

The North Star is currently only about 0.7 ° from the northern celestial pole and is therefore visible all year round in the northern hemisphere ( circumpolar ), but never in the southern hemisphere . Due to its proximity to the pole, it has long been used as a free-eyed orientation and navigation aid. With its help, you can roughly determine the direction to the geographic North Pole. For observers without a telescope it seems to be in the same place all year round; its height in the sky corresponds roughly to the (northern) degree of latitude on which the observer is located. As a star with an apparent brightness of the second magnitude, however, it does not immediately catch the eye and is by no means, as is often mistakenly assumed, the brightest star in the night sky visible from Earth . The nearest brighter stars are about 30 ° away in the constellations Cassiopeia and Great Bear ; the part of the Great Bear that makes up the Big Dipper is often used to help locate the North Star (see below).

In the southern starry sky there is no star of comparable brightness near the pole; Polaris Australis (σ  Octantis ), a much weaker star with an apparent magnitude of 5 mag, can be seen as the counterpart of the Pole Star.

Find in the sky 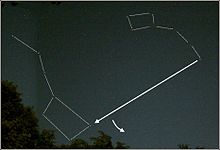 The constellation Great Bear or Big Dipper is very clear and can be seen in the sky all year round in northern latitudes. If you lengthen the imaginary connecting line between the two bright rear stars of the Big Dipper (over its "rear axle") by about five times, you get almost directly to the North Star, which is about 1.5 moon in diameter next to the imaginary line.

Another variant is to draw a line between the first and third drawbar star (depending on the season and observer position) of the Big Dipper and the center star of Cassiopeia . The North Star is roughly in the middle of this connecting line.

With both methods there is the possibility of mistakenly mistaking the Pole Star for one of the two “rear axle stars” of the Little Dipper. On the other hand, it is helpful that a comparably bright star can neither be seen below nor above the Pole Star.

The location of the Big Dipper and Cassiopeia (as well as that of all other constellations) depends, as mentioned, on the season, the time and the latitude of the observer (see also sidereal time ).

The coordinates of the North Star:

Polarstern in past and future 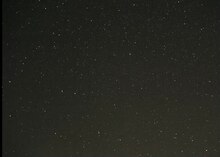 The earth's axis in space is not stable, but performs a slow circular motion . With a period of approx. 25,700 years, the Platonic year , it moves around the pole of the ecliptic , which lies in the constellation of the Dragon . This process is called precession ; it leads to a shift in the celestial poles. Arab astronomers therefore originally considered the star Kochab to be the polar star, and Turkish astronomers Yildun . Around 2800 BC Thuban served as a pole star.

The North Star is currently still moving slightly towards the celestial pole due to this shift in coordinates ; The closest distance to it will be in the year 2102 with 0 ° 28 '31 " 0.4753 °, after which it will slowly move away from it. In about 12,000 years, Vega , the main star in the constellation Lyra , will again become the Pole Star It was already in the Stone Age about 14,000 years ago.

Path of the celestial north pole (= north pole of the earth's axis of rotation) around the ecliptic pole. + 2000 = year 2000 of our calendar: The drawbar star of the Little Dipper fits this time as the Pole Star

A schematic representation of the position in the sky can also be found on the flag of Alaska .