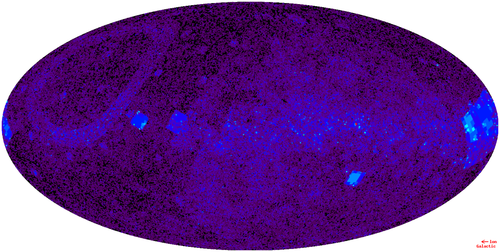 The area covered by the catalog compared to the entire firmament. For color legend see description page

The Henry Draper Catalog is an astronomical star catalog with position and spectral type data for 225,300 stars . Stars contained in it are referenced with the abbreviation HD , followed by the number of the star. The Polar Star , for example, HD 8890th

The catalog was first published in nine volumes between 1918 and 1924 by Anny Jump Cannon and her staff at Harvard College Observatory under the supervision of Edward Charles Pickering . It was named in honor of Henry Draper , whose widow provided the funding. In 1949 the catalog was expanded by another 133,783 stars to a total of 359,083 stars.

The stars listed in the catalog have a mean apparent magnitude down to 9 m , which is around 50 times weaker than the faintest stars that can still be seen with the naked eye. This makes them average objects for amateur telescopes , but bright stars for professional instruments. The catalog covers the entire sky and can also be seen as the first large-scale effort to catalog the spectral types of stars.

The HD catalog numbers are given today with stars that have neither a Bayer nor a Flamsteed designation . The stars with the numbers 1 to 225300 come from the original catalog and are included in the order of their right ascension for epoch 1900.0. Stars in the range 225301 to 359083 are from the expansion of the 1949 catalog. The abbreviation HDE ( HD extension ) is sometimes used for the latter, but mostly only HD because of the uniqueness of the numbering.