Variable stars , variable stars or shortly variables are stars that have seen from Earth relatively short-term brightness variations, the cause can not be explained by events in the solar system - such. B. the twinkling of the stars ( scintillation ), which is caused by the unrest in the earth's atmosphere.

The brightness of variable stars fluctuates with periods which are to be regarded as very short compared to the general stellar evolution. Changes in light can be observed within hours, days, even decades or centuries. There are two different types of variability:

In the past, variable stars were seen as something special. Nowadays it is assumed that all stars show temporary fluctuations in brightness in the course of their development, because in the last few decades the observation and development of measurement technology have expanded our knowledge of variable stars. As a result, the number of stars on which one can determine brightness variations has increased many times over. With the increase in measurement accuracy, it has become more complicated to find a general definition to differentiate variable stars from unchangeable stars:

The first descriptions of the changeable can be found in Chinese chronicles . The new stars were either novae or supernovae . However, it could also have been comets or planetary constellations. According to the Aristotelian view of the world , the sky was eternal and all changes were manifestations of the atmosphere. There are therefore no reports of variable stars from ancient times . It was not until the beginning of the Renaissance that the changeable stars were perceived.

The first variable observed was Mira ("the miraculous"), first described in 1596 by David Fabricius . The cycle-like light change of the Mira star, which is temporarily visible to the naked eye, with a period of 11 months and an amplitude of 8 mag was first described in 1639 by Johann Holwarda . This was the first known variable besides the guest stars (Novae or Supernovae). As early as 1572, Tycho Brahe had proven, based on the immeasurably small parallax of the supernova of the year, that the guest stars are not phenomena of the atmosphere. However, novae and supernovae were not counted among the changeable until the beginning of the 20th century.

Mira has long been regarded as one time - until the discovery of the variability of Algol by Geminiano Montanari in 1669. By 1844 only 21 variable stars were known, which had been found by chance either, or in the search for asteroids were discovered. In the same year Friedrich Wilhelm August Argelander published his "Request to the Friends of Astronomy", which can probably be seen as an impetus for the systematic discovery and observation of variable stars.

As a result of the Bonn survey , a star atlas for telescopic stars was available for the first time in the second half of the 19th century ; that is, stars that are invisible to the naked eye. By comparing the starry sky in the telescope with the Bonn survey, numerous variables of great amplitude have been discovered. The determination of brightness was achieved by estimating the variable against constant comparison stars. This method achieves an accuracy of at best 0.3 mag and is subject to subjective influences. Amateur astronomers continue to observe this method to this day and its combined long-term light curves over a range of more than 100 years are of great value in research.

When, after 1880, the sensitivity of photographic plates made it possible to record stars, this ushered in a new era in the study of variable stars. A photographic plate stores the brightness of thousands of stars for later investigation and facilitates discovery. Two plates of the same region of the sky are flashed : The images are arranged so that the stars overlap and one or the other plate is shown alternately with the help of a shutter. Variable stars show up by blinking. This is how most variables were found until around 1990. Variables with amplitudes of less than 0.3 mag can be discovered, which also corresponds to the accuracy of the brightness measurements. The period-luminosity relationship of the Cepheids , which is important for astronomical distance measurement , was first described by Henrietta Swan Leavitt in 1912 during an investigation of the variables in the magellanic clouds . However, it was not initially possible to calibrate this relationship.

New and improved observation techniques, together with the further development of theoretical physics, have made it possible to understand the causes of changes in brightness of variable stars in the context of astrophysics .

In this century, the trends that have already been indicated in the last decades of the last century have continued so far.

The naming of variable stars in the general galactic field is a combination of an identifier and the constellation . After the catalog of Johann Bayer letters have already been used to Q, the first variable was the identifier R. An example is the first variable in the constellation shield , which is named R Scuti. After arriving at Z, followed by RR, RS… RZ and SS, ST to SZ etc., to ZZ. When this namespace was exhausted, AA through AZ etc., up to QZ were used. (J was omitted to avoid confusion with I). Then the number V335 was started and counted for each constellation.

Variable stars of the Milky Way are listed in the General Catalog of Variable Stars and this is a little over 50,000 as of the end of 2016. In addition, the GCVS lists 10,000 variables in other galaxies, as well as over 10,000 "suspected" variables. These two attachments are no longer updated. It is unclear whether the naming will be continued. The artificial satellite Gaia is expected to discover approximately 18 million new variable stars in the Milky Way.

Variable stars are interesting for astrophysics in many ways:

There are several classifications of variable stars, many of which are based on the determination of the amplitude, periodicity, and shape of the light curve . Furthermore, spectral properties and, depending on the type, the behavior in the event of outbreaks are taken into account. The groupings from the General Catalog of Variable Stars (GCVS) are listed below. The AAVSO Variable Star Index (VSX) contains the same groupings, but divides some subgroups ("star classes") differently. 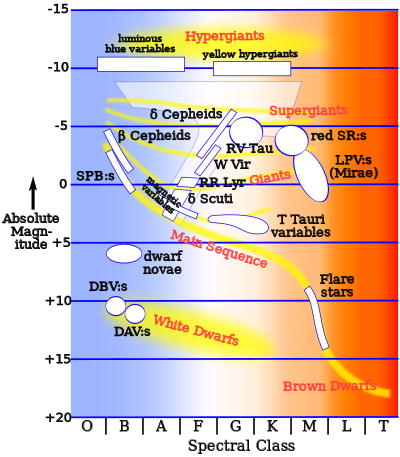 Position of some variable classes in the Hertzsprung-Russell diagram

With Gaia DR3 , a new catalog is expected in 2021 with a significantly higher number of variable stars.

Animation of an eclipsing double star with resulting light curve.

Eclipsing stars can be observed when the components of a binary star system run past one another from the point of view of the earth and thereby cover one another. When a star is covered, the brightness of both star disks is no longer visible from Earth and we observe a minimum. Eclipse-changing stars have probably been known as changeable since ancient times, at the latest since the 17th century. The best-known example is the star Algol - the subgroup of the Algol stars is named after it. Stars in which an exoplanet has been discovered using the transit method are also included in the eclipsing variables.

Rotationally variable stars are stars that change their brightness in the course of their rotation. This happens either because they are ellipsoidally deformed as components of close binary stars or because they show a non-uniform distribution of brightness on the star's surface. A non-uniform brightness distribution can be caused by sunspots or by thermal or chemical inhomogeneities caused by a magnetic field that does not coincide with the axis of rotation . Pulsars , among others, are counted among the variable rotation stars .

Pulsating variables show a periodic contraction or expansion of their surface. The radial or non-radial oscillation leads to a change in luminosity due to the change in the radius, the star shape and / or the surface temperature . There are a number of different types of pulsation variators. Some of them play an important role in the measurement of cosmic distances due to the period-luminosity relationship and their high absolute brightness . These include in particular the Cepheids and the RR Lyrae stars . Many pulsation-variable stars are giant stars and so the relatively common Mira stars also belong to this group. Many pulsation-variable stars are located in the Hertzsprung-Russel diagram near the instability strip .

Schematic representation of a cataclysmic system

The changes in brightness of the eruptive variables are based on flares, envelope eruptions or mass discharges in the form of stellar winds and / or interaction with the interstellar medium . The eruptive variable stars include the luminous blue variable (LBV) , the young T-Tauri stars and the flare stars . Many red dwarfs like Proxima Centauri are also flare stars.