Red dwarfs are the smallest stars in whose center hydrogen burning ( nuclear fusion of 1 H ) takes place. About three quarters of all stars belong to this star class . They shine so faintly that not a single one can be seen with the naked eye from Earth.

Red dwarfs are main sequence stars at the cool (i.e. lower end of the main sequence in the usual representation of the Hertzsprung-Russell diagram ). For historical reasons, they are sometimes referred to as late main sequence stars , because it was previously mistakenly assumed that stars would evolve into spectral classes of cooler surface temperatures in the course of their evolution.

The term red dwarf is not a precise scientific category, but is used colloquially. In contrast to the lower mass limit, which is given by the minimum requirement for the physical process of hydrogen burning in the core (and thus differentiates red dwarfs from brown dwarfs ), there is no definitional agreement on the exact demarcation from hotter stars. Certainly all main sequence stars of the spectral class  M belong to the red dwarfs, occasionally stars up to the middle K-type (K5) are also included. Other criteria used in the literature are an effective temperature of approx. 2500 to 4000 K, an absolute brightness of less than M V  = +7.5, or the appearance of molecular absorption bands in the spectrum. In any case, the class defined in this way contains the majority of all stars, varying somewhat depending on the precise definition. However, roughly one can say that about three quarters of all stars are red dwarfs.

Size and temperature comparison between the sun , Gliese 229 A + B , Teide 1 and Jupiter ( symbolic colors ) 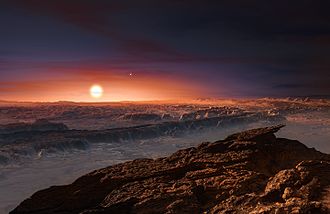 Artist's impression of a red dwarf's view from a fictional Earth-like planet . The star appears white, the sky blue is only weak in accordance with the small proportion of blue spectral color in the starlight.

Due to their low mass, the conversion of hydrogen into helium (nuclear fusion through the proton-proton reaction ) is much slower per unit of mass in red dwarfs than in heavier stars like the sun. Therefore, the luminosity of red dwarfs is only about 0.01 percent to 5 percent that of the sun . The energy radiation per surface unit is also below that of the sun, since the surface of a red dwarf is smaller than that of the sun, but the thermal energy generation decreases even more in comparison. According to Planck's law of radiation (which is approximately applicable to stars), a lower surface temperature is calculated and radiation is mainly emitted as long-wave light and infrared radiation.

In fact, the surface temperatures of red dwarfs are between 2200 and 3800  K (sun around 5800 K). In direct comparison to the sun they appear reddish (hence the name), but not really red, their light is similar to that of incandescent lamps (2300 to 2900 K) to the human eye and is even significantly whiter for the hotter red dwarfs.

Because of their low brightness, individual red dwarfs can hardly be observed over large interstellar distances.

Variable stars among the red dwarfs

Some red dwarfs show strong flares at irregular intervals , which can far exceed the brightness of the star itself. These are known as variable stars of the UV-Ceti class . If, on the other hand, only star spots can be detected on the surface of the red dwarf, then they belong to the BY-Draconis stars . Both are consequences of an active dynamo, which leads to a stellar activity due to a convective energy transport in combination with a differential rotation . This appears to be particularly pronounced in the red dwarfs, since the phenomena of stellar activity show strong relative changes in brightness due to their low absolute brightness.

Furthermore, cool sub-dwarfs with low metallicity have also been discovered in recent years , the exact nature of which is still being investigated.

The following important information is missing from this article or section:
brief reference to pre-main sequence evolution of low-mass stars, vertical Hayashi tracks
Help Wikipedia by researching and pasting it .

It is assumed that red dwarfs with a mass of less than 35 percent of the solar mass or with a later (numerically higher) spectral class than M3.5 are completely convective. This means that due to the opacity of the star's dense interior, the photons generated in the interior do not reach the surface, but the energy is transmitted from the core to the surface by convection . Thus, helium does not accumulate in the core, as is the case with heavier main sequence stars . Therefore, they can fuse a percentage more hydrogen before they leave the main sequence. This is a factor in the long lifespan of the red dwarfs. This ranges, depending on the mass (the smaller, the longer the duration of stay in the main sequence), from tens of billions to billions of years. Since the lower value is already greater than the age of the world (approx. 13.8 billion years), no red dwarf has left the main sequence while new ones are constantly being created. This explains the large proportion of the red dwarfs in the total number of stars.

When the hydrogen inside fuses to helium and is depleted, the star shrinks. The gravitational energy that is released is converted into heat and also conducted to the outside by convection. For some time the shell burning from hydrogen to helium still works . After that, the red dwarf reaches the stage of a special form of the white dwarf , which consists mainly of helium and hardly contains any heavier elements (namely the practically unchanged amount that was present during the star formation ). Since so far no red dwarf has been able to reach this stage in the normal way due to the insufficient age of the world, such special white dwarfs are not observed, but their properties are only described in theory. Red dwarfs do not become red giants because helium cannot be fused due to its low mass.

Currently, red dwarfs only play a minimal role in the energy balance of the universe, although red main sequence stars are probably the most common type of star. Since they are so common and so faint, they appear quite inconspicuous. It is assumed that, due to their very long lifespan and the increasing luminosity towards the end of hydrogen burning, they will play a major role in the long term. In the future there will be a general decline in the formation of new stars . The red dwarfs will still exist as self-luminous objects in the universe even at a point in time when the rest largely consists only of "dead matter" in the form of black holes , neutron stars and fading white dwarfs .

No dying red dwarf has yet been discovered because the universe is only 13.7 billion years old. One puzzle that has not yet been solved is the lack of red stars that do not contain metals ( elements other than hydrogen and helium ). According to the Big Bang theory, the first generation of stars would only consist of hydrogen, helium and traces of lithium . Red dwarfs emerged at this time and should still exist today. However, no red dwarf was found that only consists of the elements mentioned. The preferred explanation for this is that without heavy elements, only large and to this day unobserved stars of star population  III could arise, which quickly used up their energy reserves. In doing so, they left behind elements from which red dwarfs could form. Another possibility would be that red dwarfs are dark and rare without metals. Since this contradicts the evolutionary model of stars, this theory is considered unlikely.

The fact that red dwarfs and other dwarf stars linger on the main sequence for a long time while more massive stars have already left it allows the ages of star clusters to be estimated . The attempt is made to find the limit mass of the stars that are still on the main branch. This allows the lower value of the age of the stars to be determined. It can also determine the age of the formation of formations in the Milky Way , such as the galactic halo and the galactic disk .

Numerous planets orbiting red dwarfs have been discovered since 2005.

The habitability of planets of red dwarfs has been the subject of some debate. Although these stars are frequent and their state is stable for a long time, there are some factors that make life on planets of such stars difficult.

In order to be in the habitable zone , planets would have to be between 0.04 and 0.2 AU from the parent star. A planet would be in close contact with its parent star, so to speak, in order to receive enough light and warmth.

For planets of stars under half a solar mass, a bound rotation is to be expected as a result of this proximity due to tidal forces . This means that one side of the planet would always face the star and the other would be perpetual night. That could cause enormous temperature differences between the day and night side. Such conditions are considered difficult for life to arise. On the other hand, recent theories suggest that a dense atmosphere or large ocean spanning the planet could potentially carry the thermal energy received from the star around the planet. Such global oceans were considered possible in an analysis by Joshi from 2003. It can be assumed that high amounts of precipitation would occur on the bright side of such planets, but only comparatively low wind speeds of 10 to 20 m / s despite pronounced steady convection processes. In this scenario, the dark side would probably have very little rain except for the areas near the twilight zone (transition between the day and night sides of the planet). The range would depend on the strength and speed of the atmospheric currents. The amount of precipitation on the night side would decrease rapidly with increasing distance from the twilight zone. The temperature differences between the day and night side depend on the amount of water on the planet. The differences would be greater for a dry planet than for a planet with a lot of water.

Another potential problem is that red dwarfs emit most of their radiation in the infrared range. However, terrestrial plants mainly use energy from the visible range of the light spectrum, but there are types of purple bacteria that could theoretically get by with long-wave light for their photosynthesis . Another complication for potential aquatic plants is that water is highly absorbent for long-wave light. Even in shallow water there is complete darkness.

Perhaps the biggest problem would be the variability of the star. Red dwarfs are often covered by star spots (" sunspots "), which means that star radiation is reduced by up to 40 percent for months. Furthermore, some red dwarfs can emit huge flares that can multiply the brightness of the star within minutes. This variability could also create difficulties for living around a red dwarf. According to a publication from October 2018, such flares are said to occur regularly, especially in the first hundred million years after star formation, and thus permanently disrupt the development of an atmosphere around planets in the habitable zone.

More detailed investigations include the properties of the planets in the considerations. The infrared radiation in particular results in a habitable zone that is up to 30 percent larger for planets that are at least partly covered with water ice or snow. The reason for this is that water ice absorbs more radiation energy in the infrared spectrum than in the visible light range, which leads to greater heating of the planet.