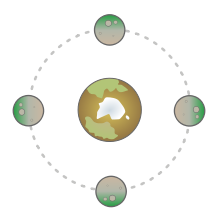 In the case of a bound rotation, one side of the satellite is constantly visible from the central body and the other side - shown here in green - can never be seen.

The back of the moon known only from satellite images

The bound rotation (rotation) is a term from astronomy and describes a phenomenon between two celestial bodies that are closely circling each other : The self-rotation of one celestial body (usually less massive) is not independent of the period around the other celestial body, but is coupled with it .

The bound rotation is often found between moons and their planets , between planets and their stars, and between the two stars of a close binary star system . The earth's moon is in a bound rotation to the earth , with it tidal friction was the cause for its synchronization. In some binary star systems, strong magnetic fields slow down the rotation, see AM Herculis star .

In most cases, the central body is significantly heavier than its companion. Then its high tidal accelerations have a dampening effect on a comparatively low mass moment of inertia. However, if the masses are not very different, it can take a very long time before the state of bound rotation is established. With similar masses, it is likely that the bound state will be established in both bodies in the long term, so that both bodies always face the same side. Here you have a double-bound rotation. The so far best known case of a double-bound rotation due to tidal friction is the very narrow Pluto - Charon system , both of which show the same side. In this case, the eccentricity of the tracks is also small. Pluto and Charon were the first and the only known body in the solar system with a double-bonded rotation until in a long time Kuiper Belt and in the asteroid belt similar types of systems have been found, such as (90) Antiope with their companions Antiope B .

If the orbit is more clearly eccentric , a fractional-integer spin-orbit resonance can also be stable, i.e. no further deceleration of the rotation can occur. The ratio of the period of revolution to the period of rotation can then be expressed by two small natural numbers . An example of this is Mercury's 3: 2 resonance :

This means that Mercury performs three half revolutions per revolution (in 88 earthly days). Mercury is somewhat elongated and its long axis is aligned radially in the perihelion . He maintains this energetically favorable orientation (see stabilization ) in a certain area around the perihelion, since there the angular velocity of the orbital movement is even somewhat greater than that of the rotation. The stability of the resonance is helped by the fact that the tidal acceleration (reciprocally proportional to the third power of the solar distance) is about five times as great in perihelion as in aphelion.

So far it was assumed that stars that are smaller than the sun , planets at a potentially life-friendly distance show a rotation bound to the star. Since the water on the side facing away from the central star and possibly the entire atmosphere would freeze out, the probability of a life-friendly environment decreases. However, this can be counteracted by the effect of thermal tides , in which a lagging, thermal tide mountain of the atmosphere forms due to the inertia during heating. This is not in a direct line to the central star. As a result, the atmospheric mass moving behind acts as a pulse generator through the gravitational force of the star. In the case of Venus , this effect prevents the bound rotation to the sun. Recent assumptions suggest that even thin, Earth-like atmospheres can prevent bound rotation, which would increase the likelihood of extraterrestrial life.

Bond with the earth