Deimos (from ancient Greek Δείμος "horror", spoken [ ˈdɛ.ɪmɔs ], also Germanized [ ˈdaɪmɔs ]) is next to Phobos one of the two natural satellites of the planet Mars .

It was named after Deimos , the son and companion of the Greek god of war Ares (Latin Mars ). Unlike the Earth's moon, Deimos, like all satellites in the solar system, has no official astronomical symbol or one that is widely used. Deimos symbols circulating on the Internet (e.g.

) are drafts by private individuals. An official recognition or use is not foreseeable, since astronomical symbols only play a subordinate role in modern astronomy. 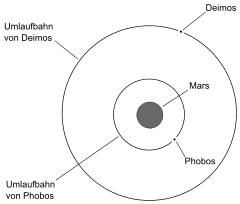 The orbits of Phobos and Deimos

Deimos is the more distant of the two Martian moons, it runs on an almost exact circular orbit of 23,459 km radius (corresponding to 20,063 km above the Martian equator) and needs 1 day, 6 hours and 18 minutes for a Mars orbit. The orbital period is 3.958 times that of Phobos and is therefore close to a 1: 4 orbital resonance . Like the Earth's moon , Deimos has a bound rotation , that is, it always turns the same side to Mars. Its orbit is slightly inclined at 1.79 ° to the equatorial plane of Mars.

From the surface of Mars, Deimos appears with an apparent diameter twice the size that Venus can be seen from Earth at its closest approach. Nevertheless, it can only be recognized as a faded dot on the Martian firmament, as it is also one of the darkest celestial bodies in the solar system. During a Deimos passage from Mars , it stands out in front of the solar disk. 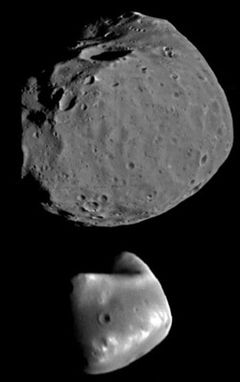 Phobos (above) and Deimos (below) in the correct proportions

The surface of this satellite, like that of Phobos, is covered with a layer of dust, the so-called regolith . This substance is known from the earth's moon. The regolith layer on Deimos is thicker than on Phobos, which means that the surface features are less pronounced on it. Deimos also has a very low albedo of just 7 percent. Two formations on Deimos were named in 1973: Voltaire crater 1.9 km in diameter and Swift crater 1 km in diameter .

Deimos was discovered by the American astronomer Asaph Hall at the US Naval Observatory in Washington, DC on August 11, 1877 - six days before his discovery of the larger, but closer to Mars, Phobos. Due to its close proximity to Mars, Deimos is difficult to see in the telescope as it is heavily outshone by Mars. During an average opposition of Mars, its angular distance is only a maximum of 53  arc seconds from the planet's surface, but the planet is over 14 size classes or more than 400,000 times brighter than this moon.

The early assumption that Mars has two moons goes back to Johannes Kepler , who postulated it in 1610 after the discovery of the four Galilean moons because he was convinced of harmonious relationships in the solar system .

The existence of two small moons so close to Mars was fictitiously anticipated by Jonathan Swift in 1727 , in the third part of Gulliver's Travels  - Lemuel Gulliver  - long before their discovery by Asaph Hall. He also goes into Kepler's third law , which shows the relationship between orbit sizes and cycle times. The book tells that Laputian astronomers “know of two smaller stars or satellites orbiting Mars; of which the innermost is exactly three and the outermost five of its diameters from the center of the planet; the former completes its cycle in ten, the latter in twenty-one and a half hours ”. This story was incorporated into Voltaire's novel Micromégas in 1750 , in which a giant from Sirius visits the solar system. Two of the craters on Deimos were named in honor of these writers.

This anticipation is remarkable not only because of the similarity in terms of orbital sizes and orbital times, but also because almost all of the moons known at the time  - the Earth's moon , the four Galilean moons of Jupiter and the five largest moons of Saturn  - have significantly longer orbital times and are therefore difficult to use as a template come into question. The Martian moons sought had to be much smaller and orbit their planets much closer.

The American electronic musician Larry Fast dedicated the composition Phobos And Deimos Go To Mars , which appeared on his 1978 album Cords , to the two Martian moons Phobos and Deimos .