The title of this article is ambiguous. Further meanings are listed under Albedo (disambiguation) . 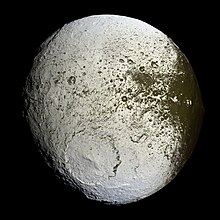 With a visible geometric albedo of 0.05 to 0.5, the Saturn moon Iapetus has the greatest brightness contrast of all known celestial bodies in the solar system.

The albedo ( Latin albedo 'white' ; from Latin albus 'white' ) is a measure of the reflectivity ( reflection radiation ) of diffusely reflective , i.e. non-luminous surfaces. It is given as a dimensionless number and corresponds to the ratio of reflected to incident light (an albedo of 0.9 corresponds to 90% reflection). For a given surface, the albedo depends on the wavelength of the incident light and can be used for wavelength ranges - e.g. B. the solar spectrum or visible light - can be specified. It is particularly important in meteorology , as it enables statements to be made about how much a surface heats up - and thus also the air in contact with the surface.

In climatology , the so-called ice-albedo feedback is an essential factor influencing radiative forcing and thus the earth's radiation balance , which is relevant for maintaining the global climate.

Different surfaces have different reflections: selected albedo values ​​are listed based on the landscape.

The albedo is also used in 3D computer graphics ; there it serves as a measure of the diffuse scattering power of various materials for simulations of volume scattering .

In astronomy , the albedo plays an important role as they (z. B. diameter, apparent / absolute magnitude) with basic parameters of celestial bodies related.

There are different types of albedo:

The relationship between spherical albedo and geometric albedo is the so-called phase integral (see phase ), which takes into account the angle-dependent reflectivity of each surface element.

The albedo is measured using an albedometer and is given in percent. In astronomy, albedometers cannot be used because of the great distances. The geometric albedo can be calculated from the apparent brightness and the radius of the celestial body and the distances between earth, object and sun. In order to determine the spherical albedo, the phase integral (and thus the phase function) must also be known. However, this is only fully known for those celestial bodies that move within the earth's orbit ( Mercury , Venus ). The phase function can only be partially determined for the upper planets , which means that the values ​​for their spherical albedo are not exactly known.

NASA satellites have been measuring the albedo of the earth since around 2004. Overall, apart from short-term fluctuations, this has remained constant over the past two decades; regionally, on the other hand, there were changes of more than 8%. In the Arctic z. B. the reflection is lower, in Australia higher.

The Deep Space Climate Observatory has been measuring the Earth's albedo at a distance of 1.5 million kilometers from the Lagrange point L1 since 2015 . At this point the probe has a permanent view of the sunlit side of the earth. 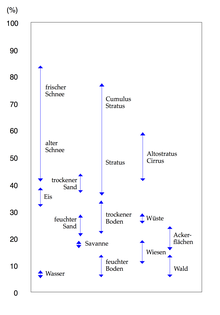 The surface quality of a celestial body determines its albedo. The comparison with the albedo values ​​of earthly substances makes it possible to draw conclusions about the nature of other planetary surfaces. According to the definition of the spherical albedo, the prerequisite for parallel incident light is very well given because of the great distances of the reflecting celestial bodies from the sun as a light source. The always closed cloud cover of Venus reflects back much more light than the basalt-like surface parts of the moon . Venus therefore has a very high reflectivity with a mean spherical albedo of 0.76, and the Moon has a very low reflectance with an average of 0.12. The earth has a mean spherical albedo of 0.3. Due to global warming, the regional albedo values ​​are shifting on earth. By shifting the cloud bands, the albedo sank z. B. in the northern temperate zone , but rose further north. The highest values ​​measured so far fall on the Saturn moons Telesto (0.994) and Enceladus (0.99). The lowest mean value was found at comet Borrelly with only 0.03 .

Smooth surfaces such as water, sand or snow have a relatively high proportion of specular reflection , so their albedo is strongly dependent on the angle of incidence of the solar radiation (see table).

The albedo also depends on the wavelength of the light that is being examined, which is why the corresponding wavelength range should always be specified when specifying the albedo values.