The sun and the planets of the solar system. (The proportions are correct in this graphic, but the distances are greatly reduced.)

The lower planets are:

The upper planets are: 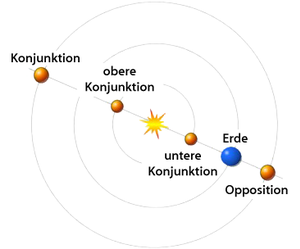 All lower planets come into lower or upper conjunction at the distance of their synodic period : From the earth's point of view, they are in a sense “in front of” or “behind” the sun in the daytime sky. In the months before and after, they describe loops around the sun in the starry sky . You can never reach an angular distance from the sun greater than 20 ° (Mercury) or 45 ° (Venus).

For the upper planets, however, there is only one type of conjunction ("behind" the sun), equal to an upper one. Instead of a lower conjunction, they come into opposition : They then stand in the midnight sky, opposite the sun. In the months before and after, they describe a long loop in the starry sky as seen from the earth , because the earth “overtakes” them on the inner path, as it were.

In contrast, the planetological subdivision into inner and outer planets relates to their position inside or outside the asteroid belt , according to which they clearly differ in their chemical structure.