Io , after the goddess of the same name , (also Jupiter I ) is the innermost of the four large moons of the planet Jupiter . With a diameter of 3,643 km, it is the third largest moon in Jupiter and the fourth largest moon in the solar system .

This moon became known through the first measurement of the speed of light by Ole Rømer in 1676 on the basis of observed eclipsing times of Io depending on the position of Jupiter to earth .

Ios specialty is a pronounced volcanism , in which it surpasses all other bodies of the solar system.

Io's discovery is attributed to the Italian scholar Galileo Galilei , who pointed his simple telescope at Jupiter in 1610 . The four large moons Io, Europa , Ganymede and Callisto are therefore also known as the Galilean moons .

The moon was named after Io , a mistress of Zeus in Greek mythology (Zeus corresponds to the Roman Jupiter ). Although the name Io was suggested by Simon Marius shortly after its discovery , it did not catch on for a long time. It was not used again until the middle of the 20th century. Previously, the Galilean moons were commonly referred to with Roman numerals and Io was Jupiter's moon I.

Like all satellites in the solar system, with the exception of the Earth's moon, Io does not have an official astronomical symbol or one that is commonly used.

The Galilean moons are so bright that you can see them with binoculars .

Io orbits Jupiter at an average distance of 421,600 kilometers in 1 day 18 hours and 27.6 minutes. The orbit has a numerical eccentricity of 0.004 and is inclined 0.04 degrees from the equatorial plane of Jupiter.

Io rotates around its own axis for 18 hours and 27.6 minutes in 1 day and thus shows a bound rotation like the Earth's moon and the other Galilean moons of Jupiter .

Io has a mean diameter of 3,643.2 kilometers and a relatively high density of 3.56 g / cm 3 . It has a slightly higher density and a slightly larger diameter than the Earth's moon .

In contrast to the other Galilean moons, there is almost no water on Io . This could be due to the fact that Jupiter had high temperatures in the early stages of its formation, which allowed water and other volatile substances on the innermost moon to escape.

Ios albedo is 0.61, which means 61% of the incident sunlight is reflected from the surface. The surface temperature averages –143 ° C.

Prior to the missions of the unmanned spacecraft, science was convinced that the Galilean moons were crater-strewn bodies similar to the Earth's moon. Based on the number and distribution of the craters, conclusions should be drawn about the age of the moons. When the Voyager 1 and Voyager 2 probes first sent detailed images to Earth, it was a surprise that the moons showed a completely different appearance. The reason for this is the previously unknown volcanism at Io.

Ios surface is only a few million years old and is subject to permanent change. It is essentially very flat, with a height difference of less than a kilometer, but there are also mountains of up to nine kilometers that are not of volcanic origin and are presumably formed by tectonic processes. Comparisons of the images from the Voyager probes and the 20 years younger images from the Galileo probe also indicate rapid processes of decay, which are already visible in this short period of time.

The most striking structures on the surface, however, are hundreds of volcanic calderas , which are up to 400 kilometers in diameter and sometimes several kilometers deep. There are also numerous lakes of molten sulfur . The deposits of sulfur and its compounds have a wide range of hues that give the moon an unusually colorful appearance.

Furthermore, lava flows of a low- viscosity liquid extend over several hundred kilometers. Evaluations of the Voyager data suggested that the lava flows are mainly composed of sulfur and sulfur compounds. In contrast, ground based infrared studies so-called hot spots with temperatures up to 2000  K . This is far too hot for molten sulfur. Possibly the lava flows consist of molten silicates . Recent observations from the Hubble Space Telescope indicate that the material is rich in sodium . 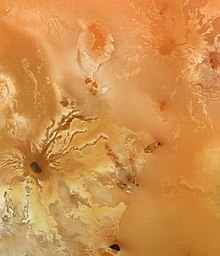 Two large volcanic eruptions: the one visible on the horizon on the left has a height of 140 km, the one on the lower right enlarged one of 75 km (Galileo, 1997)

Ios surface shows almost no impact craters , rather it is characterized by active volcanism and subject to constant changes. Io is by far the most volcanically active body in the entire solar system .

During eruptions , liquid sulfur and sulfur dioxide are emitted at speeds of up to 1 km / s and temperatures of 1000 to 1300 ° C, which can reach heights of up to 300 kilometers due to the low force of gravity . The materials fall back to the surface and form thick deposits.

Volcanism was first detected in 1979 on photographs taken by the Voyager 1 space probe, which caused a sensation at the time, as this was the first discovery of active volcanism on a heavenly body other than Earth . The eruptions vary greatly. Over a period of just four months between the arrival of Voyager 1 and Voyager 2, it could be determined that eruptions had stopped in certain areas while new ones had started in other places. The deposits around the volcanic craters had also changed significantly.

A comparison with the images taken by the Galileo probe 20 years later reveals that the permanent volcanic eruptions are constantly changing the surface of Io due to deposits of ejected material. Io has the planetologically youngest surface in the solar system. Their age is estimated to be around 10 million years. Therefore, impact craters are hardly recognizable, as these are leveled by the planetological processes.

The volcanic activity is caused by tidal forces that literally knead the moon and heat it up. The tidal forces of Jupiter on Io alone are more than 6000 times stronger than those of the Earth's moon on Earth. The additional tidal forces from Europe and Ganymede are still in the order of magnitude of the moon on Earth. Due to the bound rotation of Io, however, it is not the absolute strength of the tidal forces of Jupiter that is decisive, only their change. Io is forced onto a slightly elliptical orbit around Jupiter by a resonance effect with the moons Europa and Ganymede, whose orbital times are in a ratio of 1: 2: 4 to each other , so that the variation of the tidal forces of Jupiter by the variation of the distance alone is 1000 times more is as great as the influence of the tidal action of the moon on the earth. Due to the elliptical orbit, Jupiter also sways slightly back and forth from the perspective of an observer on Io during an orbit in the sky. Due to the short distance to Jupiter, this libration leads to periodically moving tidal mountains of up to 300 meters in the length of the satellite. The corresponding deformations of the earth's crust are only 20 to 30 centimeters. If Io's orbit were circular, then its tidal mountains would be motionless and there would be no volcanism on it.

Important volcanic mountains are the Culann Patera , the Tupan Patera , the Ra Patera and the Loki Patera . Other named eruptive formations are Marduk , Pele or Prometheus .

Internal structure: metallic core made of iron or nickel ; the mantle of rock or a layer of silicate extends to the surface (magma layer not shown).

In contrast to the icy moons of the outer solar system , Io seems to be composed mainly of silicate rock like the terrestrial (earth-like) planets . Data from the Galileo space probe suggest that Io has a core of iron , possibly with iron sulfides , at least 900 kilometers in diameter. When re-evaluating data from the Galileo spacecraft , researchers discovered that under the entire surface Io has magma, which is 20% melted, in a 50 km thick layer.

Io has an extremely weak atmosphere , made up of sulfur dioxide and possibly traces of other gases, and extends 120 km in altitude. The pressure on the surface is less than a billionth of a bar. During the two hours in the shadow of Jupiter, during which Io receives no sunlight on its orbit, the atmosphere solidifies to a layer of frozen sulfur dioxide less than 1 millimeter thick until the onset of heat the sun evaporates it again.

The 700 km high ionosphere consists of sulfur , oxygen and sodium ions . It is constantly renewed by volcanic activity, so that the loss of particles caused by the interaction with the magnetosphere of Jupiter is compensated for.

Io moves on its orbit through Jupiter's strong magnetic field , which induces electrical currents . Under these conditions, mainly sulfur and oxygen atoms in the upper atmosphere are ionized and thrown into space. Io suffers a mass loss of several tons per second due to this particle flow.

The ions form a torus around Jupiter along Ios orbit , which glows intensely in the infrared light. Particles that are swept away from the torus by the solar wind could be partly responsible for Jupiter's unusually extensive magnetosphere .

The ions are accelerated in the Jupiter magnetosphere so strongly that the resulting radiation would paralyze the currently (2011) radiation-safe electronics of a space probe. The radiation output of the polar lights induced in this way is around 100 terawatts .

In addition, a luminous phenomenon forms below Io in Jupiter's atmosphere, following the same mechanism that also creates the aurora borealis, which creates a trail of light. It has not yet been physically explained why further, weaker luminous dots precede the luminous point.

The position of Io has a very strong influence on the transmission of the radio waves emitted by the Jupiter system ( Jupiter bursts ). When Io is visible from Earth, the intensity of the radio emissions increases significantly. Speculations about Io's own dipole field , as possessed by Jupiter's moon Ganymede , were refuted by the Galileo space probe.

Spacecraft exploration of Io began in 1973 and 1974 with the Jupiter flybys of Pioneer 10 and Pioneer 11 . In 1979, Voyager 1 and Voyager 2 were able to make more accurate observations of the moon for the first time. Most of our knowledge of Io, however, comes from the Galileo orbiter, which reached the Jupiter system in 1995 and made several close flybys over Jupiter's moon over the next eight years. On February 28, 2007, the New Horizons space probe flew past Jupiter and its four large moons on its way to the dwarf planet Pluto . Among other things, Io was also observed, where a volcanic eruption could be documented by means of a photo series.

On August 5, 2011, NASA's Juno spacecraft was launched to explore Jupiter and its magnetosphere from a polar orbit. It entered orbit around the planet on July 5, 2016. It is also suitable for photographing Io, albeit with a poorer resolution, since Io is not actually a mission goal.

For 2020, NASA and ESA had proposed the joint Europa Jupiter System Mission / Laplace, which provided for at least two orbiters, each of which should enter an orbit around Europe and Ganymede and explore the entire Jupiter system, including Io, with a revolutionary depth should.

However, NASA canceled its stake in the project. ESA will also fly past Europe with its orbiter, now called JUICE , to explore Ganymede and Callisto . JUICE does not plan to fly past Io.

There is also a study for a probe called the Io Observer , which could explore Io in several close fly-bys. However, it is not clear whether it will be realized.