This article describes the astronomer. For asteroid see (2897) Ole Römer .

His parents were Christen Olesen Rømer, a wealthy businessman with a mathematics library, and his wife Anne Marie Storm.

From 1662 Rømer studied astronomy with Erasmus Bartholin in Copenhagen and worked with him until 1671, including on the publication of the writings of Tycho Brahe . In 1671 the astronomer Jean Picard came to Copenhagen on behalf of the Paris Académie des Sciences to determine the geographical longitude of the old Tycho Brahe observatory on the Øresund island of Hven . With the determination of the difference in length between Hven and Paris ( length problem ), the exact tables of Tycho Brahe could also be used in Paris. To do this, the orbit of Jupiter's moons had to be observed. The assistant Ole Rømer helped so skillfully with this work that he was invited to come to Paris with Picard at the end of the series of measurements in April 1672. Rømer agreed and worked as a member of the academy with Giovanni Domenico Cassini at the Paris observatory . There he developed a micrometer for telescopes in 1672 and built mechanical models for planetary revolutions ( Jovilabium (1677), Saturnarium (1678), Lunarium (1680)). To do this, he developed a new type of epicyclic gear . These planetariums were supposed to facilitate lengthy astronomical observations.

In 1676 Rømer was appointed royal Danish astronomer and only moved from Paris to the University of Copenhagen in 1681 . There he became a professor of mathematics. In 1681 he married Bartholin's daughter, who died in 1694 (in 1698 he married her sister). In 1683 he introduced a nationwide uniform system of length measures and weights in the Kingdom of Denmark. Around 1700 he developed an accurate measuring instrument for star positions , the meridian circle . With him he wanted to provide conclusive evidence for the model of the solar system by Nicolaus Copernicus by measuring the star parallaxes of Sirius . The proof was only achieved in 1838 by Friedrich Wilhelm Bessel . On March 1, 1700, Denmark introduced the Gregorian calendar at Rømer's suggestion . In 1702 he built the first thermometer with two fixed points ( Rømer scale ), which Fahrenheit further developed after a visit to him (1708). Rømer derived a measurement error formula for his meridian instrument in his Adversaria around 1705 . Today, this measurement error formula is ascribed to Tobias Mayer , who only found it 51 years later, in 1756, without knowing Rømer's derivation. Through his close observation, Rømer was able to prove that the star Castor in the constellation Gemini is a binary star system . Finally he took part in the observation of the transit of Mercury in front of the sun on May 5, 1707 and evaluated it.

After Rømer had already held various political offices from 1688, he became mayor of Copenhagen, head of the police and senator in 1705. In these functions he introduced far-reaching improvements, including the first street lighting (using oil lamps), and the renovation of the water supply and sewerage system. He held these offices until his death. He was buried in Copenhagen Cathedral .

Most of his devices and records were destroyed in the great fire in the city of Copenhagen on October 20, 1728, some pieces are still in the Kroppedal Museum . After his death, his ideas were partly disseminated through books by his student Peder Horrebow .

In 1699 he became a member of the Académie des Sciences. In December 1701 he was accepted as a foreign member of the Royal Prussian Society of Sciences .

The lunar crater Römer and the asteroid (2897) Ole Rømer are named after him. 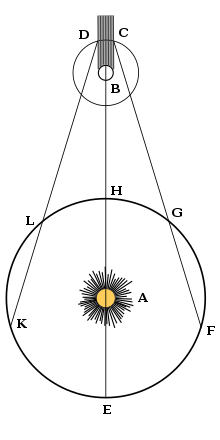 Eclipse during the orbit of
the moon Io

The question of whether the speed of propagation of light is finite or infinite had been discussed controversially for centuries. Followers of Aristotle , including René Descartes , pleaded for the infinite speed of light. In 1668 Cassini published his first tables in Bologna , which gave a timetable for the eclipses of the four moons of Jupiter. The times given there helped with the longitude problem . As early as 1668 he had noticed deviations between the timetable and observation. From 1672 on, Rømer continued his observations in Paris. This not only confirmed systematic deviations, but also confirmed the assumption that the eclipses - compared to the prediction - occurred earlier when the earth on its annual orbit around the sun (A) Jupiter (B) on the arc of E via F and G as far as the opposition position H approaches (see drawing by Rømer on the right), and later than predicted by the timetable when the earth moves away from Jupiter from H via L and K to the conjuncture position E. The reason for this is that the distance between Jupiter and Earth changes, and with it - if the speed of light is a finite quantity - also the time of flight . On August 23, 1676, Rømer dared to predict that the eclipse of the moon Io (DC) would be visible on November 9, 1676 by ten minutes "too late". When this delay actually occurred, he presented his declaration to the Royal Academy of Sciences (Academie des sciences) in Paris on November 21, 1676 and published it on December 7, 1676 in the Journal des sçavans under the title Démonstration touchant le mouvement de la lumière trouvé par M. Roemer de l'Académie des sciences .

In this article, however, the speed of light is not given, only the time it takes for the light to cross the earth's orbit. According to Rømer's calculation, the value was about 22 minutes; the correct value is just under 17 minutes. It was particularly important for Rømer to show that light does not spread instantly, but at a finite speed. Rømer only gave an upper estimate for the speed of light: for the diameter of the earth the light takes less than a second, according to today's knowledge it is only 0.0425 s.

For his proof of a finite speed of light, Rømer only used the observations of the first moon. Cassini reproached him as an omission that he should have used the observation of the other three as evidence for his thesis. Cassini and some others long followed René Descartes ' view that light spreads instantly. In contrast, Rømer's interpretation was soon accepted by Isaac Newton , John Flamsteed , Edmond Halley, and Christiaan Huygens . In general, the finiteness of the speed of light was not recognized until after James Bradley's discovery of the aberration of light in 1729.

A value for the speed of light was first calculated by Christiaan Huygens in 1678 with about 212,000 km / s in today's units. He used the Rømer run time of 22 minutes (= 1320 s). For half the earth orbit diameter ( astronomical unit ) he used 11,000 earth diameters, i.e. for the entire earth orbit diameter about 280 million km in today's units. In doing so, he relied on an indication of the solar parallax of 9.5 arcseconds, which Cassini had obtained from an observation of Mars in 1673 (from C. Huygens treatise on light, only published in 1690). Rømer certainly had access to these figures, but did not use them.