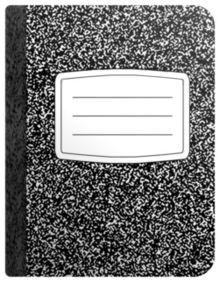 A notebook ( documented in Low German since the 17th century , actual meaning 'dirt', 'smear') or stratze is a preliminary draft , a concept and derived from it, probably as a short form of "Kladde book", a smear , sketch -, notebook or preliminary business book ( preliminary book). Synonymous is the French loan word Brouillon and the plural word Adversaria .

Notebooks are usually tightly bound and, depending on the intended use, contain either blank (blind) pages or pages that are prepared with lines or tables for entries. The contents of notebooks for accounting (also Strazzen called) is then in elementary , primary or account books transferred. The notebooks with red and black covers known today as Chinakladde were introduced to the German market by Gunther Lambert in the 1970s . In the military, a shooting book is a notebook or book in which the ammunition that has been issued and returned is entered.

In North German schools, the “notebook” is differentiated from the “fair copy”. In central and southern Germany one speaks of a manuscript or concept.