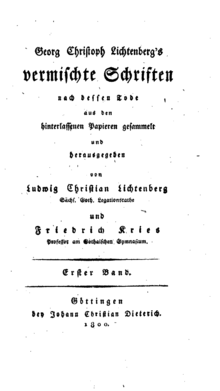 Title page of the first publication of a selection of the Sudelbuch notes, Göttingen 1800

Sudel books are the extensive personal notebooks and books left by the mathematician and physicist Georg Christoph Lichtenberg (1742–1799).

The author kept such booklets with aphoristic ideas and scientific short notes since his student days at the Georg-August-Universität Göttingen with regular entries for more than 30 years, from 1764 until his death. About two thirds of the estimated original inventory of manuscripts at Lichtenberg's death were preserved, a total of about “one and a half thousand printed pages [...,] 10,000 notes”. With a few exceptions, they are in the holdings of the Lower Saxony State and University Library in Göttingen .

At the end of the 18th century, the Göttingen professor of experimental physics was a well-known and respected natural scientist throughout Europe. Lichtenberg was also famous and notorious in his day for the satirical sharpness of his literary reviews and polemics. His time enduring fame but as "one of the most important and versatile representative of the Age of Enlightenment in Germany" and the founder of the German aphorism he owes just a work that was not known to the public in his lifetime, the only posthumously published Sudelbüchern .

In his Sudel books Lichtenberg collected his own aphoristically pointed ideas alongside excerpts and thoughts of others, fragmentary philosophical and literary reflections, satirical remarks and jokes about daily events and contemporaries as well as diary-like private thoughts and feelings. At the same time, the Sudel books always served him as a preliminary formulation of mathematical and scientific theses and considerations.

In the 19th century, the catchphrase “ aphorism ” was first popular as a collective term for Lichtenberg's personal notes. B. by Heinrich Laube (1839) or Friedrich Hebbel (1849). This classification was preserved in the public through popular partial publications and anthologies, as well as for the following 170 years in specialist German studies : The first text-critical edition of the Sudel books by Albert Leitzmann at the beginning of the 20th century is entitled “Georg Christoph Lichtenbergs Aphorismen ", And Leitzmann's assessment of Lichtenberg as a" classic of the aphorism, the witty or profound aperçus "led him consistently to restrict his publication strictly to the aphorisms and to exclude anything else.

Lichtenberg, on the other hand, used the term "aphorism" in his notes, but never referred to it in his own writing. The name Sudelbuch goes back to him, as his brother Ludwig Christian Lichtenberg noted in the "preliminary report" for the first edition of a selection of Lichtenberg's notes the year after his death . And already there, reference was made to Lichtenberg's own explanation of the use of the term:

"The merchants have their waste book (Sudelbuch, Klitterbuch, I believe in German), in which they enter everything they sell and buy from day to day, everything messed up, from this it is carried into the journal, where everything else systematically, and finally it comes to the Leidger at double entrance according to the Italian way of bookkeeping. In this, each man is billed separately, first as a debtor and then as a creditor. This deserves to be imitated by scholars. First a book in which I write everything, as I see it or as my thoughts give it to me, then this can be carried back into another, where the matters are more separated and ordered, and Leidger could then make the connection and the resulting from it flowing explanation of the matter contained in a neat expression. "

Wolfgang Promies , editor of the annotated edition of the Sudel books , which has been authoritative since the 1970s , took up this “deeply self-deprecating” (U. Joost) characterization of the records in the title of his complete edition 1968/1971; Subsequently, the name Sudelbücher established itself in literary studies and the public since the 1970s . Lichtenberg also used other equally ironic names for his notes ( Klitterbuch , Hausbuch , Exzerpten -Buch, Sparbüchse , Scribble Book , Thought Book ); Sudelbuch appears as his preferred term, entered in 1776 on the title page of book "F".

Since the first publication of parts of the Sudel books Lichtenberg by his brother Ludwig Christian Lichtenberg in the mixed writings (1800–1806), numerous excerpts from the Sudel books have appeared in popular editions, in aphorism selections and anthologies.

Even if the complete editions of the Sudel books were only available very late, their fragmentary publication made them influential on many writers and thinkers. This is what Kurt Tucholsky called his (literary) notebook Sudelbuch .

The Sudel books were included in the ZEIT library of 100 books .

Lichtenberg may have started making notes in the Sudel books while he was still at school, but this can no longer be reconstructed more precisely. Wolfgang Promies dates the beginning of the preserved records to autumn 1764, he also carefully notes that there may have been notebooks written before 1763. For these collections of thoughts, the author initially used folded notebooks himself - since the beginning of the 20th century, Lichtenberg research has referred to these oldest notebooks together as book "A". From 1768 on, Lichtenberg used prefabricated notebooks, which he marked with a Latin capital letter on the cover or the first page, beginning with Sudelbuch "C" in the early 1770s; on his death the author had reached the letter "L".

Lichtenberg kept his Sudel books with remarkable regularity - entries in a three-day rhythm - and with an increasing will to order: While he did not yet differentiate between scientific and other entries in the first booklets he received ("A"), he separated booklet "B" and the scientific ones Remarks. This subdivision is noticeable for the first time from Sudelbuch “D” within the text corpus itself: Lichtenberg described the front pages with scientific considerations, the back pages of the same notebook with general remarks and aphorisms.

With book "E" Lichtenberg developed a new method of page counting for himself: he wrote his notes in the same book from the front and back at the same time, running in opposite directions until the entries met in the middle: in the front part of "E" there are also "Travel notes" for the second trip to England (1774/75), numbered with Arabic numerals, the general remarks in the back, numbered with Roman numerals. Lichtenberg perfected this way of working in the later Sudel books to the effect that he collected the general thoughts and aphorisms in the front part with Arabic page counting, the scientific and philosophical considerations in the back part with Roman pagination, as in the Sudel books "J", "K" and "L", probably also in the lost books "G" and "H".

Issues in the 19th century

After the author's death on February 24, 1799, his older brother Ludwig Christian Lichtenberg (1737–1812) immediately claimed to be sent the previously unpublished written estate; he wrote to Lichtenberg's publisher, Johann Christian Dieterich :

“As far as all of his writing is concerned, be it letters or drafts, of which there will certainly be no tremendous burden , these do not have to be brought into sight of anyone . You alone will have the kindness to bring all these papers together with my sister-in-law, to wrap them up and keep them safe, by the safest way to send them to me. This caution is essential . You will understand me. "

Ludwig Christian Lichtenberg may have been interested in preventing publications that could have cast a bad light on his brother himself or on the family as a whole. A diplomatically formulated reference from the publisher to the possible quality of these notes and his own reading impression evidently prompted him to reconsider his verdict "Schreibereien" and extensive in the first two volumes of the mixed writings (9 volumes from 1800) To publish excerpts from his brother's Sudel books . The first edition he undertook together with Lichtenberg's student and friend, Friedrich Kries , led directly to the great success of the aphorisms in the 19th century and established Lichtenberg's post-literary fame.

Lichtenberg's sons, Georg Christoph (1786–1845) and Christian Wilhelm (1791–1860) followed this up when they went to an expanded new edition of the mixed writings on the occasion of their father's hundredth birthday . With the 14-volume work (from 1844), Lichtenberg's scientific writings were expressly excluded, as they “are not of any great interest to a larger audience anywhere, and, given the current state of science, they are no longer of significant interest to men in the field as a whole “The sons based their new edition on the edition principle prescribed by their uncle: like him, they arranged Lichtenberg's aphorisms according to subject groups, not chronologically. In addition, although they expanded the text corpus of the notes to include previously unpublished fragments, they also had to regret to discover that the manuscripts were no longer complete.

Apart from the antiquarian value, both editions of the mixed writings would actually be considered obsolete from a scientific point of view if they did not pass on content whose originals modern research can no longer fall back on, since the manuscripts - the Sudel books "G" and "H" as well as the largest part of book "K" - must be considered lost. Some speculations have been made about the reason for this loss, in particular that the family might have destroyed the books because Lichtenberg's love affairs with Maria Dorothea Stechardt (1765–1782) and his future wife, Margarethe Elisabeth Kellner ( 1768–1848), fell. Ulrich Joost does not rule out this connection entirely, but sums it up: "In view of the special intellectual structure of the surviving Sudel books, from which one might infer the lost, there is absolutely no probability."

The first and to this day (as of 2016) only text-critical edition of a selection from the Sudel books was undertaken almost 60 years later by the Germanist Albert Leitzmann between 1902 and 1908. Leitzmann abolished the subject group principle of mixed writings and instead sorted Lichtenberg's notes in chronological order. His lasting merit is that he “unearthed” Lichtenberg's estate from his grandchildren in 1896 and that his new edition of the Sudel books was strictly based on the handwritten originals. Leitzmanns was able to get the family to hand over the manuscripts to the Göttingen University Library so that they could be collected and preserved for research.

Leitzmann evaluated the scientific notes - similar to Lichtenberg's sons - and did not include them in his new edition. This was not helped until another 60 years later by Wolfgang Promies : For the first time he published a complete and extensively annotated edition of the Sudel books , thus laying the foundation for modern Lichtenberg research and for popular collections of aphorisms. Promies checked Leitzmann's work on the manuscripts, re-published it (Volume 1, 1968) and added the scientific and philosophical notes in the Sudel books that were not considered by Leitzmann, as well as the fragments from the mixed writings of the brother and the sons that were not preserved in handwriting Lichtenbergs (Volume 2, 1971).

Ulrich Joost set the provisional end of the editing history of Lichtenberg's Sudel books in 1992 with a publication that at first glance seemed quite inconspicuous: the previously inaccessible Noctes notebook , as a facsimile , with diplomatically faithful transcription of the entries, annotation apparatus and an afterword - an exemplary model for one historical-critical edition of the Sudel books , which is still a desideratum today (as of 2016).

Editions of the Sudel books

The following bibliographical details only list the editions that are important for the history of tradition and research: The editions of the brother (1800/01) and the sons of Lichtenberg (1844) brought about Lichtenberg's literary fame and contain entries for which the handwritten originals have been lost; Leitzmann's edition (1902 to 1908) is the only one that is diplomatic and text-critical; the issue of Promies (1968/71) is the only complete one. Finally, Noctes (1993) is the only surviving predecessor of the Sudel books; the facsimile edition by Germanist Ulrich Joost allows conclusions to be drawn about Lichtenberg's creative process.

Unless otherwise noted: All web links to digital copies of the Sudelbuch editions were last accessed on January 29, 2015.

Digitized copies of the manuscripts

The original manuscripts of the surviving Sudel books are stored in the Göttingen University Library and have been fully digitized since 2017 and are available online:

Unless otherwise mentioned: All web links of the comments last accessed on March 6, 2016.