The Goettingen State and University Library ( SUB Goettingen for short ) is the central university library of the Georg-August University of Goettingen and the library of the Goettingen Academy of Sciences . It is one of the largest academic libraries in Germany. Due to its supraregional tasks in the supply of literature, it received the additional designation State Library in 1949 . The best-known work in their holdings is a work of the UNESCO World Document Heritage. 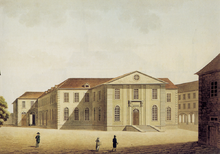 College and library building in the 18th century 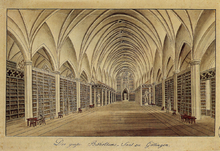 View into the historical hall ( Paulinerkirche ). Pen drawing attributed to Friedrich Besemann (1796–1854) (around 1820)

The library was founded in 1734. It was originally housed in the first college and library building of the Göttingen University, opened in 1737, which goes back to the building of a former Dominican monastery (Pauline monastery), initially on the upper floor of the central building around the inner courtyard.

The curator Gerlach Adolph Freiherr von Münchhausen was able to win Johann Matthias Gesner as the first director and acquire the extensive private library of Joachim Hinrich von Bülow (1650–1724) as the basis (on the condition that the Göttingen university library should permanently bear the name Bibliotheca Buloviana , what is apparently no longer the case today). The library began early on to follow a concept that was important for library history : the holdings were intended for scientific use, the individual titles were not acquired according to the criterion of display value, but rather according to their content, and a regular acquisition budget was set. Due to the planned inventory expansion , the library quickly became one of the most important libraries in Germany and a prototype of a modern university library. The holdings were made accessible through an extensive catalog system.

The long-time director (from 1763 to 1812) was Christian Gottlob Heyne , who was also a professor of classical philology . Heyne quickly turned the library into a nationally important and exemplary institution. He organized an interlibrary loan for scholars from abroad and, in addition to new German publications, procured literature from abroad through correspondence with other scholars, not only French, English and American, but also Arabic and Oriental literature. When he took office, the library held 60,000 volumes. When he died it had grown to 200,000 volumes. For comparison: The holdings of the University Library in Halle in 1795 only counted 20,000 volumes. Since the 18th century, the original Göttingen library building has been expanded with additions and extensions. B. 1812 by including the upper hall of the Paulinerkirche .

Extension, built from 1878 to 1882, today known as the "Prinzenstrasse building"

In the 19th century the development of the library ( now called the “Royal University Library” after the establishment of the Kingdom of Hanover ) stagnated due to the insufficient budget. The most famous librarians of this era were the brothers Jacob and Wilhelm Grimm from 1830 to 1837 .

The library was transferred to Prussian sponsorship in 1866 , and since the end of the 19th century the library has been included in the evolving system of supraregional literature supply (distributed inventory, Prussian, later German, general catalog, interlibrary loan). So that the library could do justice to these tasks, a large extension was built on Prinzenstrasse between 1878 and 1882, which today also houses the Heyne Hall, named after Christian Gottlob Heyne. The contemporary architectural style of this building set itself apart in its historicizing architecture from the previous classicist buildings and also had Prussian capped ceilings inside . It still stands today in the spacious forecourt of the old college and library building in Göttingen's old town. The building complex was last expanded in 1916 with a building for storage stocks.

In 1992 a new building designed by the architect Eckhard Gerber , the central library, was inaugurated after several years of construction on the university campus, which is adjacent to the auditorium building and the old town, at Platz der Göttinger Sieben . The floor plan of the building is based on a hand opening towards the old town. The storeys for the magazine are below the surface of the earth. In the northwest, a rotunda forms the entrance area of ​​the central library. Glass facades mark the south side of the building with the reading room. Since then, the headquarters of the Joint Library Association (GBV) has also been housed there.

The building complex called the historical building at the original location has housed the library's special collections since 1992. There is also a workshop for restoring books. The Paulinerkirche is used for exhibitions and events.

There are also several departmental libraries .

Between the 1920s and 2015, the library looked after numerous special collection areas , in addition to other subjects such as B. also the Anglo-American cultural area, within the framework of which the Virtual Specialized Library Anglo-American cultural area was developed. Your copy of the Gutenberg Bible , one of four complete parchment editions known worldwide, was included in the UNESCO World Document Heritage in 2001. In 2002 the SUB Göttingen was named Library of the Year .

Directors of the SUB Göttingen 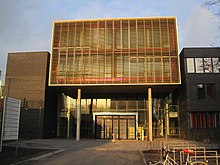 Collections in the historical building

As part of the collection of German prints , the SUB Göttingen collects publications from the 18th century.

The SUB Goettingen has maintained the Goettingen Digitization Center since 1997 . The SUB Göttingen also operates the university's own university publishing house , Göttingen , which has been expanding steadily since it was founded in 2003 and is committed to the open access principle. In 2004 the research and development department was founded, which is significantly involved in the development of new offers such as the establishment of virtual research environments and infrastructures for scientific data and services.

She oversees the specialist information services mathematics (since 2015, with the Technical Information Library in Hanover), Anglo-American Culture (since 2016, with the library of the John F. Kennedy Institute of the Free University of Berlin), solid earth geosciences (since 2016, with the German Research Center for Geosciences Potsdam) and Finnish-Ugric / Uralic languages, literatures and cultures (since 2017). She coordinates the establishment of a nationwide competence center for the licensing of electronic resources, in which, in addition to the Göttingen SUB, the Berlin State Library - Prussian Cultural Heritage and the central office of the Joint Library Association are involved.

Since 2014 the SUB Göttingen has been running the Göttingen eResearch Alliance together with the Gesellschaft für Wissenschaftlichen Datenverarbeitung mbH Göttingen (GWDG). She coordinates the joint project DARIAH-DE to set up research infrastructures in the humanities and cultural sciences in Germany and supports the consortium establishment of European and worldwide networked open access research infrastructures (OpenAIRE 2020, COAR eV).

Today's holdings would be unthinkable without sponsors and patrons. The reputation of the University of Göttingen, which had already been achieved in the 18th century, also triggered the patronage of its alumni. The American banker John Pierpont Morgan set up a foundation in 1912 with $ 50,000 that made it possible to buy Anglo-Saxon literature until 1967. In addition, numerous estates are administered by scientists.

Archives and libraries in Göttingen