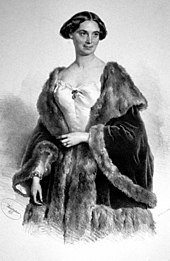 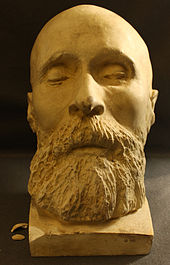 Christian Friedrich Hebbel (born March 18, 1813 in Wesselburen , Dithmarschen , † December 13, 1863 in Vienna ) was a German playwright and poet . His pseudonym in his youth was Dr. JF Franz . In addition to his main works, the two mourning pieces Agnes Bernauer and Maria Magdalena , love poems such as you will not see yourself again , when the roses bloomed forever , natural poems such as Sommerbild and Herbstbild as well as some ballads, including The Heideknabe or Liebeszauber and his diaries, are among the highlights of his work as well as the literature of realism . His drama Nibelungen is the most important adaptation of the epic for the theater.

Friedrich Hebbel was born as a Danish subject , as Dithmarschen was an area of ​​the Duchy of Holstein until 1864 . Only after his death in 1867 did it belong to the Prussian province of Schleswig-Holstein . His parents were the bricklayer Claus Friedrich Hebbel and the shoemaker's daughter Antje Margaretha (née Schubart).

In 1819 he attended elementary school and then worked briefly as a bricklayer's apprentice at the age of 13. When the Hebbel family had to leave their house because their father's guarantee had not been redeemed, their social situation deteriorated significantly. After his father's death in 1827, Hebbel entered the service of Parish Governor Mohr - Christian Otto Mohr 's father - with whom he advanced from an errand boy to a scribe, albeit living in modest circumstances. So he had to share his alcove under a staircase with a coachman. During the seven years he worked for the Vogt, Hebbel, who had always enjoyed reading, was able to fall back on his library. His first poems were written in the clerk's room, some of which were published in the Eiderstedter Bote . He also built a theater in a barn.

In 1832 Hebbel published more poems in various magazines such as Iduna and the Neue Pariser Modebl Blätter . Thereupon Amalie Schoppe , the editor of the New Paris Fashion leaves , attention to Hebbel. She supported him materially and brought him to Hamburg in 1835, where he was active in the Scientific Association from 1817 . In Hamburg he met the seamstress Elise Lensing , who was nine years his senior , with whom he fell in love and who supported him. On March 18, 1835, he began to keep a diary.

Thanks to a scholarship, he moved to Heidelberg in 1836 , was in the meantime visiting lecturer at law lectures, but at the same time completely penniless. On September 12th he began a walk via Strasbourg, Stuttgart and Tübingen to Munich, where he arrived on September 29th. There he was taken in by the carpenter Anton Schwarz, who presumably also provided the model for the figure of the "master carpenter Anton" in Maria Magdalena (1843). In Munich he also attended lectures by Joseph Görres , a supporter of the democratic movement. Hebbel's mother died in late 1838.

In 1838 Hebbel was still living under poor conditions with the carpenter, with whose daughter Josepha Beppi Schwarz he fell in love for a short time. On February 10, 1839, he wrote a letter to Elise about his stay in Munich:

“This city is unique in Germany and without equal; you can live in it how you want, whoever likes it, plunges into the rushing, big-city bustle, and who does not like it, withdraws into solitude. [...] A significant period of life is linked to my stay here, which would probably not have become so important if I had been less isolated. "

- Friedrich Hebbel : His life in texts and pictures

In 1839, after his only Munich friend Rousseau had died, he returned from Munich to Hamburg without provisions from March 11th to 31st, where Elise Lensing took him in and cared for him when he became critically ill as a result of the exertion. In 1840 Elise gave birth to a son who was baptized two years later in Wandsbeck (which at that time belonged to Holstein ) with the name Max Hebbel, since illegitimate children in Hamburg were not allowed to use the father's family name. That year he completed the tragedy Judith . The first performance of this piece took place on July 6, 1840 in Berlin, which Hebbel was very pleased with. In 1841 the tragedy was printed and made his name known in Germany. He then wrote the tragedy Genoveva , which was first printed in 1843; he also completed the comedy The Diamond , which he had already started in Munich. Hebbel's drama Genoveva was the occasion for Robert Schumann 's opera Genoveva of the same name , the libretto of which the composer had to write without the requested support from the poet. Other composers for Hebbel fabrics were later among others Eduard Lassen , Franz Liszt and Johannes Brahms .

In 1842 his first collection of poems appeared, which in 1857 was enlarged and improved as a complete edition with the dedication to Ludwig Uhland . Hebbel also traveled to Copenhagen , where he received a two-year travel grant from the Danish King Christian VIII , with which he then went to Paris , where he met Heinrich Heine and Arnold Ruge and made friends with Felix Bamberg . He began to suffer from rheumatoid arthritis and wrote the civil tragedy Maria Magdalena, which was finished in December 1843 , while he was fighting violent arguments with Elise, who was again pregnant (by himself) . In Hamburg, meanwhile died, his son Max. For a while he was the telegraph for Germany by Karl Gutzkow active, but the feel of the fluctuating indecision Young Germans repelled.

In 1844 his second son Ernst (1844–1847) was born, which is why Elise increasingly urged them to marry, which Hebbel refused. Hebbel spent 1844–1846 in Italy, traveled via Lyon , Avignon and Marseille to Rome , soon afterwards visited Naples and returned to Rome in the autumn. At the end of this time he traveled to Vienna via Ancona , Trieste and Graz . There the brothers Zerboni di Sposetti, two Polish aristocrats, noticed him, helped him out of his recent financial hardship and introduced him to higher society. Hebbel decided to stay in Vienna. In the same year he received a PhD in absentia from the University of Erlangen due to a dissertation that was sent in. phil. PhD. In 1845 he met the literary historian Hermann Hettner , who dealt with Hebbel and joined him.

“I got engaged to Fraulein Enghaus; I certainly did it out of love, but I would have sought to master this love and continued my journey, if the pressures of life had not become so heavy on me that in the inclination which this noble girl turned to me I would have my only salvation had to see. I do not hesitate to make this confession outright, no matter how much I would lose if I had a young German as a judge "

- Friedrich Hebbel : His life in texts and pictures

The marriage brought him secured prosperity, so that he could devote himself to his literary production undisturbed. He mainly wrote dramas, including Agnes Bernauer, Gyges and his Ring and The Nibelungs. His greatest success was the 1843 drama Maria Magdalena. Hebbel received public recognition for his work in Vienna.

With the marriage of Hebbel the letter contact with Elise broke off haltingly. For Elise Lensing, who had always stood by Hebbel, a world collapsed, and only through Christine's loving manner could she be reconciled with Hebbel, often described as harsh; so Christine and Elise were soon good friends. She even gave her illegitimate son Carl, not from Hebbel, to bring up in Hamburg. Elise wrote to Hebbel in 1853:

- Elise Lensing : His life in texts and pictures

Hebbel was always socially and politically engaged. He welcomed the March Revolution , but took a fundamentally loyal stance to the form of government of the monarchy . In 1849 he ran unsuccessfully for the Frankfurt National Assembly , although he was always skeptical of radical democratic demands.

In his works he often depicts tragic, fateful chains of events and makes the social problems of his time the topic. With sharp words he turned against the poetry of his contemporary Adalbert Stifter , which he felt as an empty idyll. The quick-tempered Hebbel seldom avoided controversy. When Heinrich Laube, whom he often criticized, became director of the Vienna Burgtheater , his wife Christine suffered as a result; she only got small roles, if at all. Hebbel also had no access to Austrian theater greats like Franz Grillparzer . However, despite the riots, he got to know some personalities in Vienna, including Prince Friedrich zu Schwarzenberg , who represented a truly important person for Hebbel . Hebbel was with him often and gladly.

As a publicist he wrote for the Wiener Zeitung , the Augsburger Allgemeine Zeitung and the Illustrierte Zeitung from Leipzig, among others .

When Elise Lensing died in 1854, Hebbel had her grave decorated with the following words:

Wreaths of flowers are carried away by the slightest west wind,
Crowns of thorns, however, not the most powerful storm!

After Elise Lensing's death, Hebbel wrote regular letters describing his activities. Hebbel kept this one-sided letter contact until the end of 1862. On November 7, 1863, Hebbel was awarded the Schiller Prize.

In the last years of his life he suffered increasingly from rheumatism , probably a late consequence of the years of privation before he moved to Vienna. However, even after settling in Vienna, he traveled within Austria. Friedrich Hebbel died on December 13, 1863 in his apartment at Liechtensteinstrasse  13, Vienna-Alsergrund , at the age of 50. He rests at the Matzleinsdorf Evangelical Cemetery in Vienna at the side of his wife (Gr. 19, Gruft 38).

The Hebbel House is in Wesselburen , and it housed the Hebbel Museum from 1911 to 1952 before it was moved to another house in the city. In front of it is a bust of Hebbel from 1913 by Nicolaus Bachmann. In 1869, Hebbelgasse in Vienna- Favoriten (10th district) was named after him, and in 2005 Christine-Enghaus-Weg in Penzing (14th district) was named after his wife. There is also a memorial plaque for Hebbel in the Gmunden summer house. The kk Hofburgtheater had a memorial plaque attached to the house where they died. The Hebbel Theater has existed in Berlin since 1908 .

Numerous poems of Hebbel were set to music. The opera Genoveva by Robert Schumann based on Hebbel's play of the same.

Like his wife, his granddaughters Christine and Therese also became actresses. 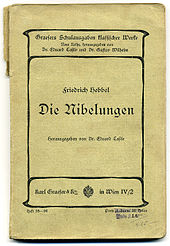