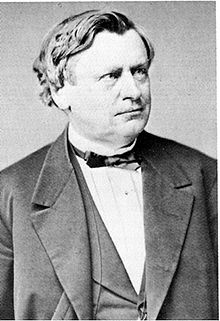 Hermann Hettner was born as the second son of the manor owner Karl Friedrich Hettner (1788–1867) and Anna Helene Döring (1788–1847) on Gut Niederleyserdorf near Goldberg. From 1833 to 1838 he attended high school in Hirschberg , studied philosophy and philology in Berlin , Heidelberg and Halle , but turned from philosophical to art and literary history studies from 1843, namely during a stay in Breslau . For this purpose he undertook a multi-year trip to Italy in 1844 , stayed mainly in Rome and Naples and did not return to Germany until Easter 1847. As a result of the Italian trip, the pre-school for the fine arts of the elderly (Oldenburg 1848) and the Neapolitan painting schools (in Schwegler's yearbooks ) appeared.

Hettner completed his habilitation in Heidelberg in 1847 as a private lecturer in aesthetics and art history. In 1848, the year of the revolution, he made friends with the philosopher Ludwig Feuerbach , the Dutch natural scientist Jakob Moleschott and the Swiss poet Gottfried Keller . In the same year he married Marie, daughter of the statesman Freiherr von Stockmar from Coburg. This marriage produced three children, including the German archaeologist Felix Hettner .

Hettner's work The Romantic School in connection with Goethe and Schiller appeared in 1850, like almost all of his other writings, by Eduard Vieweg's publishing house in Braunschweig . The work prompted his appointment to the University of Jena , where he went at Easter 1851 as an associate professor of aesthetics, art and literary history. In the summer of 1852 he went on a trip to Greece with the classical philologists Karl Wilhelm Göttling and Ludwig Preller , which he described in the Greek travel sketches (1853). His book The Modern Drama (1852), which he wrote in close correspondence with his friend Keller, had been published before that.

In 1855 Hettner was appointed director of the royal collection of antiques and professor of art history at the Academy of Fine Arts in Dresden. A year later his wife Marie died, with whom he had three children. In 1858 Hettner married Anna Grahl, daughter of the Dresden painter August Grahl . From this marriage there were seven more children, among them the geographer Alfred Hettner and the Saxon politician and judge Franz Hettner . The Hettners lived on Wiener Straße and in the summer months the now large family rented the so-called "Villa Betti", which was adjacent to the Villa Rosa property . 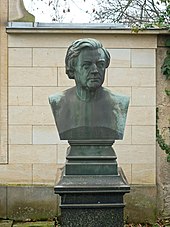 By taking over the management of the historical museum and being appointed full professor of art history at the royal polytechnic , Hettner's Dresden sphere of activity expanded significantly. Even before he left Jena, the first part of his comprehensive main work: The History of Literature of the 18th Century , which was completed by 1870 and deals with English, French and German literature (1855–79 in several editions). This literary history, which is both scientific and, thanks to its lively, captivating presentation, also popular, is one of the most ingenious and effective works of the 19th century.

After completing his literary history, Hettner turned mainly to art historical studies on the history of the Renaissance , the first fruit of which was the Italian Studies (1879).

Hermann Hettner died on May 29, 1882. His grave is in the Old Annenfriedhof in Dresden.