Heide ( Low German De Heid or short Heid ) is a city in Schleswig-Holstein and the county seat of Dithmarschen .

The urban area of ​​Heide is located on the western edge of the Schleswig-Holstein Geest in the northern part of the Dithmarsch district area northeast of the Meldorfer Bucht . To distinguish it from other places with the same name, the addition “i. H. "/ spoken" (in) Holstein "used.

The 1987 census in Germany registered the population on the basis of the following list of places to live. After that, the city was divided as follows:

In addition, the city is often pragmatically divided according to the four main directions into Heide-Nord and Heide-Süd as well as Heide-Ost and Heide-West . 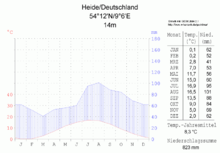 Heide is mentioned for the first time in 1404 as Uppe de Heyde . According to a chronicle from 1577, the villages Rickelshof, Lohe, Wesseln and Rüsdorf decided in the 14th century to build a chapel - or, according to another source, an inn - at the intersection of their areas. As early as 1434, Heide was mentioned as a meeting place for the peasant republic. In 1447 the Dithmarscher Heide elected the upper court of the forty-eight and secured the status of the place as one of the Dithmarsch main towns next to Meldorf . Up to 12,000 able-bodied men could gather on the 4.6 hectare square for the state assemblies. A St. Jürgen chapel, consecrated to St. George , is attested on its edge as early as 1437 .

On December 10, 1524, the former monk Heinrich von Zütphen , who had come to Meldorf at the invitation of Nicolaus Boie at the end of November to preach Protestant doctrine, was burned on the market square . The Reformation did not take hold until eight years later.

Even if Dithmarschen lost its independence after the last feud in 1559 and Heide was completely destroyed in the process, Heide retained its importance as a trading place and seat of the administration of the Dithmarschen region. The former meeting place now only served as a marketplace. The church, originally made of field stone , was rebuilt from bricks and consecrated again the following year. The tower was added in 1611 and renewed in 1724.

1877 was Heide by the West Holstein Railway Company in Station Heide first railway connections to Neumünster and Tonning , the November 1, 1878 by the integration of Marschbahn to direct connections to Hamburg and ten years later, just after Husum have been extended. From 1905 to 1938 there was the premises of the Norderdithmarschen district railway opposite the station , which opened up the district with two routes.

From 1867 to 1971 Heide was the seat of a local court. On July 7, 1870, Heide received city ​​rights . Heide was the district town of the Norderdithmarschen district .

Despite the absolute majority for the NSDAP in the local elections in 1933 with 57.7 percent, the German national mayor Hermann Hadenfeldt remained in office for the time being. In 1937, however, Hadenfeldt gave up his office prematurely and Karl Herwig was appointed mayor. After the war, the British appointed August Vehrs mayor.

During Operation Gomorrah , the US bombers of the 381st bomb group dropped their bomb load on the afternoon of July 25, 1943 only during their return flight to the North Sea over Heide.

On October 9, 1924, the village community of Rüsdorf, which until then belonged to the parish of Weddingstedt , was incorporated. On January 1, 1968, the previously independent municipality of Süderholm was added. This corresponded geographically to the municipality of Süderholm-Bennewohld, which on April 1, 1934 was divided into the new communities of Bennewohld and Süderholm. Bennewohld was incorporated into Süderholm on April 1, 1943. 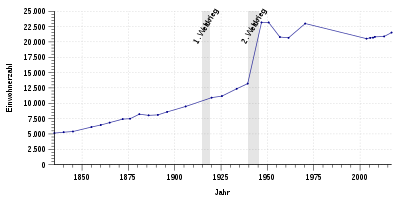 The graph shows a typical increase in the number of inhabitants for the region. After the Second World War, Dithmarschen and Eiderstedt (together under 120,000 inhabitants at the time) became the Allied internment area for up to 400,000 Wehrmacht soldiers (restricted area G). During the war and afterwards, a large number of refugees from the former eastern regions of Germany were taken in and permanently settled in Heide.

Since the local elections on May 6, 2018 , the 29 seats (+ 2) in the council assembly have been distributed among the individual parties as follows (in brackets: difference to the number of seats after the local election on May 26, 2013 ):

The mayor of the city of Heide has been Oliver Schmidt-Gutzat (SPD) since September 30, 2018. His deputies are Marc-Friedrich Trester (CDU) and Manfred Will (SPD).

Michael Stumm (CDU) is the mayor of the city of Heide. His deputies are Hülya Altun (SPD) and Carsten Dethlefs (CDU).

The municipal coat of arms of Heide was designed by the Brunsbüttel heraldist Willy "Horsa" Lippert and approved on January 31, 1952.

In red, the figures of the city's coat of arms are all in white without a shield, accompanied by a narrow white stripe at the top and bottom near the edge.

St. Jürgen Church from the south-east

The light-flooded church stands on the south-west corner of the market square and was built on the foundation walls of the previous building, which was completely destroyed in a fire in 1559. 1694–1696 the building was expanded and in the same century a gallery was added on the north side, on which scenes from the Bible are shown in pictorial representations. In 1724 the church was enlarged to a hall church with a new, wider choir and the tower built in 1611 was redesigned as you can still see it today. A sandstone baptismal font was taken over from the old church. The shrine of a Gothic carved altar on the south wall is presumably composed of two older altars. The pulpit from the time of construction with depictions of scenes from the life of Jesus with inscriptions in Low German comes from the time of the new building, the baroque altar from 1699. Outside the church on the south side there is an atonement stone that was made in pictures and words by one in 1567 Homicide reported.

The old pastor's office is located on the south side of the Heider Marktplatz, opposite the St. Jürgen Church. The building was built in 1739 by Johann Georg Schott.

Today the Protestant church office is located there.

The city has the largest undeveloped market square in Germany (4.7  ha ). The traditional weekly market has been held here for over 500 years. It is the former meeting place of the state assembly of the free and independent peasant republic Dithmarschen (1447–1559). 48 regents met every Saturday, created laws, issued justice, levied penalties, received or sent embassies. 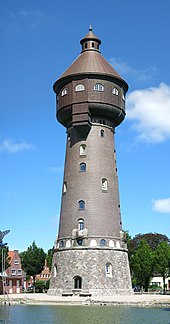 The Heider water tower , built in 1903 and completely renovated in 2004, with the wedding room of the Heider registry office is worth seeing.

The Lüttenheid Museum Island is not far from the market square in the former Lüttenheid craftsmen's quarter. Since 2004 the area has housed the Heider Heimatmuseum and the Klaus Groth Museum .

The focus of the Heider Heimatmuseum is on the founding time of Heide at the time of the Dithmarsch peasant republic and the Heider world in the 19th and 20th centuries. This is illustrated by numerous original objects.

The Klaus Groth Museum is the birthplace of the poet Klaus Groth (1819–1899), who is considered the most important Low German poet. The family's former miller business was converted into a museum in memory of the poet in 1914 after the city bought and completely renovated the dilapidated building. Furthermore, the furnished house gives an impression of the living conditions of the 19th century.

At the Brahms House (after Johannes Brahms ) you can find a plaque under the gable on the front with a reference to the Brahms family, who owned the house from 1819 to 1887. The Brahms Society Schleswig-Holstein, founded in 1987, has created a place of remembrance for the composer here. The house is a cultural attraction and houses an exhibition and a library with literature on Johannes Brahms. Concerts, lectures and courses as well as the planning for the award of the Brahms Prize also take place here. 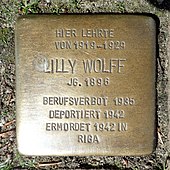 In Heide there are seven stumbling blocks in memory of victims of National Socialism .

Since July 2007 the city of Heide has been advertising with the slogan "Market town in the North Sea wind".

For the trotting races of the Ditmarsia trotting club, founded on March 4, 1904, a 500-meter-long trotting track was built, which was inaugurated on June 16, 1907. In 1924, the Traberclub, together with the newly founded Dithmarscher Automobil-Club (DAC), decided to build an automobile and motorcycle racing track, which was completed after just seven weeks of construction and was one of the most modern and fastest autodromes in Europe. "The track was 1250 m long, 10-12 m wide and had a curve superelevation of 45-50 degrees". Up until 1932, eighteen races in various automobile and motorcycle classes took place on this oval track, some as German championships. The track record held by Soenius on the Fichtenhain racecourse is 143.2 km / h. [Compiled from Ernst Peters: The great automobile and motorcycle races - Fichtenhain racecourse 1925–1932: The rise and fall of a sports facility in Heide. Pro Business, Berlin 2013.]

The station of Heath is a railway junction in Schleswig-Holstein railway. This is where the Neumünster – Heide and Heide – Büsum lines meet the Marschbahn . The station is a system stop in the Schleswig-Holstein local transport network . The RE 6 ( Hamburg-Altona - Westerland (Sylt) ), as well as the RB 62 ( Heide - Itzehoe ) and RB 63 ( Neumünster - Büsum station ) operate at the station .

The station is also served by long-distance trains. Individual connections within the IC line network of the Deutsche Bahn subsidiary DB Fernverkehr are tied through in Hamburg via the Marschbahn to Westerland / Sylt.

The direct settlement area of the city in public transport by two city bus lines opened (line numbers 2901 and 2902 in Nahverkehrsverbund Schleswig-Holstein), which run every half-hour clock. The operator is currently (as of 2020) the company Autokraft , a subsidiary of the Deutsche Bahn Group . In addition, there are regional bus connections to the surrounding area of ​​the entire northern district of Dithmarschen.

At the heart of urban and regional bus traffic are the previously separate stations, train station and central bus station . The Heider Stadtverkehr lines have been departing from the new combined platform at the station since December 2013 . The complete relocation of the central bus station to Heider Bahnhof was originally planned for 2015, but is still in the planning phase.

The nearest regional airport is Heide-Büsum airfield , from here regular OFD flights to Helgoland are offered several times a day . The nearest airport is in Hamburg-Fuhlsbüttel , which can be reached in an hour.

The fields of technology and agriculture at the vocational high school of the BBZ Dithmarschens are being relocated to Heide in steps; however, the technicians are dependent on the technical equipment in Meldorf, which does not (yet) allow the Meldorf site to be completely excluded.

The West Coast University of Applied Sciences (FHW; Fritz-Thiedemann-Ring 20) is the youngest university of applied sciences in Schleswig-Holstein. It offers the following courses: 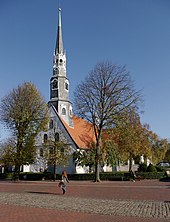 Municipalities in the Dithmarschen district