Long-distance traffic is a common term for the movement of people and goods with road or rail vehicles as a realized change of location over long distances. The term comes from a time of extensive regulation of commercial goods traffic , which was largely abandoned in the course of the liberalization of the transport market. In this area, the term has mainly been used in everyday language. In public passenger transport in Germany and Switzerland, however, there is a sharp distinction between long-distance and local transport (Germany) and regional transport (Switzerland). The remote traffic gets here an indirect significance in that the public transport (PT) is particularly regulated.

In the history of long-distance road haulage in Germany, there has been strict regulation of commercial road haulage since the emergency ordinance for overland transport of October 6, 1931 . The competition between road and rail transport was to be regulated by introducing compulsory concessions, through allocation of quotas and through the price regulations according to the Reichskraftwagentarif (RKT). A distinction was made between factory traffic and commercial goods traffic, and a local traffic zone of 50 kilometers was defined. Later the regulation of wartime economic reasons was in the foreground. 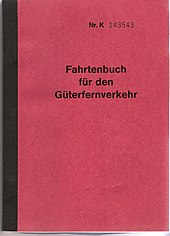 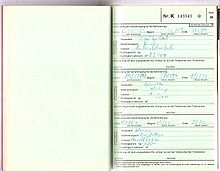 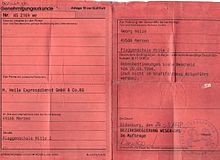 In the area up to 50 to 150 km, the quota in the "district long-distance traffic " was much stricter and long-distance drivers called it the "blue line" , which had to be used from the registered location of the truck. Every policeman could tell the difference by the color of the license (license) that was inserted in the corresponding red logbook . Some hauliers had wrapped the logbook with a blue protective cover. In this log book, all tours had to be entered with the official registration number of the truck, the description of the goods, weight and date, just as they were included in the waybill. The entries had to be made in addition to the speedometer disc , as both were based on different legal bases and different authorities were responsible for this. It was the same with the so-called “red line” , which had to be used as a concession by the transport company from the truck location or over 50 or 150 km. From the logbook, in which carbonless paper was inserted, the white original sheets had to be removed every month and sent to the BAG Cologne for checking by the transport company, including the waybills .

In general long-distance commercial goods transport, a white sign with a diagonal blue, red or yellow line had to be attached to the outside of the vehicle by the end of 1972. There was cross-border long-distance freight transport, the Rosa and later the Neu Rosa permit in the FRG.

The licenses could be removed from the logbooks and inserted into new ones, since the licenses were mostly still valid when the logbook was already filled.

Not subject to a license (and therefore also not subject to a driver's log) were empty and transfer trips, as well as trips on behalf of a sovereign and trips on their own behalf (so-called works traffic ).

As a result, neither the license nor the logbook were issued for a specific vehicle. The result was that every freight forwarder had more trucks than licenses and that it was part of the work of the dispatchers to ensure that the truck had a license and a logbook.

With a clever choice of location, cross-border long-distance transport could be operated even without the so-called large concession (long-distance transport concession ) if the location was no more than 50 kilometers away from the state border and legal domestic local transport was thus carried out up to the state border. An attempt was also made to legally circumvent the strict regulations by combining road and rail traffic (so-called rolling road ).

The indirect consequence is that in Germany in long-distance passenger transport only self-operated transports exist. Until 2013, long-distance bus services were not approved if there were parallel rail services. Exceptions were connections to Berlin , which were approved due to the special political situation before 1990. De facto, this resulted in a monopoly for the railway in long-distance passenger transport by land. With the amendment of the PBefG on January 1, 2013, long-distance bus traffic was permitted. New providers such as Flixbus or DeinBus.de have since expanded the long-distance bus network in Germany considerably. However, there is to protect the publicly funded transport a Move service ban for remote buses when parallel SPNV exists or the distance between stops is less than 50 km.

In its group structure, Deutsche Bahn has taken into account the regulation of local passenger transport by setting up the independent DB Fernverkehr AG for long-distance passenger rail transport . The price system introduced by Deutsche Bahn in 2002 does not differentiate between long-distance and local transport, but consists of three product classes for high-speed , IC / EC and regional transport . The system has replaced the surcharge rules previously used for the different train types . With regional transport tickets, the transition to long-distance trains was made more difficult. There is no kilometer limit in product class C (regional trains), tickets in this product class are therefore valid for long-distance connections across Germany, but it is not possible to transfer to trains operated by DB Fernverkehr AG . Examples of tickets in product class C with nationwide validity on regional trains are the Quer-Durch-Land-Ticket or free travel for the severely disabled .

An explicit distinction is made between long-distance and local transport in terms of financing, taxation of sales tax ( Section 12 (2) No. 10 UStG ) and the rules for granting compensation for disadvantages for severely disabled people in local public transport ( Section 230 SGB ​​IX ). The federal states are responsible for financing local transport. The local traffic area therefore comprises one federal state and thus shows considerable differences in size and possible distances (including Bavaria compared to Saarland ). The connection Minden → Aachen (approx. 310 km, NRW tariff ), for example, is considered "local transport" , long-distance transport is the route Hanover → Dortmund (200 km). A distance of 50 km is set as the limit for the local area for taxation.

In addition to the transport services advertised by the federal states, DB Regio also provides services on orders from DB Fernverkehr, which are provided as self-commercial Interregio-Express connections. The Interregio-Express train type counts as local transport . On the one hand, the commercial offers consist of local transport tariffs and vehicles; on the other hand, they are on a par with long-distance transport in terms of financing and, in some cases, travel time. DB Regio's competitors also operate train connections on their own, e.g. B. Abellio Rail Central Germany with the Harz-Berlin-Express and Flixmobility GmbH with their long-distance train Flixtrain .

In public passenger transport, Switzerland differentiates between local, regional and long-distance transport. Long-distance traffic connects parts of the country and regions with one another.