Robert Gernhardt was born the son of a judge and a chemist in Reval . The Gernhardt family belonged to the Baltic German minority in Estonia and had to move to Posen in 1939 .

In 1945 his father died as a soldier in World War II . After the end of the war, the mother fled with the sons Robert, Per and Andreas via Thuringia to Bissendorf . In 1946 the family came to Göttingen . After completing his school education in 1956, Gernhardt studied painting at the State Academy of Fine Arts in Stuttgart and the Academy of Arts in Berlin as well as German at the Free University of Berlin . From 1964 he lived as a freelance painter, draftsman, caricaturist and writer in Frankfurt am Main. In 1972 he bought an old building in the Arezzo area in Tuscany , where he spent a lot of time from then on. In 1965 he married the painter Almut Ullrich , who died in 1989. In 1990 Gernhardt entered into a second marriage with Almut Gehebe . In 1996 he had to undergo serious heart surgery. Gernhardt was a scholarship holder at the Wissenschaftskolleg Berlin in 1999/2000 and spent a short time in 2006 as a resident author at the University of Warwick in England. On June 30, 2006, he succumbed to colon cancer in Frankfurt , which he had known about since July 2002. He was buried in the main cemetery in Frankfurt .

From April 1964 to December 1965 Gernhardt was the editor of the satirical magazine Pardon , where in 1964 he was one of the co-founders of the nonsense supplement Welt im Spiegel , which appeared until 1976 and which significantly and significantly influenced newer humorous literature. Gernhardt had a number of exhibitions and participations in exhibitions in Berlin, Frankfurt am Main, Basel and Regensburg, among others. He was a member of the German Association of Artists . Along with FW Bernstein , FK Waechter , Clovis Poth , Eckhard Henscheid , Bernd Eilert , Peter Knorr and Hans Traxler was he co-founded the New Frankfurt School whose publication listed in the Journal pardon the satire magazine Titanic was. In 1974, Hessischer Rundfunk ran six episodes of the radio show HELP, a satirical auxiliary magazine that was created in collaboration with Peter Knorr. From 1975 to 1978 8 episodes of the television program Dr. Muffels Telebrause , a comedy show by Robert Gernhardt, Bernd Eilert and Peter Knorr. In the 1980s, Gernhardt co-wrote various Otto shows with Eilert and Knorr under the acronym GEK Group . He also edited books by Otto Waalkes and was involved in the script of four "Otto films".

Gernhardt had already published poems since the early 1980s ( Wörtersee , 1981) and was increasingly recognized by critics as an important poet in the course of the 1990s. Particularly noteworthy are the poetry volumes Soft Goals (1994), Heart in Need (1996), Lichte Gedichte (1997), Die K-Gedichte (2004) and Später Spagat (published posthumously in 2006).

Today he is considered one of the most important contemporary German-language poets. His work has developed from the nonsense verses and the humorous forms of the 1960s and 1970s to a versatile lyric poetry, which Gernhardt always added new tones. Gernhardt processed the accompanying circumstances of his heart operation in the poem cycle Herz in Not, which consists of 100 rhyming seven-line poems . He also wrote several poems about his fight with cancer from 2002, which represent the first part of the K poems . Since 2003, he read in the mission of the presses in the ARD regularly a time-critical sonnet . In the 2005/2006 winter semester, as a Heine visiting professor, he held the same lectures on poetry at the Heinrich Heine University in Düsseldorf that he had given five years earlier as part of the Frankfurt Poetics Lectures .

Gernhardt's estate is in the German Literature Archive in Marbach . From the 40,000-page records in the so-called "well" -Heften the band in 2011 was Toscana mia published containing a selection from Gern Hardt notes, verses and drawings until 2005, he in his house during the 1979 Tuscany to Brought paper.
Parts of the estate can be seen in the permanent exhibition of the Modern Literature Museum in Marbach.

Robert Gernhardt later commented on his use of pseudonyms while working on Welt im Spiegel (WimS):

“Group meetings in inns, outside of working hours, initially without any idea of ​​exploitation; During working hours we did all kinds of editorial work, we also scourged the grievances, Weigle as Hermann Rabe, FW Bernstein or Bernhard Schuster, I as Mr. Kin , Lützel Jeman , Paul H. Burg , Arthur Klett or Alfred Karch  ... is an important date then February 1970. From then on we did WimS on our own ... 1971 is another crucial date. Lützel Jeman gives up his pseudonym ... I then took it in a long, strategically broad transition process similar to that from Coca Cola to Coke from Lützel Jeman to Robert Jeman Gernhardt to Robert Gernhardt "

The narrators in his stories often have names like G or Norbert Gamsbart and are apparently based on the name of the author. With their help, Gernhardt was able to spread views that were essentially his own, but from which he could distance himself at any time by pointing out that it was not he, but his fictional character that had expressed them.

Hans Mentz is a collective pseudonym under which various authors write the column of humor criticism in the satirical magazine Titanic .

In December 2008, donated Helaba in memory of Robert Gernhardt to the Hessian Ministry of Science and Art settled Robert Gernhardt Prize (now Robert Gernhardt price). It has been awarded annually to two Hessian authors since 2009 in order to support them in realizing a special literary project. The prize money for each winner is 12,000 euros.

Translation of the works

Films with and about Robert Gernhardt 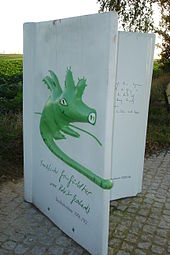 Frankfurt green armadillo on the back of the mountain