Otto - Der Ausserfriesische is a German comedy film from 1989 . After Otto - The Film and Otto - The New Film, it is the third feature film by and with comedian Otto Waalkes . The film opened in German cinemas on July 13, 1989. Like all other Otto films, this one is characterized by Waalkes' humor. It is based on word games and verbal jokes as well as situation comedy .

The multi-billion dollar industrial group High Speed ​​Unlimited wants to build a test track for its 1000 km / h high-speed trains in East Frisia . The only obstacle that stands in their way is the old, bright red and yellow painted lighthouse right on the dike to the Wadden Sea . Otto Groß lives in it , a friendly and enterprising tour guide who sells tourists mini lighthouses made from toilet paper rolls and also runs all kinds of errands for his fellow men. His vehicle is an Autobianchi Bianchina convertible . His heart secretly belongs to the kindergarten teacher Frauke , the niece of the local country noble Baron von Platt . However, she doesn't want to know anything about him, because she was with Otto's older brother Benno before and everything in the lighthouse reminds her of him.

Otto, who has been living in the shadow of his brother for years, removes all signs of Benno's existence for Frauke's sake. In this situation, two front men from High Speed ​​Unlimited appear , who want to immediately buy the strategically important lighthouse from Otto. Frauke can prevent this at the last moment and enlighten those present: Benno Groß, not Otto, is the owner of the lighthouse and only he can sell it. After Otto sneaked in at High Speed and recognized their sinister plans, he confronts the citizens of his homeland. He learns: If Benno, who has meanwhile emigrated to the USA , does not return by a certain point in time and plant a tree as a token of his ownership claims, then he will lose this and High Speed ​​Unlimited could deface the area for their train route. Otto immediately sets off for the United States to find Benno and save his homeland (and impress Frauke). But at the same time high-speed Group boss van Devil found that Benno is the lighthouse owner, and sets his elimination Latin American hitman El Cucaracho on both systems. 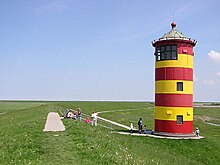 After he arrived in Miami , Otto was confronted not only with difficulties understanding the language of the locals but also with problems with the customs of the Americans. He wears down a taxi driver, is robbed and ends up in a film. After several quarrels, he finally finds Benno, who works as a private detective under the name Big Ben . After good persuasion (and the Frisians' oath as leverage), the vain Benno finally agrees to return to Friesland. Otto slips into the role of his twin brother to do his current job, which is about adultery . The client is in truth El Cucaracho , who is supposed to kill Otto (Benno) on behalf of van Devil . Otto can destroy the death trap in the form of a bomb by means of a remote-controlled car and push the explosive device to El Cucaracho , which it kills.

Otto then returns home, where everything has remained unchanged: the houses and his lighthouse are still there, van Devil and his henchmen and Baron von Platt were arrested and have to perform detention. Only nobody remembers Otto's heroic deed, as Benno was celebrated as a savior on his return. He got a statue and moved back into the lighthouse. Otto's concern that Frauke might have returned to him, too, dissolve into thin air: Instead of hers, the waitress Frieda Benno's great love is now.

The somewhat frustrated and irritated Otto finally got what he wanted: Frauke.

“Poor slapstick with old puns and stale jokes. Otto's third joke is nothing more than a gigantic advertising event for the main actor. "