Brauren made her first feature film in 1937. She played "Madame Homais" in Madame Bovary . The next film roles only followed during the Second World War , where she was seen in the films You belong to me (1943) and His time in my time (1944). After the end of the war an engagement at the Hamburger Kammerspiele followed , where Brauren belonged to the ensemble of the theater from 1945 to 1953. During this time she also made a few movies, but only appeared in supporting roles, such as in Toxi by director Robert Adolf Stemmle in 1952 . In the 1960s and 1970s Brauren was seen in numerous television productions. One of the highlights of her television career was the role of "Antoinette" in the television adaptation of Buddenbrooks (1979). 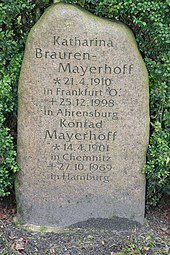 In 1980 she mimed a pensioner in a federal election campaign television commercial for the CDU , who went on about the politics of the social-liberal coalition , whereby her relative ignorance was exploited to create the appearance of authenticity. In the Aktenzeichen-XY episode of June 10, 1983, she played the grandmother of the murdered girl in the first film case. Brauren received the Federal Film Prize for her portrayal of the grandmother in the 1986 film November cats . In 1988 she played the mother of "Paul Winkelmann" in Loriot's Oedipussi ; in the second Loriot film Pappa ante portas (1991) she had a small role as a beggar. In 1992 Katharina Brauren was awarded the Adolf Grimme Silver Prize for her leading role in the television film Fremde, liebe Fremde . In the 20-part TV series Vera Wesskamp (1992-1993) with Maren Kroymann she played her mother.

In addition to acting, Katharina Brauren also worked as a radio play speaker on many productions of the Europa label , including Die drei ??? and the super parrot , The three ??? and the scarred face , The three ??? and the Carpathian Dog , The three ??? - Voices from nowhere , TKKG adventure in summer camp , The fatal encounter with the werewolf , Countess Dracula , Asterix and Maestria and Ben Hur . In addition, she lent a voice actress her voice, among others, Margaret Hamilton (Rosie!) , Jane Darwell (West of St. Louis) and Kathleen Harrison (Oliver Twist) .

Katharina Brauren was married to the actor Konrad Mayerhoff . Her grave is in the Protestant cemetery in Ahrensburg.