The design is a purposeful mental and creative effort, in preparation of a later to be developed therefrom concrete service or a tangible or intangible result. Designing is considered a key activity in architecture , landscape architecture , urban planning , design , engineering , IT and some areas of the fine arts , and plays a role in many aspects of human thought and action where creativity and planning are closely linked.

The design can remain a purely intellectual idea . This term also includes a representation and presentation in the form of texts , drawings , graphics , models and calculations. These are means of illustration for checking and communicating with other people by checking, discussing and, if necessary, improving the quality, functionality and functionality as well as possible errors in a design.

The verb design can already be found in Middle High German as a technical term in image knitting . It originally meant, make an image ': In weaving the weft thread was the clamped warp threads thrown to a particular motif design . Even today, the phrase “throwing a picture” in connection with a graphic representation is understood as a synonym for “(quick) sketching ”. Even in Middle High German there is a general extension of meaning to literary and intellectual design . For the drafting of drawings , however, the term crack (from Old High German scratch, tear for 'to draw, write', cf. Aufriss , Anriss, etc.) was used, which is still common in technical terminology today (e.g. pane crack ... Design for a glass painting, goldsmith's tear , master's tear, etc.). The aspect of provisionality and procedural nature that resonates with the term today was added later: through the influence of the French projeter , 'plan', literally ' reproach '. The noun draft for a (preliminary) sketch, a plan, originated in the 17th century. Today, the English-language terms are design and draft in some factual connections with design translated.

The noun design , already used by Goethe in the artist's song, first became common in the 20th century in architecture and later in the discourse of postmodernism and new media . Word formation, which is based on the nouncing of the verb design , is used to describe the process of designing something, and in this it also differs verbatim from the term design , which describes a result that has been designed. The word design has not yet been included in the Duden . 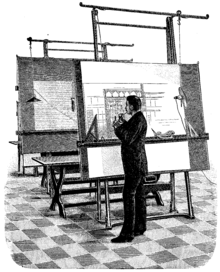 In the architectural designing a complex, rational and artistic process in which various boundary conditions ( location , building plot , space program , cost , construction law ... see also: Section Important issues of the lemma architecture ) must be observed to a building or buildings to develop . As a result, the design is, usually with the means of architectural representation in drawings , architectural models , computer simulations documented calculations and in text form.

The rules and procedures involved in this process are also known as the design strategy or design method . Depending on the strategy and the design tools used, there is a different degree of flexibility, variability, expandability and reducibility.

In addition to the rather vague term design , the more precisely fixed term design planning exists in Germany as part of the fee schedule for architects and engineers as service phase 3 .

In engineering , design is the process of conceiving and inventing functions, shapes, parts, and details of a system to achieve a particular function. Aesthetic, economic and scientific aspects play an important role.

In software development , a model is first designed for large systems, which represents the data and processes of the planned system. This model is then broken down into smaller parts and implemented. Aesthetic, economic and scientific aspects play an important role.