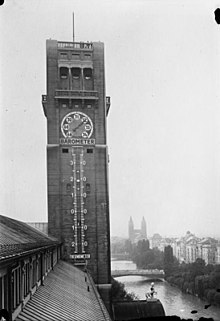 The largest thermometer in Germany on the tower of the Deutsches Museum in Munich, 1930

Each thermometer consists of a temperature sensor (in which the measuring effect occurs) and a display (e.g. using a scale ) or a connection point for an electrical signal .

Thermometers are adjusted using fixed temperature points, such as the triple or melting points of certain materials, or using a calibrated reference thermometer . 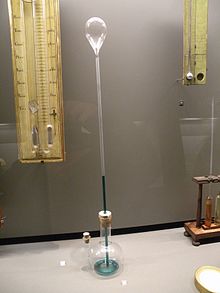 The development of the thermometer cannot be attributed to the invention of a single person. Rather, numerous scientific findings were necessary that led to our current concept of temperature and enabled the introduction of a temperature scale and its technical implementation.

The sensations “hot” and “cold” are directly linked to the sense of touch , which, however, hardly allows a reliable determination of different degrees of warmth. Greek philosophy dealt with the pair of opposites hot and cold in its considerations, but made no attempt at a numerical description. The Greek doctor Galen introduced eight “degrees of heat and cold” in the second century: four degrees each above and below a neutral center point, which should correspond to a mixture of equal amounts of ice water and boiling water.

Already in antiquity the thermal expansion of air caused by temperature changes was used to set various mechanisms in motion, for example by Philon of Byzantium or Heron of Alexandria . But it wasn't until the early 17th century that this principle was used in a forerunner of the thermometer, the thermoscope , to determine temperatures. It was a glass ball with a long, thin glass tube attached, the lower opening of which was immersed in water. The changes in the volume of the trapped air caused by changes in temperature caused the water column in the pipe to rise or fall. At least initially, the thermoscope did not have a scale; the length of the water column was measured with a pair of compasses.

From 1612 Giovanni Francesco Sagredo described in letters to Galileo Galilei how he made such instruments, the invention of which he attributed to Galileo, in various forms. He used it to observe the temperature of the cold winter air, kept records of a summer heat wave and compared the temperatures of lakes of different sizes. The doctor Santorio Santorio from Padua, who was in contact with Galileo, used his scientific knowledge medically and used both thermoscopes to measure temperature and pendulums to measure pulse. Santorio used snow and a candle flame as two reference points to calibrate the thermoscope.

All thermoscopes used up to then did not use the thermal expansion of the liquid, but that of the air. Basically they resembled a barometer and were therefore particularly dependent on the air pressure, as was known from Evangelista Torricelli at the latest in 1643/44 . Ferdinando II. De 'Medici , Grand Duke of Toscana, had the first thermometer manufactured in 1654, which exploited the expansion of alcohol in a closed glass tube.

From around 1714 Daniel Gabriel Fahrenheit in Amsterdam replaced alcohol with mercury and invented the mercury thermometer . 1724 beat Daniel Gabriel Fahrenheit named after him temperature scale before that the coldest point of a freezing mixture defined as 0 ° F, the melting point of water as 32 ° F and the human body temperature of 96 ° F. Anders Celsius determined his scale in 1742 based on the melting and boiling points of water, but the other way around than the scale that is named after him today.

In 1859 Gustav Robert Kirchhoff formulated the radiation law named after him , which laid the foundation for thermometers based on temperature radiation .

In a broader sense, thermometers also include maximum value indicators or Segers cones .

Heating thermostatic valves and thermostatic mixer taps with expansion elements , however, are not thermometers, but regulators . 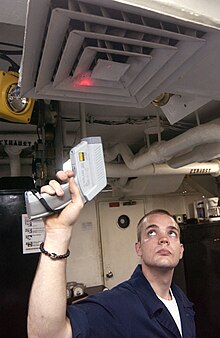 Non-contact thermometers ( pyrometers ) use the property that objects emit electromagnetic thermal radiation due to their own temperature . At below 500 ° C (until the onset of red heat ) it is in the range of infrared radiation . Infrared sensors are therefore required for non-contact temperature measurement in this area . In the past, pyrometers were divided into the following categories:

A further subdivision can be made based on the bandwidth of the evaluated radiation:

Later the radiation thermometers were also divided according to the measurement wavelengths:

Also thermography cameras are combined with an image-performing software suitable as a thermometer. It provides two-dimensional temperature profiles ( thermal images ) that are used in mechanical engineering, automation , R&D , medicine , security / monitoring technology and construction . The often used false color representation assigns a temperature to each color. A colored wedge with a temperature scale is often displayed in the image.

A thermometer based on gravity and temperature-dependent density of a liquid, the Galileo thermometer , was not invented by Galileo Galilei , but only named after him.

Raman thermometers, based on Raman spectroscopy (see also fiber optic temperature measurement ), use a frequency-stable measuring beam and evaluate its backscatter. You can measure spatially resolved along one dimension.

For the calibration of thermometers there is the international standard ITS-90 . Based on this standard, the Physikalisch-Technische Bundesanstalt (or the German Calibration Service or in Great Britain the UKAS - United Kingdom Accreditation Service ) calibrates platinum thermometers, which are then used as a reference for manufacturers. The following temperature points are used:

A measurement deviation of a thermometer is caused

Another source of error occurs with liquid glass thermometers : not only the thermometric liquid, but also the capillary expands with increasing temperature. Both must have assumed the same temperature as the measuring point. If the thermometer is operated under different conditions than during its adjustment, a thread correction is required. Furthermore, the frequently occurring parallax error should be avoided with liquid-glass thermometers . It is also important to ensure that the liquid may have dispersed in the capillary during storage and first has to be tied back into a thread by tapping or spinning.

With all temperature changes , the measured value follows the actual temperature with a delay because heat has to be transported to adjust the temperature. For the thermal contact of the thermometer with the object to be measured, consider

Characteristic for the time behavior are transition times in which the measured value follows a sudden change in temperature, namely 50% and 90%. The adjacent table gives excerpts from empirical values ​​from VDI / VDE 3511, sheet 2 (contact thermometer) .