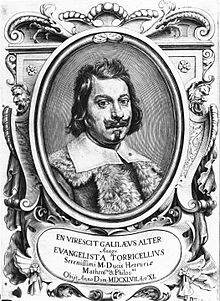 Evangelista Torricelli (born October 15, 1608 in Faenza , †  October 25, 1647 in Florence ) was an Italian physicist and mathematician . In 1640 he transferred the Galilean Laws of Fall to flowing fluids (" Torricellian Law of Outflow "), in 1642 he succeeded Galileo Galilei as court mathematician in Florence and contributed significantly to the development of calculus . Torricelli developed the mercury barometer in 1644 , at the upper end of which he created an artificial vacuum (" Torricellian void"). Torricelli's experiment rekindled the bitterly waged debate in 17th century Europe about a horror vacui and developed into the standard problem of natural philosophy of that time. In the decades that followed, plenists and vacuinists argued about the properties and nature of this Torricellian space.

Statue to Evangelista Torricelli in Faenza

Torricelli came from a poor family, studied mathematics and philosophy from 1624 (probably in his native town), later with Benedetto Castelli - temporarily as his secretary - in Rome mathematics, astronomy and mechanics. It seems that his work as a secretary (1626-1632) represented the remuneration for the lessons he received from Castelli.

In Rome he got to know the Dialogo , published in 1632, and other writings by Galileo Galilei , which impressed and influenced him. We know from a letter by Torricelli to Galileo that he believed the Copernican idea to be correct; In view of the trial brought against Galileo, however, he put astronomy on hold and devoted himself to physical and mathematical problems. From 1632 he worked as a secretary for Giovanni Ciampoli , a friend of Galileo's.

In the late autumn of 1641 - three months before Galileo's death - he went to Arcetri near Florence on the recommendation of Castelli , where he became Galileo's assistant and finally his successor as court mathematician of the Grand Duke of Tuscany and as professor of mathematics at the Florentine Academy. Until his death he lived as court mathematician in the ducal palace in Florence. From 1644 he also worked as a teacher for fortifications. He was not only a skilful experimenter, but also an excellent lens grinder, with which he earned a considerable amount of extra income in Florence. In 1642 he became a member of the Florentine Accademia della Crusca .

At the age of 39, Torricelli died of complications from an infection (presumably typhoid ).

Torricelli is one of the most important physicists and mathematicians of the Baroque period , whose sciences he significantly influenced with his contemporaries Galileo Galilei, René Descartes , Bonaventura Cavalieri , Pierre de Fermat and Blaise Pascal .

In 1644 he published his groundbreaking work on the laws of fall and throw ( De motu gravium naturaliter descendentium ). This was the second part of the three-volume work Opera geometrica in which his research on hydrodynamics was reflected and quickly aroused lively interest throughout Europe.

Particular attention was paid to the later so-called “Torricellian theorem”, which states that when a thin liquid flows out of a vessel, the flow rate is proportional to the square root of the height of the liquid. So it does not depend on the density of the liquid; therefore, for example, water and mercury flow out at the same rate at the same fill level.

In addition to these fundamental observations on the dynamics of fluids, Torricelli also made decisive preparatory work for calculus . Cavalieri, also a student of Castelli, had further developed Kepler's ideas about infinitesimal arithmetic quantities. He succeeded for the first time in determining the antiderivative of a function with a negative exponent. With the help of Indivisiblenmethode Torricelli discovered in the investigation of hyperbolic rotation body the existence of infinitely extended body with a finite volume. With the help of this method he found extremely elegant evidence for geometric problems - for example that the volume of a rotating hyperbola is finite (although its area is infinite, see Gabriels Horn ). Especially in his work De motu gravium ... he was able to successfully examine the parabolic movement of projectiles with the help of this method.

Torricelli developed a method with which the tangent direction of a curve could be determined as the direction of the instantaneous speed of a point moving along the curve. This method was later developed into the fluxion method by Isaac Barrow and Isaac Newton .

He improved Galileo's telescope and developed a simple but already powerful microscope .

He was also the first to manage to maintain a vacuum for long periods of time. His most important discovery related to the functional principle of the mercury barometer : He made the claim that the liquid is not drawn up by the vacuum, but is pushed up by the load of the column of air . This assumption was quite controversial. René Descartes wrote that vacuum could only be found in Torricelli's head. But it was supported by Blaise Pascal's experiment Emptiness in Emptiness in 1647 . The vacuum above the mercury column in the barometer is often referred to in older literature as the Torricellian void . Torricelli also correctly explained the formation of wind as a result of temperature and pressure differences in the atmosphere .

In addition, a genus is Torricellia DC. and the Torricelliaceae family of flowering plants from the order of the umbelliferae (Apiales) named after him.

In 1646 Torricelli received a letter from Gilles Personne de Roberval , in which he claimed to have taught the individual method ten years earlier and demonstrated it using the example of curves, especially the spiral. A priority dispute that could not be resolved clearly afterwards.