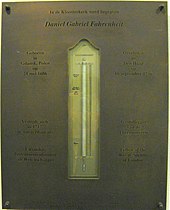 Memorial plaque in the Kloosterkerk (The Hague) where he was buried

Daniel Gabriel Fahrenheit (born May 24, 1686 in Danzig ; † September 16, 1736 in The Hague ) was a German physicist and inventor of measuring instruments. The temperature unit of degrees Fahrenheit (° F) was named after him.

His parents, who lived in Danzig , were Daniel (1656–1701) and Concordia Fahrenheit (1657–1701) (née Schumann, related Runge). The mother came from a well-known Gdansk merchant family and was the daughter of the wholesaler Michael Schumann (1624–1673). Daniel was the eldest of five children (two sons, three daughters) and was the only one who survived the first years of his life in Danziger Hundegasse (after 1945 Ulica Ogarna 95 ). His grandfather Reinhold Fahrenheit had moved from Kneiphof / Königsberg (Prussia) to Danzig and established himself as a merchant there. The family probably came from Hildesheim , but Daniel's great-grandfather had lived in Rostock before he moved to Königsberg.

His parents died early, presumably from eating poisonous mushrooms. After that, Fahrenheit was forced to take a commercial apprenticeship in Amsterdam . He then traveled extensively and settled in the Dutch city ​​of The Hague as a glassblower in 1717 , mainly working on the construction of barometers , altimeters and thermometers . In 1718 he gave lectures on chemistry in Amsterdam . On May 7, 1724 he was elected a Fellow of the Royal Society .

Fahrenheit developed precise thermometers with 3-point calibration ( Fahrenheit scale ) and thus established thermometry . At first he used alcohol as a thermometer substance , and from around 1714 also mercury . The idea occurred to him while reading a paper by Guillaume Amontons that described the change in the display of mercury barometers with temperature. He thus invented the mercury thermometer; this already existed before, but it was only through its calibration and its manufacturing processes that it became generally applicable. As zero point he used the lowest temperature which it with an ice-salt his scale cryogen could produce: -17.8  ° C .

In 1721 he discovered that water can be cooled well below its freezing point without freezing. One speaks of supercooled water.

Fahrenheit also constructed a hydrometer , pycnometer, and hypsobarometer . For a while the Fahrenheit scale was in use in Germany . In the United States , Fahrenheit is still used today.

His autographs are kept in the Gottfried Wilhelm Leibniz Library in Hanover , among others .