Fahrenheit is a unit of measurement of temperature . It was named after the German physicist Daniel Gabriel Fahrenheit . 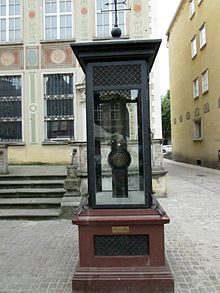 Fahrenheit developed his temperature scale after visiting the Danish astronomer Ole Rømer in Copenhagen . Rømer was the first to develop a thermometer that was calibrated using two fixed points . On the Rømer scale , the freezing point of water is around 7.5 ° Rø, the boiling point is 60 ° Rø and the average body temperature of a person is around 26.9 ° Rø.

In contrast, Fahrenheit used the lowest temperature that he could generate with a mixture of ice, water and ammonium chloride (= ammonium chloride ) or sea ​​salt ( cold mixture ) as the zero point of his scale : −17.8 ° C which corresponds to 0 ° F. In doing so, he wanted to avoid negative values ​​on his scale, as they occur on the Rømer scale at temperatures below −14.3 ° C.

As the second and third fixed points, Fahrenheit 1714 set the freezing point of pure water ( ice point ) at 32 ° F and the body temperature of a "healthy person" at 96 ° F. However, 96 ° F is around 35.6 ° C; This value is below the normal human temperature range compared to the measurement methods commonly used today.

The disadvantage of this scale was that with the improved accuracy of measurements in the 19th century, in particular the lower and upper fixed points could not be reproduced with sufficient accuracy. It was therefore necessary to redefine the scale. To define a temperature scale, on the one hand, you only need two different temperatures that are reproducible as precisely as possible, and on the other hand you need to arbitrarily define the division of the temperature difference into scale divisions and a zero point.

Since the 1860s, and legally introduced in the United States with the Mendenhall Order of 1893, attempts have been made to link the customary units of the Anglo-American measurement system to the definitions of the international metric system . Since that time the Fahrenheit scale was defined by the scale of the hundred-part thermometer and thus had the freezing point (equal to 32 ° F) and the boiling point of water (equal to 212 ° F) as fixed points. Since 1948, when the hundred-part thermometer was renamed and redefined in the Celsius scale , the Fahrenheit scale has been indirectly defined by the Kelvin scale.

The Fahrenheit scale was also widespread in Europe in the 18th and early 19th centuries (along with other, now completely unusual, scales); It was only with the establishment of the metric system in the middle of the 19th century that the Celsius scale became established in continental Europe . In the UK, the Fahrenheit scale remained in use for longer. There it was also used to define certain other imperial units of measurement ; For example, in the Weights and Measures Act of 1855, the yard was defined using a standard yard made of bronze and gold at a temperature of 62 ° F. Copies of this standard yard that showed slight deviations due to the manufacturing process were calibrated by specifying slightly different temperatures (between 61.94 and 62.16 ° F).

The official introduction of the metric system (metrication) was discussed in Great Britain as early as 1818 and actively promoted between 1965 and 1980, but then abandoned. The introduction was only implemented with membership in the European Economic Community from 1995. In unofficial publications, especially weather forecasts, the Fahrenheit scale was used in Great Britain after 1995, albeit with a downward trend.

The Fahrenheit scale is only officially used in the USA and its suburbs , in Belize, as well as in the Bahamas and the Cayman Islands .

Comparison with other scales

Temperatures in degrees Fahrenheit can be converted exactly using a numerical equation as follows:

The fixed points with which the scales were originally defined are highlighted in color and converted exactly into the other scales. Today they have lost their role as fixed points and are only approximate. Only the absolute zero point still has exactly the specified values.

On the 300th anniversary of the introduction of the Fahrenheit scale was the German Post AG one on November 3, 2014 special stamp worth 60 euro cents out, designed by the graphic artists Thomas and Martin Poschauko.