The title of this article is ambiguous. Further meanings are listed under Yard (disambiguation) . 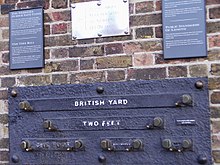 Etalon for measuring lengths on the wall of the Royal Observatory in Greenwich , London

The yard is a unit of length in many English-speaking countries (see Anglo-American system of measurement ), which is officially approved there in addition to the length units of the metric international system of units . It is 3 feet , which is 36 inches, or a little over 0.9 meters .

The English word originally meant whip (to which it is related in linguistic history), twig, stick, stick .

In Anglo-Saxon England (and partly locally in the 19th century, =  land yard ) the yard had a length of 16½ feet or 5½ today's yard, making it identical to the rod . In the 13th century, however, the Elle (English ell, Latin ulna ) was 45 inches standard, until it was in 1353 under Edward III. was legally superseded by the verge or today's yard of 3 feet or 36 inches.

Further definitions of the yard followed, so from 1558 to 1824 the "Queen Elizabeth's Yard", which was declared part of the "Imperial Standards" in 1758, and the Birds standard measure of 1760. With the Weights and Measures Act of 1824 (5th ° George IV. Cap. 74), the yard was also physically defined as the distance between the centers of the middle lines on the gold bolts in a bronze rod at 62 degrees Fahrenheit , which is kept in the Board of Trade at Westminster:

"From and after the First Day of May One thousand eight hundred and twenty five the Straight Line or Distance between the Centers of the Two Points in the Gold Studs of the Straight Brass Rod now in the Custody of the Clerk of the House of Commons whereon the Words and Figures "Standard Yard 1760" are engraved shall be and the same is hereby declared to be the original and genuine Standard of that Measure of Length or lineal Extension called a Yard; and that the same Straight Line or Distance between the Centers of the said Two Points in the said Gold Studs in the said Brass Rod the Brass being at the Temperature of Sixty two Degrees by Fahrenheit's Thermometer shall be and is hereby denominated the Imperial Standard Yard and shall be and is hereby declared to be the Unit or only Standard Measure of Extension, wherefrom or whereby all other Measures of Extension whatsoever, whether the same be lineal, superficial or solid, shall be derived, computed and ascertained; and that all Measures of Length shall be taken in Parts or Multiples, or certain Proportions of the said Standard Yard; and that One third Part of the said Standard Yard shall be a Foot, and the Twelfth Part of such Foot shall be an Inch; and that the Pole or Perch in Length shall contain Five such Yards and a Half, the Furlong Two hundred and twenty such Yards, and the Mile One thousand seven hundred and sixty such Yards. "

Other definitions were also used locally. In the 19th century, in the presidency of Madras , an administrative unit of British India , a yard was divided as follows:

In 1856 the United States received two copies of the British Standard Yard.

The yard has been derived from the meter since the end of the 19th century: the English yard was set at 914.3993 mm, the American yard at 914.4019 mm. Since 1956, the yard has been uniformly defined internationally with a length of exactly 0.9144 meters. However, there are further specifications , and rounded values ​​apply for applications with less precision (see below).

In Great Britain, but not in the United States (where the foot is used for this), the yard is the usual unit for medium distances - even after the introduction of the metric system. In aviation, however, the information for flight altitudes is mostly in feet. In the Anglo-Saxon region in general, the yard is still used today, especially in geodesy .

In athletics up to the end of the 1970s, yard courses were also common in addition to the meter courses. B. 100-yard (91.44 m) run or 4 x 110-yard relay run. The yard also plays a major role in American football , where the playing field is divided into twelve ten yard sections. All run and pass statistics are reported in yards. The yard was originally used to divide soccer fields .