An altimeter or altimeter ( Latin. Altus 'high' and ancient Greek. Μέτρον métron ' measure , measure') is a device with which the height of an object is measured above a defined plane or reference surface . 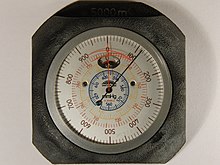 Altimeter z. B. for mountain climbing

A barometric altitude measurement is carried out using the air pressure prevailing at the measurement location . The air pressure does not only depend on the altitude, therefore, depending on the application, different measures are taken to compensate for the influence of the other parameters.

The analog altimeters used are aneroid barometers , which show the altitude above sea ​​level instead of the air pressure . Usually the pointer makes one revolution per 1000 m; the km value appears in a small window (usual measuring range 5 or 8 km). Accuracy is 2-20 meters if the correct starting altitude or the pressure is set to sea level.

Digital altimeters also show altitude differences, maximum values ​​or the passage of time at different altitudes. A calibrated and temperature compensated pressure sensor is used for an accurate digital altimeter. Usually these sensors offer a suitable data interface. The accuracy of good barometric sensors is less than 1 m (at sea level).

The conversion of air pressure to altitude is usually based on the standard atmosphere , in which at sea level there is a temperature of 15 ° C and a pressure of 1013.25 hPa and the temperature decreases by 6.5 ° C per km with altitude. The value calculated mechanically or electronically from the air pressure can be corrected by the user through a setting so that the displayed altitude corresponds to reality. To do this, the altimeter is set to the correct height at the beginning of a tour. This can be done manually with the help of a known altitude from a map or from a sign, or automatically with the help of GPS .

With stable weather conditions and height differences of up to a few hundred meters, you can achieve very precise measurements. If the air pressure changes significantly during the tour, you will get a clear measurement error. A decrease in air pressure by 1  hPa already leads to an apparent "rise" of 8 m.

If you cover greater height differences, a further measurement deviation becomes visible if the density of the air differs significantly from the assumed norm. This is especially the case if the temperature is significantly higher or lower than the assumed 15 ° C. For example, if the temperature at sea level is 30 ° C, the altimeter shows too little for every 1000 m ascent 50 m. This error disappears when you descend and you have a correct display again when you reach the original height.

Some devices have the option of continuously comparing and correcting the barometric altitude measurement with a GPS signal. A GPS altitude determination often shows strong short-term errors when trees or rocks impair reception. If you are on the move for a few minutes, the mean value for high-quality receivers is very accurate. In the case of a device with cellular reception, it is also possible to query the air pressure, temperature and altitude of the nearest airport. This also allows the errors mentioned to be corrected.

An altimeter for skydivers with a 4000 m scale.

An analog parachute jump altimeter is an airtight metal can, similar to a barometer, which more or less contracts or separates depending on the ambient air pressure. This deformation is transferred to a pointer via a mechanical lever mechanism, which shows the corresponding height on a scale. It does not show the absolute height above sea level, but only the air pressure of the environment. When the air pressure fluctuates, a change in the altitude reading of a barometric altimeter can be observed.

The altimeter is used by the skydiver on the back of the hand or on a chest pillow. The altimeter usually has a scale from 0 m to 4,000 or 6,000 m or a corresponding scale indication in feet . Before starting, the altimeter is set to 0 m height. If you want to land on a different place than the one on which you take off, the difference height of the intended landing place is set. The skydiver uses the altimeter to decide when to open the parachute (opening height).

Very often parachutists also have an automatic opening device on their harness. This measures the height electronically and calculates the speed of fall. If this registers that the jumper has too high a speed below a defined height, the computer assumes an emergency situation and initiates the opening of the reserve parachute .

An additional acoustic altitude warning is a supplement to the optical altimeter, which emits different warning tones at defined heights.

Instruments as above, but more precise. By calibrating using temperature or pressure gradients, accuracies of up to a few decimeters are possible, and even 10–20 cm when the weather is stable. Digital altimeters are becoming more common for both areas of application. Depending on the program menu, they also show height differences, maximum values ​​or the temporal course of height profiles.

In geodesy , the barometric height measurement is used for quick, approximate measurements of the terrain , for example for the first project fundamentals or for rough valley profiles . However, their importance has decreased since the 1990s due to satellite methods ( GNSS ) and more precise digital elevation models.

Compared to the tens of meters in the navigation, the accuracy can be increased noticeably. The instrument is calibrated using the prevailing air temperature or, better still, the computational atmosphere model using temperature and the current air pressure gradient is used . This means that accuracies of up to a few decimeters can be achieved.

Barometric altitude measurement in aviation is principally carried out with altimeters as described above, but these have a measuring range of up to 50,000 ft (15 km) and scales mostly in feet instead of meters (1 ft = 0.3048 m). By setting the QNH (pressure at sea level) you get absolute heights, with QFE (pressure at ground level) the height above the airfield . Aircraft also have a variometer to display changes in altitude (barometric flight altitude ), while airliners also have a radar altimeter .

This aviation altimeter shows an altitude of 14,500 feet. The reference air pressure is shown on the small scale on the right (here 29.48 inHg) and is set with the rotary knob at the bottom left.

All aircraft measure their altitude based on the external air pressure, i.e. barometrically. The display scale is usually calibrated in feet . Only in Russia , France, in gliders and some microlights , the height is given in meters.

In order to display the flight altitude precisely, each pilot must set his altimeter to the current meteorological air pressure before take-off. Either he adjusts the altimeter so that it shows the (known) altitude of the airfield, or he asks the flight management for the current reference air pressure. The radio abbreviation for this is QNH . An altimeter set to QNH shows the height above sea level (MSL, mean sea level ). Divergences result from a temperature deviating from the ISA . Unusually low temperatures lead to a higher air density, which is why the engines are more efficient. At unusually high temperatures, on the other hand, the aircraft needs power reserves. Aircraft then have to load less cargo or fuel to safely take off on the same runway length. The so-called density height is not used for navigation, but for estimating the power reserves.

Above the transition altitude, all barometric altimeters must be set to normal pressure , i.e. 1013.25 hPa or 29.92 inHg. The flight heights measured in this way no longer represent absolute heights, but relative heights above the calculated normal pressure area. They are called flight areas . Example: An aircraft flies at flight level 120 if its altimeter is set to the reference pressure 1013.25 hPa and with this setting indicates an altitude of 12,000 feet. This ensures that all aircraft - regardless of the air pressure at their departure airport - have the same reference air pressure as each other. When cruising, it is primarily a collision with other aircraft that must be prevented, and not a collision with the ground.

In addition to the barometric altimeters, most aircraft have variometers for displaying the rate of climb or descent.

Airplanes that have to land in poor visibility conditions may only do so using the instrument landing procedure . For ILS category I, a barometric altimeter is required, among other things. The pilot must abort the landing if he cannot see the runway at the decision height. This decision altitude is given as altitude above sea ​​level . For landings in very poor visibility conditions, certain airports and aircraft are equipped with ILS categories II and III. A radar altimeter , including a radio altimeter, is required for categories II and III . This sends a radar signal in the direction of the ground and the height above the ground is calculated from the time delay with which this signal arrives again at the aircraft . That is why ILS categories II and III are also referred to as decision height instead of decision altitude . Here, too, the landing approach must be aborted if the runway is not in sight when the minimum altitude is reached.

The so-called safety altitude (minimum sector altitude) does not apply to landing approaches, but to cruising flight. It is indicated on air traffic maps and aerodrome approach charts for the respective area and is calculated as follows: height of the highest elevation plus 1000 feet, rounded up to the nearest 100 feet.

By comparing pressure and radio altimeters you can locate high and low pressure areas and calculate the drift caused by cross winds ( meteorological navigation ).

On the MIG 21 military aircraft , the altimeter is in the immediate field of vision of the pilot, to the left of the "T - Zone". This viewing zone was named after the letter T. The most important display instruments were arranged in this form.

Physical background of the barometric method

In the case of infinitesimal differences in altitude, the air pressure p changes according to

where are density and gravity acceleration.

If one considers the air as an ideal gas and takes the law of Boyle-Mariotte as a basis, the relationship between density and pressure results

where and refer to a reference altitude (e.g. sea level).

The following differential equation is obtained:

With the initial condition , solving the differential equation results in the barometric altitude formula :

The altitude that can be assigned to a pressure can thus be calculated, which is the basis of the barometric altitude measurement :

It should be noted, however, that the barometric altitude formula must not be used over large altitude differences, as otherwise two basic assumptions of the derivation no longer apply:

In addition to the barometric method, heights can also be determined by triangulation using a reference point, by radar (only above ground ) or by GPS.