The title of this article is ambiguous. The variable inductances known as variometers are described under coil (electrical engineering) . See also variometer (disambiguation)

A variometer or altimeter - short term Vario , ( English vertical velocity indicator (VVI) , also vertical speed indicator (VSI) ) shows the vertical speed of an aircraft . The rates of climb and descent are either in feet per minute (ft / min) (in regulated air traffic according to ICAO rules) or in meters per second (m / s) (in gliders , hang-gliders , paragliders and balloons , or in some air traffic Successor states of the Soviet Union ). The measuring device evaluates the rate of change of the altitude-dependent air pressure . 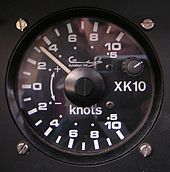 In the earth's atmosphere , the air pressure changes depending on the sea ​​level . This relationship is described by the barometric height formula . When an airplane rises or falls, the pressure of the surrounding air changes. The rate of change is measured and displayed by a variometer. From a mathematical point of view , the variometer differentiates altitude according to time by differentiating the pressure value. This is achieved mechanically, for example, in that a pressure cell for the external pressure works in a housing, which experiences a delayed pressure equalization to the external pressure by means of a small opening (throttle).

Mechanical variometers are part of the basic equipment of aircraft. These are reliable and robust devices that work safely even without electricity. With mechanical variometers, the air pressure ( static pressure ) acts on one side of the mechanics. The change in pressure is measured by connecting an "equalizing tank" on the other side.

During the descent, there is a negative pressure in the expansion tank due to the delayed pressure equalization via the capillary compared to the chamber above the membrane, which leads to a "sinking" indicator ( ).

The change in air pressure, and thus the difference between the static pressure and the pressure in the expansion tank, is a measure of the vertical speed.

Common designs are shown in the scheme doses variometer (diaphragm unit) as a robust, but inert instrument with large measuring range (up to ± 10 m / s and more) and the baffle plate variometer as a fast measuring device for low climb and descent rates. 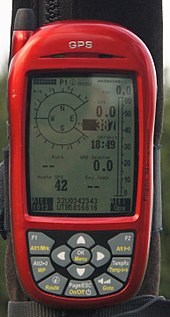 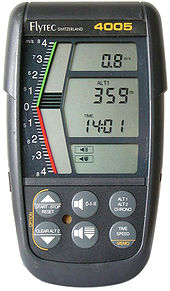 In the case of electronic variometers, there are those that work in a similar way to mechanical variometers. Here, too, the pressure change, which is relative to the vertical speed, is measured by means of a compensating vessel via a capillary. The measurement takes place via the amount and speed of the compensating air flow by means of electronic components (e.g. heated temperature sensors). With the first electronic variometers in the 1970s, there were no alternatives to this method.

With modern variometers, the air pressure is measured by means of a pressure sensor (electronic altimeter ) and the signal is differentiated either analog or digital . This process requires high quality sensors and evaluation electronics. The measuring signal is displayed with the help of pointers , with an LCD and / or also acoustically.

Modern instruments for hot air balloons work on the same principle. In addition to the vertical speed, the height is displayed, the temperature of the shell is transmitted and displayed by radio. Advanced instruments have GPS and show the course, the ground speed and the coordinates of the position.

The variometer is used in powered aircraft to maintain a certain rate of climb or descent (often specified by air traffic control ). In cruise flight also it serves as a very quick indication of whether the flight altitude is kept constant.

In gliding the vario fulfills a completely different function: It is the central tool to updrafts track and efficiently exploit or unwanted downdrafts indicate that they quickly can be flown. A glider pilot is therefore interested in the vertical movements of the ambient air, he is not interested in the exact rate of climb or descent in the sense of powered flight.

An uncompensated variometer simply shows the vertical speed of the aircraft. But when a glider changes its speed , it gains or loses altitude. Gliders with their relatively low flow resistance can convert speed to altitude and vice versa with little energy loss. Depending on the surrounding vertical air movement, a glider constantly changes its speed (slowly increasing and quickly decreasing air mass in order to minimize the sinking; see speed-to-fly theory ). This in turn leads to a permanent conversion of positional to kinetic energy and vice versa. Thus, with a conventional variometer, rising or falling, the so-called “stick thermal”, is displayed. This display behavior is undesirable because the glider pilot only wants to see the vertical air movement (i.e. the total energy of the glider, the sum of kinetic and potential energy ). Changes in altitude due to changes in speed should be compensated by the variometer. The variometer type is called "TEK-Vario" (TotalEnergieKompensiert). Also TEVAR = total energy variometer

This is achieved using special pressure reduction nozzles (“compensation nozzles”). These nozzles measure a "nozzle pressure" that is exactly the same as the difference between static pressure and dynamic pressure :

In order to measure the desired value on the measuring probe of the compensation nozzle, there must always be a negative pressure that is exactly the same as the dynamic pressure. The pressure coefficient at this point is therefore as possible . To measure this suction there are various nozzle shapes that work more or less well during flight. The most common is a tube that is almost vertical upwards (angle to the direction of flow about 70 °) with a diameter of 8 mm and several slits on the back.