Airspeed indicator in a cockpit

Advertisement on the PFD of a modern airliner. The airspeed is displayed in knots on the left strip, with the Mach number below it.

The airspeed is the speed of an aircraft .

When measuring and specifying an airspeed (see airspeed indicator ), two important reference systems must be distinguished:

Speed ​​relative to the air (travel, airspeed)
The air flow on control surfaces and wings is created by the speed of an aircraft relative to the air . It therefore decides on the aerodynamic behavior of the aircraft (lift generation and maneuverability). It is measured on the outside of the aircraft and displayed on the airspeed indicator in the cockpit. The airspeed is the aerodynamically important speed. Your measurement is subject to some interfering influences, depending on the degree of correction, a distinction is made between several "types" of Airspeed.
Speed ​​relative to the ground (groundspeed)
The speed of an aircraft relative to the ground determines when individual waypoints of the flight route and ultimately the flight destination are reached. It differs from the Airspeed mainly in the influence of the wind. It can be calculated from the Airspeed or determined using a navigation system. The ground speed is the most important navigational speed. It can be considerably higher in a strong tailwind and considerably lower than the Airspeed in a strong headwind. 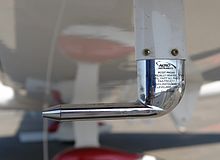 Pitot tube on the underside of the wing of a small aircraft, the left end in the picture is flown against in flight

In principle, the measurement with the pitot tube is dependent on the (upwardly decreasing) air density to the same extent as the lift on the wings, so that the influence of the air density is automatically taken into account. The measurement method thus offers a good basis for assessing flight performance.

In the early days of aviation, attempts were made to use an impeller to measure the speed of slow aircraft .

The measurement through the pitot tube still contains a number of interfering influences. Therefore, several levels of correction are made. Some of these disruptive influences only become noticeable at high speeds or at great altitudes, and can therefore be neglected in hobby flying, but are important for commercial aviation.

The intermediate results of the respective correction levels each have their own designation:

The Uncorrected airspeed (also equipment speed or Indicated airspeed ;. Engl indicated airspeed , IAS ) is the speed of an aircraft relative to the surrounding air mass, which would result directly from the measured pressure difference.

The IAS is only relevant for small aircraft, as the CAS is displayed directly for larger aircraft.

The IAS is proportional to the square root of the quotient of dynamic pressure (total pressure minus static pressure) and air density . At high altitude, the IAS is smaller relative to air at the same speed. Since all air forces acting on the aircraft ( lift and drag ) are also dependent on the air density, the characteristic speeds ( stall speed V 0 , maneuver speed V A ) have constant IAS values, regardless of flight altitude and air pressure . The maximum permissible speed V NE, on the other hand, decreases with altitude, since it is mostly caused by the flutter , which increases with decreasing damping by the air.

(Engl. When airspeed calibrated airspeed , CAS ) are the so-called static error corrected, but not the dynamic error .

The displacement of air through the aircraft fuselage creates a pressure wave, similar to the bow wave of a ship. This pressure wave leads to a falsification of the measurement result, which depends on the aircraft type and the installation location of the pitot tube. One speaks here of the instrument and installation error ( static source error ).

If the measuring scale has not been calibrated for the specific aircraft type, the displayed value is corrected using a table or a calculation formula specified in the technical manual for an aircraft type. In the case of small aircraft and their low speeds, the error usually remains so insignificant that it can be neglected.

Another Pitot tube measurement error increases significantly with increasing speed: the compression of the air.
Because the air in front of the pitot tube is compressed, the pitot tube sees a higher air density than it actually is. Since the error initially only increases slowly with the speed, the information on the speed at which the error must be taken into account varies considerably, in the range from 100 to over 250 knots.

This correction plays a rather minor role for take-off and landing, since the speeds are lower.

At medium to higher speeds, however, this speed is of essential importance, since the air forces on the aircraft depend on it (important for flight stability ). One could say: EAS is the speed that the aircraft “feels”.

However, if the speed approaches the speed of sound, the Mach number comes to the fore instead. (see section below)

For small aircraft, the EAS still agrees to a sufficient approximation with CAS or even IAS due to the low speeds and altitudes and does not have to be determined separately.

The true airspeed (engl. True airspeed , TAS ) is the actual speed of the aircraft relative to the surrounding air. In the standard atmosphere at sea level and below 100 knots, TAS and IAS are almost the same. If the air density decreases (with increasing flight altitude or temperature) or the speed increases (increasing compression), the IAS is lower than the TAS .

The TAS is calculated from the EAS by including the air density in the calculation. It can be estimated from air pressure and temperature and tells you how much "attack mass" is available to a wing and how much mass flows against the sensors in the pitot system. The density of the air must not be confused with its pressure : warmer air has a lower density than colder air at the same pressure.

For commercial aircraft that cover a large area of ​​different air densities and speeds from the runway to the summit, this correction is very complex to calculate, since it must also be taken into account that the compression of the air also warms it up. The measured temperatures must be corrected accordingly.

In practice, the TAS is calculated from the CAS, so that two calculation steps are combined (CAS → EAS → TAS). The calculation is quite complex for high speeds. If the TAS is not calculated using a computer-aided display, it can be carried out in an iterative calculation using a flight calculator (slide rule similar to a slide rule, with additional auxiliary scales and tables).

For small aircraft and their area of ​​application, in turn, simplified formulas can be used or simplified display instruments can be used in which, for example, the TAS is determined by turning the scale ring and thereby bringing the so-called pressure altitude to coincide with the outside temperature (see figure of an airspeed indicator at the top). In contrast, such instruments would be completely unsuitable for high altitudes and high speeds.

For pilots of small aircraft following applies to a first approximation rule of thumb :

In principle, the following dependency applies:

However, this formula only helps to a limited extent in practice, since the air density cannot be measured directly, but has to be estimated from the air pressure and temperature.

The Mach number is the ratio of the TAS to the speed of sound at the current air temperature.

Speed ​​relative to the ground (groundspeed)

The ground speed (Engl. Groundspeed , GS ) refers to the order the wind influence (ie the movement of the air mass through which the air itself) corrected True airspeed . It represents the speed of an aircraft relative to the earth's surface. Knowledge of the ground speed is important for flight planning. Only it says when individual waypoints or the flight destination will be reached. Especially with a headwind or tailwind, the ground speed can differ considerably from the airspeed displayed in the cockpit; with a tailwind, the ground speed is the sum of the air speed and wind speed. Therefore, jet streams in the direction of flow are used to shorten the flight time.

Under special circumstances, a too low ground speed combined with a display in the cockpit that is too high can lead to accidents such as the Star Dust crashing over the Andes .

The ground speed can be calculated by taking the wind into account using a wind triangle based on the reports from the aviation weather station, but nowadays it is also measured using modern on-board systems (e.g. inertial navigation system , Doppler effect , air navigation radio service ).

Navigation methods such as GPS can also be used as a support . However, navigation using GPS alone is not permitted in civil aviation, as it is operated under military responsibility and control and is not operated by any recognized civil aviation organization. It is also prone to failure when there is increased solar activity . Because of its ease of use and availability, however, it plays an important complementary role in non-commercial aviation.

In aviation, all flight speeds are usually given in knots (1 knot = 1 kn = 1.852 km / h). Exceptions are Russia and the countries of the CIS . In contrast to the international standard, the airspeed in gliders and ultralight aircraft in Germany is measured in km / h.

In international civil aviation, a K (for knots) is often combined as a unit with the type of speed (IAS / TAS): KIAS ( knots indicated airspeed ) or KTAS ( knots true airspeed ).

For greater altitudes and speeds, the Mach number (the ratio to the speed of sound) is of additional use.

The different speeds are compared in the table below. Note how, despite a decreasing IAS, the ground speed ultimately increases with increasing altitude.

The following approximation formula applies to the flight speed in level flight :