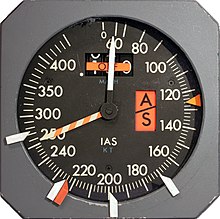 Combined airspeed indicator and mach meter from a large jet aircraft. At the edge of the scale frame you can see the movable speed bugs with which variable speed ranges can be marked.

As airspeed (engl. Airspeed indicator; ASI ) are in the aviation instruments to measure the velocity of the aircraft relative to the surrounding air (travel, engl. Air speed hereinafter). The flight of the aircraft is also referred to as the airspeed .

The barometric airspeed indicator is the standard design today. The instrument consists of a pressure-tight housing to which the static pressure is connected. Inside the housing there is a barometer box (membrane box ) to which the total pressure from static and dynamic pressure is applied.

The difference between the total pressure and the static pressure corresponds to the speed-dependent dynamic pressure according to the Bernoulli equation . This pressure difference is displayed on a scale as speed.

For gliders and ultralight aircraft, the speed is usually displayed in km / h, but for most aircraft in knots , for some smaller training and travel aircraft, mostly from American manufacturers, also in miles per hour . Airspeed indicators with multiple scales are also available.

The scale of the airspeed indicator for single-engine aircraft has colored arcs to mark individual speed ranges:

The arches serve as a reminder, the exact speeds, procedures and operating limits can be found in the flight manual of the respective aircraft. There you can find information about flight performance depending on weight, center of gravity and altitude .

Commercial aircraft often have so-called speed bugs, which (equivalent to a reminder) when preparing to land for z. B. the V REF and / or V TGT are pushed.

There are other speed ranges for many aircraft, which, however, are not of permanent maximum interest, behave variably with the flight weight or simply have to be learned by heart by the pilot (and therefore not shown as a colored area on the airspeed indicator). These are z. B .:

(for translations and further explanations of the abbreviations see: Abbreviations / Aviation )

If a Mach knife is used instead of a speedometer, the V against M is replaced (if it makes sense) in the abbreviations given above - this means, for example: M NO etc.

There are other speed ranges for aircraft that can be of interest in certain situations and are often also recorded in the relevant POH (flight manual). However, they also do not appear as markings on the airspeed indicator and do not have their own fixed abbreviation in the style of V REF , V MU etc.

Gliders have a yellow triangle in addition to the markings that are also present on the single engines (see above). This describes the approach speed recommended by the manufacturer at maximum weight without water ballast in calm conditions.

Motor gliders usually still have a blue line at the speed of the best climb (V Y ).

Technology of the airspeed indicator and pressure decrease

In many types of aircraft, the static pressure is taken from openings ( static ports ) about 1 mm in size on both sides of the fuselage and routed to the instruments via hose lines. The two-sided arrangement of the pressure consumers should false indications, z. B. reduce by pushing flight conditions and problems caused by a clogged pressure sensor. In addition to the airspeed indicator, altimeters and variometers are also connected to the static pressure system .

The total pressure is in the process described here airspeed indicator on the Pitot tube (Engl. Pitot tube ) is removed and also routed via tubing to the instruments. In most aircraft, the pitot tube is located at the tip of the fuselage or near the leading edge of the wing and protrudes into a largely undisturbed air flow. The pitot tube can be equipped with a heater (pitot heat, usually electric) to protect it from icing.

Since there are airplanes these days that have a black box, the speed of the airspeed indicator must be recorded electronically. One possibility is signaling by means of a variable capacitor that is integrated in the instrument.

The pitot tube is often covered with a protective cover when the aircraft is parked (e.g. to prevent clogging by insects). The static pressure transducers are less likely to receive protection than the pitot tube. During the pre-flight inspection , it must be checked, among other things, that the protective covers have been removed and that the pressure tapping points are in perfect condition (no clogging, etc.).

It is common to use Prandtl tubes with which the dynamic pressure and the static pressure can be taken off at the same time. From the outside, these can only be distinguished from the normal pitot tube on closer inspection.

Many types of commercial aircraft have several pressure tapping points (for both static and total pressure), often separate for the captain and co-pilot, and more rarely with the option to switch (e.g. in the event of malfunctions). During the take-off run, check that the displayed speed increases continuously. In the case of crews of commercial aircraft, both the captain and the co-pilot should confirm the passage of the 80-knot display in their airspeed indicator with the exclamation eighty (German: eighty ). If this announcement does not occur at the same time or if there are other indications of a wrong display, the procedure for aborting the start must be carried out immediately.

Airspeed indicators are partially equipped with electrical signal transmitters, via which, for example, the autopilot or transponder can be supplied with information about the speed, provided that they do not have their own pressure connections or evaluation instruments. Some aircraft types have a switch for the autopilot to select the signal source to be used. Glass cockpits (EFIS) can also be supplied with the speed signal. In this case, an analog instrument is still available as a backup.

For slow aircraft, venturi tubes are occasionally used for pressure extraction instead of the pitot tube . These deliver a negative pressure instead of an overpressure like with a Pitot tube. The pressure difference per speed difference can be influenced within wide limits by the shape of the venturi tube, common is a three times better sensitivity compared to pitot tubes.

"Speedometer" means in English, although the speedometer is in the automotive sector but usually technically considered a tachometer.