The air density  ρ (also density of air or density of air ) indicates the mass of air contained in a certain volume . At sea ​​level , the air, at around 1.2041  kg / m³ at 20  ° C, is more compressed by the air mass above than at higher altitudes: The air is therefore relatively denser. 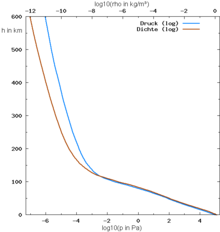 Average air density and air pressure
depending on the altitude

The air on the ground always has the highest density and the highest air pressure and - except for inversions - also the highest temperature; at higher altitudes the air becomes thinner and thinner.

If the temperature were the same at all altitudes, the air pressure and air density would also decrease together with increasing altitude according to the gas law (see barometric altitude formula ). However, the temperature at different altitudes varies greatly.

It is not exactly true that the pressure and density of the air should theoretically decrease by half for every 5000 meters:

If air is considered the ideal gas , the air density ρ in kg / m³ is calculated  as:

By inserting the specific gas constant for dry air one obtains: 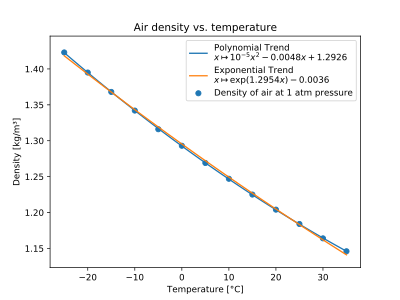 An exact determination of the density of the air requires the air humidity to be taken into account , as this changes the gas constant of the air:

After adjusting the gas constant, the equation

The reciprocal value of the density, the specific volume , has the symbol  α in meteorology and the symbol  v air in thermodynamics :