Tidal forces occur when an extended body is in an external gravitational field , the strength of which varies spatially. The tidal forces detectable on earth are caused by the moon and sun and cause (among other things) the tides .

Tidal accelerations are relatively small compared to the acceleration experienced by the extended body as a whole from the external gravitational field. Tidal forces are especially noticeable when the system is not subject to any other external forces, e.g. B. moves freely in orbit or, more generally speaking, is in free fall .

The tidal forces cause large bodies or systems to deform. Examples of the effect of tidal forces are, in addition to the tides, the slowing down of the Earth's rotation , the bound rotation of the Earth's moon, the volcanism of Jupiter's moon Io and the tearing apart of comets (see e.g. Shoemaker-Levy 9 ) or galaxies when they almost collide (see e.g. antenna galaxies ).

The prototype for an inhomogeneous gravitational field is the central field that is generated by a distant body. An extended body that falls freely in it is stretched parallel to the direction of fall (horizontally in the picture) and compressed perpendicularly to it. The simplest test specimen for exploring tidal acceleration is a dumbbell in the shape of two rigidly connected point masses. The dumbbell comes under tension (its masses diverge) when it is oriented radially, i.e. parallel to the acceleration due to gravity. In contrast, it comes under a compressive stress of half the size of this tensile stress when it is oriented transversely to the direction of fall. If it is at an angle to one of these directions, it experiences a torque that turns it into the radial orientation. For an application see stabilization (space travel) .

A spherically symmetrical body does not experience any torque overall. The tidal forces on its surface are directed radially outwards at the two points of the smallest and greatest distance from the center of the central field. At a certain distance from these two points, the tidal forces are parallel to the surface and directed towards these points. On earth, which rotates in the tidal potential of the moon and sun, they periodically generate currents in the water masses of the oceans that cause ebb and flow on the coasts, i.e. the tides .

Maximum values ​​of the tidal acceleration on a satellite

A central body of mass M causes the gravitational force at the closest and most distant point on the surface of a satellite, which has the radius R and its center is at the distance r :

The sign is related to the center point of the central body. Seen from the center of the satellite, however, the tidal acceleration points outwards at both points.

The mean gravitational acceleration that acts on the whole satellite is

The point on the surface of the satellite closest to the central body has the distance , the farthest . The gravitational acceleration at these points is therefore

This is the greatest or smallest gravitational acceleration that acts on a mass element of the satellite. It is therefore larger in the "front" point and smaller than in the "rear" point .

If , as in most cases, the break can be broken through

reproduce and break off the infinite series approximately after the linear term. It follows:

If the distance between a satellite and its central body is very small, the tidal forces become very strong.

At a distance of less than 2.44 times the radius of its central body, a satellite with the same density is torn apart by the tidal forces or cannot even form. This distance is called the “Roche limit” after Édouard Albert Roche , who carried out this estimate for the first time.

These considerations apply to one's own gravity as a relevant antagonist of the tidal force, which ensures cohesion, i.e. in the event of larger bodies (cf. dwarf planet ). In the case of smaller bodies, however, stabilization through cohesive forces predominates .

In the case of artificial satellites , the own gravity for the consideration of cohesion is negligible compared to the tensile and compressive strength and rigidity of the construction materials. Tidal forces can be felt where there is no mechanically fixed connection: when an astronaut is hovering outside or inside the capsule, when tools are floating without a line, when coupling two spacecraft, when there is liquid in a half-full tank.

The comet Shoemaker-Levy 9 passed the planet Jupiter in July 1992 and broke into 21 fragments between 50 and 1000 m in size, which lined up on a chain several million kilometers long. Between July 16 and July 22, 1994, these fragments hit Jupiter.

When stars close together at a distance that is less than the Roche limit, they are greatly changed in a so-called star collision , usually the smaller one is torn apart.

Roche limit not fallen below

The tidal action of Jupiter prevents the asteroid belt from clustering into a planet. For example, if two asteroids pass Jupiter, the one closer to it will attract more than the one further away. The distance between the asteroids is increasing.

On earth, the tides in the seas lead to ebb and flow . However, the tides also have an effect on the Earth's mantle itself, so that the continents also follow the tides with a delay of two hours, but the effect with vertical movements of 20 to 30 centimeters is significantly less than the several meter high tides of the seas.

The tides in large seas can create very strong currents locally due to the tidal range . The existing kinetic energy can be used by means of a tidal power plant.

Tidal friction (not below Roche limit)

The gravitational forces that orbiting bodies exert on one another usually cause a weak coupling of rotation and revolution . This usually converts rotational angular momentum into orbital angular momentum - rarely the other way around, because rotations typically have higher angular velocities than the path movement. The following representation of the mechanism, i.e. the cause of the torque between rotation and revolution, speaks of a rotating and a "distant", to put it simply, the "other", mostly larger body (e.g. the relevant central star), whereby, if both rotate, the effect can also occur with reversed roles. 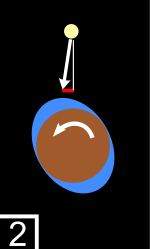 Development of the torque during tidal friction (simplified)

Under the tidal acceleration of the distant body, the rotating body assumes a slightly elongated ( prolate ) shape. Due to internal friction during the deformation, the longitudinal axis is not aligned with the distant body, but twisted in the direction of rotation. The interaction of the distant body with the end of the rotating body facing it is stronger than with the opposite end. The effective point of application for the total force, the so-called center of gravity , is no longer on the line connecting the barycentre of the two bodies, but is shifted slightly in the direction of rotation, which explains the torque.

In the long run, the rotation can transition to a bound rotation . This fate usually hits the smaller body first, like the Earth's moon . As long as the rotation is much faster than the revolution, most of the rotational energy that the rotating body loses is not done as work on the distant body, but is mostly lost as heat . In the case of the retrograde orbiting Triton, orbital energy and gravitational binding energy is also released as heat - the moon drifts inward, to the Roche boundary of its planet Neptune , where it will be torn into a ring system in less than a billion years.

The tides mainly contribute to the torque between the earth and the moon . The deformation of the earth's mantle is predominantly elastic on the short time scale of the earth's rotation and therefore little out of phase with the tidal acceleration. The atmosphere, on the other hand, has too little mass to contribute much. For figures on current rates of change, see Long-term Changes in Earth's Rotation and Secular Acceleration of the Lunar Orbit .

Summary of the impact