In celestial mechanics , the center of mass of a system of several celestial bodies is called the barycenter .

Center of mass of two point masses on a rod

Given a rod of length . The two point masses and are located on this rod at the locations and .

Figure 1: Rod with two point masses and a center of mass (here marked with )

From Figure 1 it can be seen that applies. In Figure 2 the point masses are no longer at the start and end point of the member. Since the scale runs from left to right in the pictures, you have to add the distance between the starting point of the rod and the mass point . This leads to the following formula:

Center of mass of several point masses on a rod

To continue from the previous section, we will now place 3 point masses on a rod.

In order to determine the center of mass, we split this construct into 2 partial rods. To do this, we cut the rod on site and divide the mass halfway on one part of the rod and the other half on the other part of the rod. First we calculate the centers of gravity of the partial rods as follows, as known from the previous section:

With these new values, one now calculates another center of mass, which is ultimately the center of mass of the three point masses:

If you reformulate this equation a bit, you get the following result:

If you compare this result with that from the previous section, a regularity can be seen. If you now distribute n many point masses on a rod, the center of mass can be determined as follows:

It is the total mass, ie the sum of all point masses:

Center of mass with continuous mass distribution along a rod

Here we use the formula from the previous section and form the limit value. This gives an integral representation.

Given a rod of length . The density increases proportionally with the length of the rod. Now calculate the center of mass of the rod!

The proportionality factor here is chosen arbitrarily as .

The center of mass is the weighted mean of the position vectors of all mass points of a body:

It is the density at the site and a volume element . The denominator of these terms is the total mass.

In the case of a homogeneous body, the density can be taken as a factor in front of the integral; the center of mass then coincides with the volume center (the geometric center of gravity). In many cases the calculation can then be simplified; for example, if the volume center lies on an axis of symmetry of the body, for example in the case of a sphere in the center.

In discrete systems , the volume integral can be replaced by a sum of the position vectors of all mass points:

where the sum of all individual masses is:

The term center of mass compared to the center of gravity

Determination of the center of mass 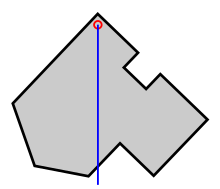 The focus is below the suspension point on the "center of gravity". 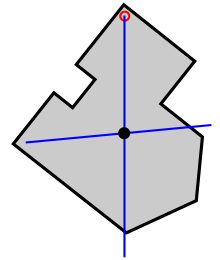 If you repeat this with a different suspension point, you will find (approximately) the center of mass as the intersection of two such straight lines ("centroid"). The fact that such an intersection actually exists and is independent of the choice of suspension points is, however, less trivial than the first impression suggests.

The following method for determining the center of mass of a narrow and elongated object (e.g. ruler or broom) is astonishing: Place the object across the two forefingers stretched forward at the same height, which is easily possible as long as the fingers are still far apart are. Now slowly bring your index fingers closer together until they touch, always keeping them at the same height as possible. If you do this slowly enough, the object glides slowly over your fingers without tilting to one side. The finger, which is closer to the center of mass, is subject to greater pressure, which leads to greater friction. This means that the object primarily slides over the other finger. This regulates the system in such a way that both fingers have roughly the same friction and the center of mass is in their center. Finally, the index fingers touch, the object is still horizontal and the center of gravity is above the two fingers. However, if the object is bent too much, the above-mentioned effect occurs and the center of gravity is below the support point.