An impact crater , also known as an impact crater , is a mostly approximately circular depression on the surface of an earth-like planet or a similar solid celestial body that is created by the impact - the impact  - of another body such as an asteroid or a sufficiently large meteoroid . After the remains of such impactors found, the meteorites , one speaks of a meteorite crater .

In 1960, the American geophysicist Robert S. Dietz proposed the designation Astroblem ("star wound") for impact craters on earth , which has become common in German, partly also in French - for example Astroblème de Rochechouart-Chassenon .

All celestial bodies in the solar system with a solid surface have such craters. The moon is littered with impact craters. Impact craters are not as easy to recognize on Earth, whose surface is constantly being reshaped by erosion , sedimentation and geological activity as on celestial bodies that are not or less affected by them. An extreme example of this is Io , a satellite of Jupiter the size of the Earth's moon , whose surface is shaped by large tidal forces and very active volcanism and therefore has almost no impact craters.

Smaller meteoroids that are on a collision course with the earth burn up or burst in the earth's atmosphere and fall to the ground as small fragments. Larger objects, from a diameter of around 50 m, can penetrate the earth's atmosphere and reach the ground at speeds of 12 to 70 km per second. Hence, such impacts are called high speed impacts. Since the kinetic energy is converted into thermal energy in fractions of a second by strong compression of the material of both bodies , an explosion occurs. The surrounding material is blasted away, and regardless of the angle of impact, a circular depression is created like an explosion crater , at the edges of which the ejected material forms a wall. Around the crater there is ejected material called ejecta . These ejecta can create secondary craters around the primary crater.

Smaller craters generally have a simple bowl-like shape and in this shape are called simple craters . From a certain size, which decreases in inverse proportion to the force of gravity on the respective celestial body and also depends on the target rock, complex craters arise . On the moon this limit diameter is 15 to 20 km, on the earth it is 2 to 4 km.

Some lunar craters also show terrace-like depressions, which are created by the gradual yielding of the rock crust, as in a collapse basin.

Play media file
Simulation of an impact in the laboratory

Upon impact, the contact and compression phase begins , during which a shock wave at supersonic speed propagates from the point of impact in two directions, namely into the impactor and into the target body, through the rock, compressing the material and thereby partially liquefying or evaporating it. At the shock wave front, crystalline minerals can be converted into phases of higher density due to the high pressures. For example, the common mineral quartz can be converted into the high pressure modification coesite or stishovite . Many other shock wave-induced changes occur as the shock wave passes through the impactor as well as the target body, and some of these changes can be used as diagnostic tools to determine whether or not a particular geological structure was created by an impact.

This is followed by the so-called excavation phase , during which the smashed, liquid and gaseous material is thrown out of the crater. A large part of this ejecta (ejecta) is conveyed out of the crater in the form of a conical ejection curtain and forms an annular layer around the crater. An initially very hot cloud of smoke and dust forms over the crater, the condensing components of which can later partially rain back into the crater.

In simple craters , the original cavity is overlaid by breccia , ejecta and molten rock.

The central rise is not caused by elastic springback , but rather by the effort of a material with little or no strength to return to a state of equilibrium of gravity. This is the same process that causes the water to shoot up after an object falls into the water.

In this phase the crater enlarges considerably. Therefore, the transient and not the final crater is used as a measure of the energy and size of the impact event. 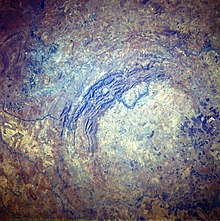 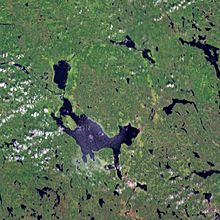 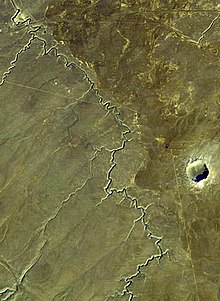 In addition to numerous smaller impact craters, over a hundred with a diameter of more than 5 km have been discovered on Earth . However, many of the impact structures found are not immediately recognizable as craters, as the crater rim has long been eroded ( e.g. Vredefort crater ) or the resulting depression has now been covered by younger sediments ( e.g. Chicxulub crater ). The structure of the Yarrabubba crater in Western Australia, estimated to be up to 70 km in diameter, is largely leveled on the surface. On the basis of uranium-lead dating , it was possible to determine their age at around 2.23 billion years (2229 ± 5 Ma). This makes Yarrabubba the oldest recognized meteorite impact structure on earth.

Further impact structures of the earth

Craters of other heavenly bodies