Artistic interpretation of a major impact event: the collision of an asteroid several kilometers in size on Earth would release more energy than millions of atomic bombs .

As Planetary defense plans are called, the planet Earth and the human race through technical methods and measures extraterrestrial protect threats.

Impact of a celestial body on earth

Number of objects close to the earth, detected by various projects

A potential danger would be an astronomical event , such as the impact of a near-earth object on the earth or a detonation of such an object in the earth's atmosphere . Depending on the nature, mass, density, compressive strength, impact angle or the local geological nature of the impact area, an object with a diameter of 10 meters could cause considerable damage due to its orbital velocity and the additional acceleration it receives from gravity . For astrodynamic reasons, objects can reach collision speeds of more than 72 km / s and thus have considerable kinetic energy and, in the worst case, an enormous potential for destruction. Ballistic shock waves are created when entering the atmosphere . The Jarkowski effect and the gravitational keyhole can have additional relevant influences on the course of the orbit of objects close to the earth, so orbit determinations can be very complex. 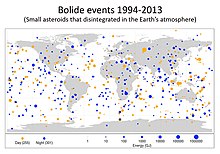 In the past, objects of different sizes collided with the earth, such as B. the KT impact 66 million years ago. Visible traces and fossil remains of impact craters can be found in many places on earth .

In 1908 there was a detonation in the atmosphere (English air burst ) over Tunguska in Siberia . Researchers assume that an object with a diameter of probably 50 m exploded at a height of about 8 to 12 km, releasing energies of 15 to 20 megatons of TNT. Explosions and fragmentation of bolides are detected every year. Until 2009, the US Air Force made infrared observation data available to scientists from the Defense Support Program . Infrasound -Messstellen the CTBTO registered in the period 2000 to 2013 26 events 1-600 kT. From 1994 to 2013 556 racing car events were detected worldwide. The Chelyabinsk meteor entered the earth's atmosphere at a speed of about 19 km / s, fragmented at an altitude of about 45 km and set a TNT equivalent of more than 500 kT in the subsequent airburst at an altitude of 30 to 27 km free. There are also impacts on the Earth's moon every year.

Another threat scenario would be an invasion by possibly existing, aggressive, hostile alien life forms . So far it is not known whether extraterrestrial life exists in any form, research efforts in astrobiology and the search for extraterrestrial intelligence have so far remained unsuccessful. Nevertheless, some researchers see a risk in the threat from aggressive alien civilizations . The astronomer Alexander Saizew coined the term Darth Vader scenario for a military conflict in which humanity is attacked by an extraterrestrial civilization. In the 1970s, the astronomer Martin Ryle feared consequences such as an invasion, colonization and exploitation of terrestrial resources by an intelligent extraterrestrial species on a message previously sent into space by the Arecibo Observatory . Even Stephen Hawking , David Brin , Jared Diamond , Freeman Dyson , Ronald N. Bracewell and Simon Conway Morris warned of possible effects. At the annual AAAS meeting in 2015, researchers called for more active seti to be used and for systematic signals to be sent into space. Opponents of this method again pointed to enormous potential consequences and implications.

Researchers refer to these theoretically possible events with a low probability of occurrence, but possibly far-reaching consequences, also as high-impact / low-probability (HILP) events , black swan events or as wild cards .

Defense strategies and projects against asteroids

The 1984 Strategic Defense Initiative concept of a space-based general-purpose nuclear reactor-pumped laser or hydrogen fluoride laser satellite that fires at a target and creates a moment change in the target object by laser ablation . 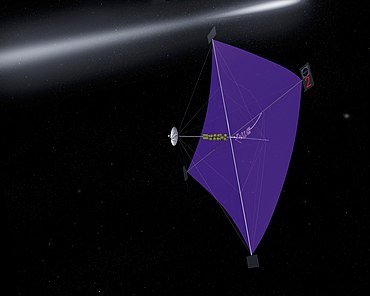 NASA study of a 0.5 km² solar sail for pushing away large celestial bodies

Future defense strategies include land, sea and airborne weapon systems , space weapons , energy weapons and railguns , but also manned and unmanned space missions. In 2007, a possible asteroid defense or a path deflection with nuclear weapons was discussed and examined. In the event of asteroid defense, the US government suspended the dismantling of some nuclear warheads planned for 2015. In 2015, NASA and the National Nuclear Security Administration agreed to cooperate. Nasa and Iowa State University developed a concept for a Hypervelocity Asteroid Intercept Vehicle (HAIV) . The use of UAVs is also being researched. In October 2010, a NASA working group that included Rusty Schweickart , a former astronaut , recommended the establishment of a planetary defense agency, the Planetary Defense Office .

As part of the Space Situational Awareness Program, ESA is also dealing with potential risk factors for the earth, such as space weather , space debris and near-earth objects . The German Air Force and the DLR operate the space situation center , which is u. a. deals with possible hazards from objects in space. In May 2013 the space agency opened a coordination center for near-earth objects in the European Space Research Institute (ESRIN).

Sky surveillance projects such as NEAT , LINEAR , LONEOS , CSS , CINEOS , Spacewatch try to discover near-Earth asteroids and similar objects. For the search project Neowise was WISE -Weltraumteleskop used. The Turin scale , the Palermo scale and impact and collision monitoring systems such as NEODyS and Sentry were designed to better evaluate and classify any risks . NASA and the University of Hawaii are developing the early warning system ATLAS ( Asteroid Terrestrial-Impact Last Alert System ).

For a number of years there have been efforts on an international level to evaluate the risks and dangers emanating from near-earth objects and an impact. The United Nations Office on Outer Space and the United Nations Space Committee established, among others, a. Working groups, such as the UN Action Team 14 , which dealt with the issue. With the establishment of the Space Mission Planning Advisory Group (SMPAG) in 2013, the Action Team ceased its work and was dissolved in 2015.

The International Academy of Astronautics held the first conference ( Protecting Earth from Asteroids ) in Spain in 2009 , further ones in Bucharest in 2011 ( From Threat to Action ), 2013 in Flagstaff , 2015 at ESRIN in Frascati, Italy and 2017 in Tokyo, Japan. In 2019, interdisciplinary organizations simulated different scenarios in Washington, DC

Other non-profit - non-governmental organizations such as the B612 Foundation or the Secure World Foundation are concerned with the possibility of a defense of PHO's ( Potentially Hazardous Objects , Eng. Potentially dangerous objects ). The Space Generation Advisory Council has been holding the Move An Asteroid and Find An Asteroid competitions annually since 2012 .

At a conference on the possibilities and requirements for asteroid mining at the California Institute of Technology in September 2011, Rusty Schweickart saw the greatest challenge for asteroid defense as not required technology and engineering, but rather the current human inability to international cooperation and cooperation . Other researchers, such as B. Claudio Maccone , see the establishment of a global asteroid defense as an international necessity and challenge.

In June 2012, the UN Committee for the Peaceful Uses of Outer Space discussed the creation of an information, analysis and warning network. In February 2013 the Scientific and Technical Subcommittees held a further meeting, whose recommendations will be presented to the General Assembly of the United Nations in 2014 . The United Nations researchers specified the establishment of an international early warning network ( International Asteroid Warning Network - IAWN ) and suggested that the population should be better informed about possible threats and consequences of an impact. A RAND study from 2005 considers a possible impending impact event to be kept secret from the general population until the last possible point in time, in order to be able to carry out any measures and preparations .

ESA, NASA, and other organizations are planning a joint asteroid defense mission, AIDA - Asteroid Impact & Deflection Assessment , in which various defense concepts, such as B. an impactor to be tested. The goal of the project, which is still in the evaluation phase, is the near-Earth asteroid (65803) Didymos .

After the airburst of an object in February 2013 over the Urals, Russian and US American politicians suggested that future global asteroid defense options should be considered. The Russian Federation announced that it would initiate a research project for possible asteroid defense by the end of 2013. The Scientific Committee of the US House of Representatives held a hearing in March 2013 with John Holdren , Charles Bolden and William L. Shelton , head of the Air Force Space Command , from. A committee of the US Senate also dealt with dangers from low-level objects and the possibilities of detection and defense.

NASA started the experimental project 'KaBOOM' ( Ka-Band Objects Observation and Monitoring ) on the area of ​​the Kennedy Space Center . For the time being, three 12-meter radio telescopes will be used. The aim of this proof of concept is to use radar astronomical methods to detect objects at distances between 0.5 and 1 AU .

In April 2013, the US space agency NASA announced the New Asteroid Initiative , which plans to explore a small asteroid in situ . Charles Bolden described a celestial body weighing around 500 tons and seven to ten meters in size as the ideal target object . The mission should also provide information about future distraction and defense measures of objects. In June 2013, the “ Asteroid Grand Challenge ” began, in which NASA invited other space organizations, scientific and private institutions and the interested public to submit suggestions on how potentially dangerous asteroids could be detected, classified and deflected. The first proposals and recommendations were published in January 2014. In March, the crowdsourcing project Asteroid Data Hunter , a programming competition endowed with prize money, started in which NASA and Planetary Resources invited interested software developers to help develop an algorithm that would enable future asteroids to be found more quickly in observation data from earth-based telescopes.

On the occasion of the anniversary of the Tunguska event on June 30, 2015, an International Asteroid Day was held to inform the public. Celebrities and researchers like Carolyn Shoemaker , Martin Rees , Jim Lovell , Alexei Leonow , Chris Austin Hadfield , Brian Cox , Bill Nye , Kip Thorne , Richard Dawkins , Brian May , Jill Cornell Tarter, and others support this initiative.

At the beginning of 2016, NASA set up a coordination office for planetary defense and disaster relief after an asteroid or meteorite impact, the PDCO ( Planetary Defense Coordination Office ). A researcher at the Makejew missile center in Russia suggested the use of optimized ICBMs for asteroid defense; the test target could be (99942) Apophis . The US civil protection agency FEMA has included impact scenarios in its simulation games . In autumn 2016, NASA presented the early warning system Scout . The Asteroid Impact Mission (AIM) found no funding and was rejected at an ESA ministerial meeting in Switzerland in December 2016. In January 2017, the US government published the National Near Earth Object Preparedness Strategy and announced a plan of action . In October 2017, astronomers tested the capabilities of the monitoring systems as part of a multi-site observation campaign . The test object was the Apolloasteroid 2012 TC4 .

The current state of science is that larger asteroids currently pose no danger, as almost all of them are known and their orbits are precisely measured. Medium-sized earth orbit cruisers will very likely come so close many times that they can be discovered and observed over decades and, if necessary, distracted with very gentle methods if the observation programs are generously expanded. For comet that is not true. The warning time remains very short, so that today's technology would be ineffective. At the same time, the hit rate is so low that the development of a suitable defense can be left to future generations. In June 2018, the United States government published the Near-Earth Object Preparedness Strategy and Action Plan.