New objects are typically found by one of the sky search programs such as B. CSS , NEAT , LONEOS , CINEOS , Spacewatch or LINEAR found.

PHAs ( English Potentially Hazardous Asteroids , potentially dangerous asteroids) can be mentioned that about 20% of the NEAs, which in its orbit the Earth's orbit denser than 0.05 AE come and hence through on a time scale of 100 years perturbations may not fall on a collision course. The orbit calculations of the previously known objects have been highly automated with the Sentry monitoring system since 2002 and are listed in the Sentry Risk Table . 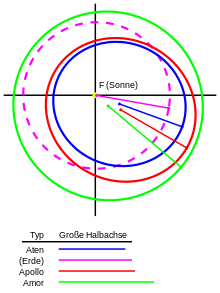 The near-earth asteroids are divided according to the length of their major orbit half-axis and the perihelion and aphelion distances.

The asteroids of the Cupid type are divided into four subgroups depending on the length of their major semi-axis:

Cupid I.
This group includes Cupid asteroids whose semiaxes are shorter than those of Mars' orbit (1.52 AU). If the orbital eccentricity is not too great, they run completely between the orbit of Earth and Mars. Almost 20% of all Cupid asteroids belong to the Cupid I type.
Cupid II
The semi-axes of this subtype are longer, up to 2.12 AU, which corresponds to the inner edge of the main belt , the eccentricities are 0.17 to 0.52. These asteroids therefore cross the orbit of Mars and their aphelion is mostly within the asteroid belt. About a third of the Cupid asteroids belong to this group, including the namesake (1221) Amor.
Cupid III
Their orbits have semi-axes like the asteroids of the asteroid belt, between 2.12 and 3.57 AU. However, their eccentricities (0.4-0.6) are large enough that their perihelion can be close to the earth's orbit and their aphelion can be up to an AU close to Jupiter. About half of all objects of the Cupid type belong to this group, including the largest Cupid asteroid (1036) Ganymede with a diameter of 31.7 km . Some of the members of the Amor III group are in 3: 1 resonance with Jupiter and are therefore counted among the Alinda asteroids, which also includes some Apollo asteroids.
Cupid IV
This small group includes Cupid asteroids with even larger orbital half-axes. Their extended orbits lead them to areas outside of Jupiter's orbit. The best known representative is the asteroid (3552) Don Quixote . 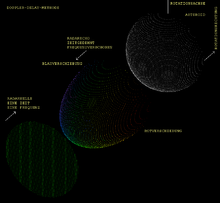 Objects with a large orbit half-axis> 1 AU and perihelion distance <1.017 AU, the aphelion distance of the earth, are referred to as Apollo asteroids according to (1862) Apollo . They can cross the earth's orbit , which means a risk of impact depending on the level of the orbit .

Calculations have shown that the asteroids of the main belt can transition to Apollo orbits as a result of gravitational disturbances of Jupiter . An example of this are the Alinda asteroids, to which some Apollo-type objects such as B. (4179) Toutatis belong. They move in 3: 1 resonance to Jupiter and are thus disturbed in their orbit, whereby the eccentricities of these objects are constantly increased until the resonance is resolved when approaching one of the inner planets. Even if this happens through Venus, an Apollo-type orbit is created, because the definition does not exclude small perihelion distances. 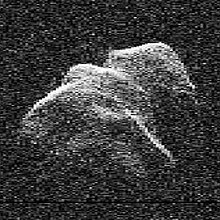 On February 15, 2013, the asteroid (367943) Duende approached Earth to a distance of 27,599 km. Until then classified as an Apollo-type, it changed its orbit through the close encounter with the earth and became the Aten-type.

A relatively small group of asteroids that completely orbit within the earth's orbit ( Inner Earth Objects ) and are therefore difficult to detect. Except for one, all known specimens are larger than 300 m (status: 2011):

Arjuna asteroids are a rare form of near-Earth asteroids and belong to one of the four types described above. Characteristic of asteroids of this class is their Earth-like orbit with a low orbital inclination , low eccentricity and orbital periods of about one Earth year . They are thus in resonance with the earth as earth trojans or on so-called horseshoe orbits . At times they can apparently orbit the earth as a quasi-satellite .

Asteroids near the Sun

As of December 30, 2010, 1746 asteroids were known to intersect Venus' orbit. 507 of them even have their point closest to the Sun within Mercury's orbit. Well-known representatives are:

NASA has been researching the possible accessibility of near-earth asteroids with manned missions in the Near-Earth Object Human Space Flight Accessible Targets Study (NHATS) since 2010 .