The National Geographic Society , based in Washington, DC , is an American society for the advancement of geography .

The society was founded on January 13, 1888 by 33 men in the Washington Cosmos Club . Gardiner Greene Hubbard was elected first President of the Society on January 27, 1888 . After his death in 1897 he was followed by his son-in-law Alexander Graham Bell . The purpose of the association was and is to bring geographic knowledge to the general public.

The logo was designed by Chermayeff & Geismar & Haviv . 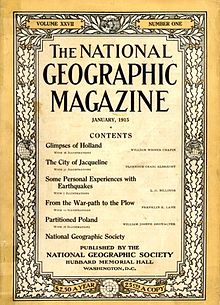 Issue of the magazine from January 1915

In 1905, the editor established Gilbert Hovey Grosvenor the actual photo-journalism , for which the magazine with spectacular color photographs as well as excellent maps inserts and the characteristic yellow border ( yellow border ) is known as a trademark.

Gilbert Hovey Grosvenor shaped the magazine as editor-in-chief for 55 years; his principles of writing only friendly things about countries and people and avoiding unpleasant or inappropriate criticism, however, was controversial. For example, in 1937 the magazine positively mentioned the Berlin transport system and German youth. It was only after Grosvenor's death in the late 1960s that there were critical issues.

In addition to the English-language original edition and the German offshoot, which has been appearing since 1999, there are other local editions of the magazine in Chinese, Danish, Estonian, Finnish, Flemish, French, Greek, Italian, Japanese, Korean, Croatian, Dutch, Norwegian, Polish, Portuguese (individual editions including for Brazil and Portugal), Romanian, Russian, Spanish, Swedish, Serbian, Czech, Turkish and Hungarian.

In 2006 the magazine was awarded the Prince of Asturias Prize for Communication and Humanities.

In May 2007, the National Geographic Magazine was awarded the prize General Excellence Award of the American Society Magazine Editors in the "circulation of over 2 million" and the award for best photography for three issues of the magazine in the year of 2006.

Susan Goldberg is currently the editor-in-chief of the US edition. Chris Johns, her predecessor, was named Editor of the Year at Advertising Age Magazine's October 2008 American Magazine Conference.

The following important information is missing from this section:
Ownership - 21st Century Fox , see sueddeutsche.de
Help Wikipedia by researching and pasting it .

The first issues in Germany cost 5 DM, now the issue price is 6 euros (as of November 2017). A card was often included as a poster in the first few years. These cards are now rarely distributed. However, posters on a specific topic of the respective issue are regularly included in the booklet.

National Geographic Channel has been broadcasting on German-speaking television since 2004. The station's program is broadcast in 153 countries and 27 languages ​​worldwide.