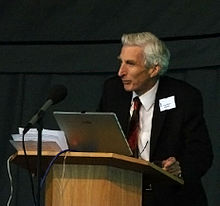 Rees studied at Trinity College , Cambridge and received his PhD in 1967 with Dennis Sciama . After research stays in Great Britain and the USA, he became a professor at Sussex University . From 1973 to 1991 he was Plumian Professor in Cambridge, during which time he headed the Institute for Astronomy there for ten years.

Rees has been a Royal Astronomer ( Astronomer Royal ) since 1995 and was a Masters at Trinity College from 2004 to 2012 and Professor of Cosmology and Astrophysics at Cambridge. From 2005 to 2010 he was President of the Royal Society .

Rees made significant contributions on the origin of cosmic background radiation , on galaxy clusters and on the formation of galaxies. He was one of the earliest proponents of the idea that active galaxy nuclei such as B. Quasars are propelled by matter influx onto black holes and has described important aspects of their physics. In 1966 he proposed an explanation of apparently faster than light objects in astrophysics.

In 2005 he was promoted to Life Peer as Baron Rees of Ludlow , of Ludlow in the County of Shropshire, and has been a member of the House of Lords ever since . 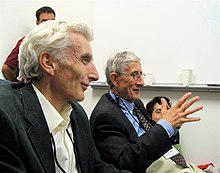