Breccia on the tip of the Sigiswanger Horn 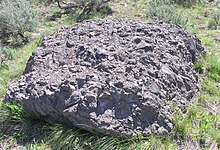 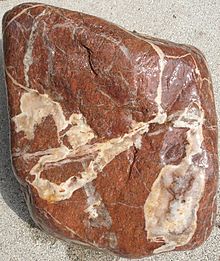 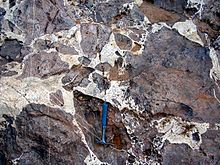 Breccia with debris of different sizes 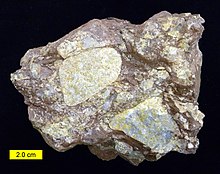 A breccia or breccia (from the Italian breccia : gravel, the term can be found several times in Goethe ) is a rock that consists of angular rock debris that is cemented by a fine-grained base mass. Breccias have a similar structure to the conglomerates , but in contrast to the breccia, they do not include angular, but rounded rocks in a binding agent. Fanglomerates represent an intermediate form with slightly ground edges. The grain size of breccias exceeds two millimeters, rocks with angular grains of smaller grain size are called micro- breccia , grain sizes over 50 centimeters are called megabreccias . Breccias are differentiated according to their formation, for example into sedimentary , volcanic , diagenetic , tectonic breccias and impact breccias . If the fragments consist of only one type of rock, the breccia is monomictic ; if they are different, then it is polymictic .

The formation of sedimentary breccias usually takes place at a short distance from the place where the original material was destroyed. This can be derived from the coarse, angular shape of the caked fragments, as long transport routes (e.g. as sediment entry in watercourses or glaciers ) usually lead to the edges being rounded. The reason for the formation of a breccia is mostly a mass movement , such as a landslide , a landslide or submarine debris in front of a reef .

When rock cavities sink in or collapse as a result of leaching and subrosion , collapse, collapse or leaching breccia are created from the material that has fallen.

Since fanglomerates , which are washed into the plains from mountain slopes especially in desert areas during heavy rain , often still contain angular or only slightly rounded clasts, they are sometimes also referred to as mud breccias .

Other common processes that allow breccias to form are explosive events, such as volcanic eruptions . Eruption breccias form here, or so-called vent breccias if they are still deposited in the volcanic vent. If the coarse components are embedded in tuff , one also speaks of tuff breccia. The surface of viscous lava flows often dissolves into block lava due to the flow movements and autotraction.

Diagenetic breccias, which are formed during the process of rock formation and consolidation, the so-called intraformational breccias, are less common. These are caused by the breaking of already solidified layers of rock by earthquakes or by the fact that an already solidified layer of rock - in many cases limestone - breaks due to high pore water pressure as a result of increasing overburden with new sediment. Examples of this phenomenon can be found in the Middle Triassic of the Northern Limestone Alps .

The occurrence of breccias can in some cases be indirect evidence of an impact event in which a meteorite smashed the rocks and compacted and caked them under high pressure. In Germany, such impact breccias occur, for example, in the form of the colorful breccia in the meteorite craters of the Nördlinger Ries and the Steinheim basin .