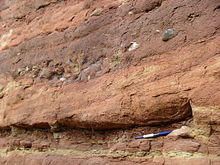 In geology, conglomerate ( Latin conglomerare "to bunch up") denotes a coarse-grained, clastic sedimentary rock that consists of at least 50% rounded components ( gravel or rubble ), which are cemented by a fine-grained matrix. If the components are square, on the other hand, one speaks of a breccia (or breccia ). This fluvial gravels are genesis history closely with the sandstone used and frequently associated with it.

Conglomerates either arise from deposits from rivers with high transport capacity or they form on erosion coasts ( beach conglomerates ). After the diagenetic solidification of these pebbles, conglomerates are formed. The individual grains of the conglomerates can consist of all possible types of rock that are present in the area of ​​origin, but it is mainly resistant rocks (e.g. quartzites ) that have accumulated . The grain size exceeds 2 mm; Individual grains are embedded in a finer, hardened binder (usually quartz or calcite ). In the foothills of the Alps, the binding agent calcium carbonate is widespread in conglomerates and breccias , but dolomite or pebbly binders also occur - quartz (quartz conglomerate) bound with a pebble binder , e.g. B. in the Geotop Blockstrom Kaser Steinstuben near Triftern .

Conglomerates are common worldwide. In principle, you will find them in the same situations as sandstones. However, due to the high transport energy required for the deposition of rubble , they are significantly rarer than sandstones. Conglomerates also do not occur in relatively calm areas of deposit (e.g. in the sea at greater distances from the coast or in the lowlands of the continents). Their occurrence in marine deposits is therefore an indication of proximity to the coast, and on land areas it is evidence of phases of mountain formation.

The detection of conglomerates on Mars caused a sensation through images of Curiosity , since it is assumed that this will be able to prove the fluvial transport of the gravel contained therein.

Conglomerates can be found on the entire edge of the Alps and on the rivers of the Alpine foothills , u. a. in Germany also in the northern Eifel ( Nideggen , Trias ), in the Thuringian Forest ( Eisenach , Perm ) in the Harz , in the Kellerwald and in the vicinity of the Swabian Alb . The Holzer conglomerate is an extremely hard deposit in the Saarland Carboniferous.

The geologically young conglomerates occurring in the northern foothills of the Alps are called Nagelfluh , z. B. in the Nagelfluhkette in the Oberallgäu district , in the St. Galler Voralpen especially in the lower Toggenburg , in the Napfbergland and Rigi . Geologically, they mostly belong to the Molasse , but younger Nagelfluh occurrences are also known ( Teufelskeller near Baden ). Very young Nagelfluh formations also arose from the gravel surfaces of the Ice Ages (e.g. the Günz Glaciation ), especially in the area of ​​the terminal moraines; there this Nagelfluh was the only natural stone next to tufa to be mined and used until the middle of the 20th century; an inventory for the Altötting district (Bavaria) see below.

Nagel fluh , also jokingly referred to as Herrgottsbeton , is reminiscent of poorly sorted or jolted exposed aggregate concrete : moderately well-rounded rocks are enclosed in a baked mass, sometimes also angular in the case of short river transport or large dimensions (up to 50 cm). The relatively hard deposits are often steeply stepped ("Fluh" = Swiss for steep-walled). In the weathering process, the pebbles stand out as “nail heads” from the binding agent (mostly a marly to sandy limestone sediment).

In some geological zones of the Austrian Central Alps , conglomerates of old age are exposed, such as the conglomerate gneiss on the eastern edge of the Tauern window on the Pennine - Austroalpine ceiling boundary . In the western Alps, Permian conglomerates can be found in the Verrucano strata. An important outcrop , described by Horace-Bénédict de Saussure , is near the French town of Vallorcine .

In the central south-west Germany poured water rich Urflüsse Juranagelfluh called sediments , including conglomerates whose pebbles then further derived from the Black Forest and from the northwest reaching Albtafel and their northern foothills. This led to the Urflüsse Graupensandrinne (on the north edge of the molasse basin ), and later in the resulting ancient Danube . Upper Oligocene Elder Juranagelfluh pebbles are only preserved on the northern edge of the Hegau . The younger Juranagelfluhe, which were poured out in the Upper Miocene, have been identified between the canton of Schaffhausen (but especially in the German Hegau) and the eastern Swabian Alb (north and south of today's Upper Danube ) and are recorded on geological maps.