The term Urdonau describes several earlier states in the history of the Danube river system . The term mostly refers to the section north of the Alps.

The Danube system is mapped out by the molasse basin north of the Alpine arc , which stood out in the Tertiary after folding and thrusting processes. The molasse basin was alternately an inlet, freshwater floodplain or marshy lowland, later more and more gravel plain. It opened to the southwest as well as to the east to the "primordial Mediterranean" or to the Paratethys and drained there in continental episodes. The central part, which roughly corresponds to today's southern German Alpine foothills and the Swiss Central Plateau, behaved in a changeable manner , because it drained first to the east, then to the west, again to the east and finally, to this day, in three different directions. The later eastward-directed current system can be regarded as the original Danube , since it came over to today's Danube in at least one section, between Passau and Vienna , with uninterrupted fluvial events.

Molasse basin as a precursor

The Burgstall near Haslach consists of gravel from the original Danube and was created by reversing the relief . Today the Danube runs around 30 kilometers further south.

Gravel and sands of the Urdonau in the Hollabrunn-Mistelbach formation , exposed in a gravel pit in the Glaswein forest . 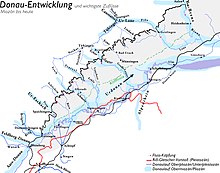 Primeval Danube and development since the Miocene

In the lower Miocene, about 20 million years ago, the Molasse Basin in the Alps was the last time a continuous north ostwestgerichtete Straits ( Helvetmeer , Upper sea molasse ). It was soon divided by the threshold of Amstetten (in the border area of ​​today's Upper Austria with Lower Austria ). In the Upper Miocene , the northward thrust of the African Plate began , in addition to the ongoing Alpidic Orogeny , also to raise the northern foreland to a large extent beyond the rim depression, most notably on both sides of today's southern Upper Rhine Rift . At the same time the Jura folds formed . These uplifts cut off the brackish shallow water basin that remained west of the threshold from the open sea in the west and turned it into an amphibious river and lake landscape. Alpine rubble fans filled the depression steadily (Molasse basin) and pushed the still westward-facing young river system to its northern edge, already near the current course of the Danube. Uplifting and sedimentation processes, which would later lead to the reversal of the direction of flow to the east, were thus initiated a good 15 million years ago.

First original Danube after reversing the direction of flow

It is possible that the impact of the Ries meteorite accelerated the flow reversal soon afterwards . Even if the massive continuous rain over the heated impact area initially stabilized the westward-directed current system, in the form of the broad barley sand flow , and subsequently the more leisurely so-called mica sand flow, the uplift accelerated by the impact quake in the southern Black Forest appears to be an increased filling of the sedimentation basin to have made possible, so that the sluggish waters could finally flow away eastwards, over the shallow sill of Amstetten . In the older Pliocene, about 7 million years ago, for the first time an ancient Danube cut a valley in the direction of the Vienna Basin .

The original Danube ran in parts more northerly than today. The Danube originally ran over the Wellheimer Trockenental into today's Altmühltal .

It also flowed further north between Neustadtl and Spitz than it does today, in the line of the Yspertal , Weitenbachtal and Spitzer Graben , and from Krems through today's Weinviertel ( Hollabrunn - Mistelbacher Schotterkegel), where it flows into a brackish shallow sea.

In the course of the Pliocene, the river system of the Primeval Danube developed over the entire width of the sedimentary plain between the Alps and the German low mountain range threshold (Taunus, Rhön, Thuringian Forest), in a strikingly uniform herringbone pattern, as it is south of the Danube today the case is. 3 to 4 million years ago, the upper Rhone became part of the Danube system and even its headwaters due to the high unfolding Jura north of today's Aare . With the further uplift of Central Europe, the Pannon Sea was cut off from the sea in what is now the Hungarian Plain , and the mouth of the Danube shifted further and further east. At the same time, the upper catchment area, which has meanwhile been strongly elevated, was increasingly cut and reduced in size from the west and north due to erosion processes in neighboring electricity systems. The source river, the upper Rhone, also erupted to the west. The still mighty Aare-Danube remained . So the original Danube system shifted gradually eastward again.

The course of this large Urdonian outlet can now be easily read from the alpine river gravel, which today lies on peaks and plateaus of the Swabian Alb as a result of the continuous uplift , whereas the Danube, mostly only a little further south, now cuts 70 to 200 meters deeper into the subsurface of the uplift area has (until about Ulm). The northern tributaries, which were still large at the time, also began to deepen wide valleys into the Alb plateau.

The most spectacular event (after the Ries impact) in the development of the original Danube was the loss of its upper course to the Rhone Graben in the late Pliocene , which now formed the Aare-Sundgau river through today's High Rhine Valley and the Burgundian Gate . (At the end of the Pliocene, this current turned towards the ever deeper sinking Rhine rift and the North Sea, from now on forming the Basel Rhine knee .)

The next largest tributary of the cut remaining Danube, today's Alpine Rhine , had become the main stream of the original Danube for the time being. Nevertheless, at this stage it is referred to as the Feldberg Danube, as the less water-bearing source branch from the Black Forest already largely corresponded to today's Danube. At the end of the Pliocene, this also applies to the further course of the current. The most notable deviation is marked by the Wellheimer dry valley and the lower Altmühl valley , in which the Danube cut the southern Franconian Alb in wide turns and then formed a loop of the river extending far to the south. This stage of the original Danube is therefore called the Altmühldonau there.

Some tributaries from the north were almost equal to the remaining Danube, the largest of which was fed by the opposing predecessors of the Werra and Fulda . Until about 2.6 million years ago, the main area was drained by several rivers south to the original Danube. It was only with the formation of the Upper Rhine Rift in the oldest Pleistocene that the watershed shifted to the southeast. Accordingly, the most westerly of these Danube tributaries initially reversed its direction of flow to the west towards the Lower Main, later something similar happened on the eastern Mainviereck and the Main Triangle, both witnesses of the old Danube-facing directions of flow. The Neckar and its tributaries now also drained to the Upper Rhine. Today's Upper Main broke through the Haßfurt Keuperstufe in the Danube-Günz-Interglacial and from then on also flowed west.

At the beginning of the middle Pleistocene, perhaps 800,000 years ago, the eruption of the Alpine Rhine into what is now the High Rhine Valley brought about another major loss of water. The Feldbergdonau actually originated in the Black Forest, first on the Kandel , then, after further losses towards the Upper Rhine Plain, on the Feldberg .

In the middle Pleistocene, the Danube also left the Wellheim dry valley. Since then, it has enlarged the Weltenburger Enge gorge .

During several ice ages, the Urdonau was dammed by the foreland glacier of the Alpine Rhine against the southern slope of the Swabian Alb, where it left many valleys as a glacial flank channel . In the Riss Ice Age, for example, the Danube flowed around the Hochstrasse in the north between Ehingen and Ulm . The Schmiech already flowed into the Danube at Schelklingen; Today it takes the path to the mouth at Ehingen against the original direction of flow of the Danube, while the small Schelklinger Ach follows the earlier direction to the north. The lower part of this former course of the Danube, the Blautal , is now drained by the Blau, which rises at the Blautopf in Blaubeuren ; In the early Riss Ice Age, the Blautopf drained directly into the Danube.

The last two events on the way to today's state were on the one hand in the course of the last glacial period , already under human eyes, the loss of the Feldberg Danube to the Wutach and the Upper Rhine, conspicuously marked by the Wutach knee in the course of the Wutach Gorge , and on the other hand the sinking of the Danube towards Lake Constance and the Upper Rhine. The Black Forest upper reaches of the Danube is preparing to become another chapter of the original Danube.

Due to a further uplift of the Bohemian Mass due to the Alpidic orogeny, further river bed shifts to the south between Passau and Tulln are conceivable in the future.