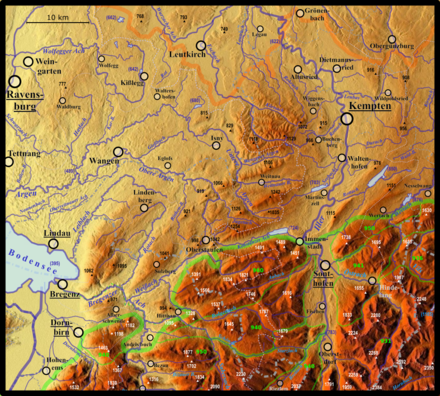 The actual Nagelfluhkette form the natural area 960; north of it you can see three more (up to 1254 m, up to 1242 m and up to 1106 m), which are segmented by upper reaches from the river system of the Argen ; For legend, see picture description page

The Nagelfluh chain is used to denote the three parallel Allgäu Nagelfluh strata ridges in the Alps in the Oberallgäu district, Bavaria, as well as in Vorarlberg, which are made up of rocks from the Nagelfluh , i.e. geologically young conglomerates that are mostly weathered with steep walls:

The Nagelfluhkette Nature Park comprises all three chains, the Nagelfluhkette nature reserve only the German part of the Hochgratkette. Further north there are three more subalpine Nagelfluh chains, which are not advertised under this name (see Nagelfluh heights and valleys between Lake Constance and Wertach ).

The Allgäu chains are continued southwest of the Alpine Rhine Valley, in northeastern Switzerland, each segmented by the Urnäsch valley :

Overall, they are somewhat less pronounced than chains.

To the west of these layer ridges, in the west of the Toggenburg , there is a ridge line from Nagelfluhbergen from the Tweralpspitz (1331 m) over the Schnebelhorn (1292 m) to the Hörnli (1133 m), which runs in a north-northwest direction, i.e. almost perpendicular to the aforementioned chains. However, it is less strongly formed as a "chain", as many, sometimes longer ridge branches of the same rock branch off from the main ridge, some of which reach ridge height ( Höchhand : 1314 m). In the south it continues beyond the Rickenpass to the Speer , the highest Nagelfluhberg in Europe.