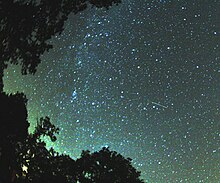 Milky Way and - right of center - a meteor , the tracer one verglühenden meteoroids - apparently from the meteor shower of the Perseids

A meteoroid [ meteoroˈiːt ] (plural meteoroids or meteoroids ; analogy to asteroid and asteroid from meteor and ending -oid ) is a small object of the solar system on an orbit around the sun that is smaller than an asteroid.

A small percentage of the meteoroids cross the earth's orbit . When entering the high atmosphere , they become visible as shooting stars ; the brighter of these meteors are called fireballs .

The size of meteoroids ranging from fractions of a millimeter (micrometeoroids) up to several meters, corresponding to a mass of milligrams to several tons , and have different backgrounds: You can by the gravity of the planet from the asteroid belt , but also by the solar wind from Comet nuclei have been detached, which lose them on their orbit and thereby disintegrate into a meteor shower. The term meteoroid current is more correct, but not common. Furthermore, they can also consist of material from asteroids, dwarf planets or planets due to impact or collision . So meteorites were found on earth , which probably come from Mars and the moon ( see: Martian meteorite , moon meteorite ). The vast majority of the meteorites found on earth come from asteroids.

For the aerospace meteoroids pose a risk, as because of its high speed, the impact energy is so high that even particles can result in less than one centimeter in size to considerable destruction.