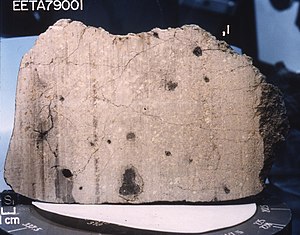 Martian meteorite EETA79001. The first meteorite for which Mars was proven to be the origin. (Photo: NASA )

Martian meteorites are meteorites that originate from the planet Mars . As such, the SNC meteorites , named after the three subgroups S hergottiten, N akhliten and C hassigniten considered. They belong to the achondritic stone meteorites .

Although the first SNC meteorite was found in Chassigny in France as early as 1815 , most meteorite researchers did not recognize its origin from Mars until the early 1980s. However, this origin is not as clearly established as the origin of the lunar meteorites , because there has not yet been a mission to Mars that has brought comparable rocks from there to Earth .

Martian meteorites originate majority not to major asteroid impacts on Mars, but in and of strikes, leaving the crater of three kilometers diameter. Due to the force of the impact, Martian rocks of different ages are thrown into space according to the crater depth . Some of these rocks released in this way reach the earth as meteorites . It was noticeable among these that on average they were much younger than could be explained by extremely rare asteroid impacts. Smaller impacts hurl younger rock layers from shallower depths into space and are more frequent.

Martian meteorites are divided into:

As early as 1979 it was argued that the then known SNC meteorites, unlike most other meteorites, could not come from asteroids. The measured crystallization age of these SNC meteorites was a maximum of 1.3 billion years and was of volcanic origin. Asteroids, on the other hand, cooled down relatively shortly after their formation 4.5 billion years ago and have not shown any volcanism since then. Thereupon it was concluded that apart from the earth only Mars and Venus came into question, since these showed volcanism 1.3 billion years ago; the volcanism on Jupiter's moon Io was not yet known in 1979.

The idea that the said meteorites could have come from Mars only caught on in 1983. In an article in the science magazine Science it was shown at the time that the isotope abundance of argon in shock- melted glass inclusions in the shergottite EETA79001 corresponded to the measurements made by the Viking probe in the atmosphere of Mars . The abundances of the other noble gases as well as carbon dioxide and nitrogen in these glass inclusions were later determined and also agreed with Viking's data.

In further investigations on SNC meteorites, some contradictions were discovered, for example xenon isotope frequencies in the SNC meteorite Chassigny . However, this can be explained by the admixture of noble gases from other sources, for example from the interior of Mars.

The strong alignment of needle-shaped crystals in some SNC meteorites is often mentioned as a further indication of an origin from Mars . The orientation can be explained by the existence of the strong gravitational field of a body with at least the size of the earth's moon during the solidification of the meteorite material from the magma of origin ; however, convection currents of the magma could also have caused the crystals to align.

Another strong indication of origin from Mars was provided by the Opportunity Mission, which discovered and investigated a stone called Bounce Rock , the chemical composition of which is similar to the basaltic shergottites, especially EETA79001.

Electron microscope image of the Martian meteorite Allan Hills 84001. It was disputed whether the elongated shape is the remnant of a bacterium , whether there was at least primitive life on Mars.

In 1996, David S. McKay and his colleagues found structures in the Martian meteorite Allan Hills 84001 (ALH 84001), which had been found in Antarctica in 1984 , which they interpreted as traces of fossil bacteria . Your arguments for traces of fossil life in ALH 84001 were also criticized:

The theses of McKay and his co-authors are still controversial today . In the meantime , possible remnants of earlier life have also been found in two other Martian meteorites, Shergotty and Nakhla .