Achondrite e ( Greek ά (a-), 'without' and χόνδρος (chondros), 'grain') are stone meteorites which, in contrast to the much more common chondrites, contain no or only a few chondras . Achondrites are divided into groups based on element and isotope ratios . A distinction is made between primitive achondrites, which differ from chondrites only in texture and can contain remains of chondrules, and differentiated stone meteorites, which are depleted in iron and elements soluble in iron. They were knocked out of the crust or the mantle of larger mother bodies, which differentiated into an iron core and mantle when they were formed. Three groups, which together make up about two thirds of the achondrites, probably come from the asteroid (4) Vesta , some from the moon and Mars , others could not yet be assigned.

The magmatic origin of the achondrites was first recognized by the Berlin mineralogy professor Gustav Rose .

Achondrite (apart from the dark crust) often gray to white and are made of igneous rock that is primarily from the silicate - minerals olivine , pyroxene and plagioclase composed. Achondrites almost always have a significantly lower nickel iron content than chondrites. But there are also achondrites that contain up to 80% by volume of nickel iron.

A distinction is made between the subclasses described below. 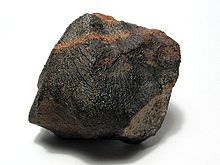 A unique piece of the eucritus of the Millbillillie meteorite .

The stone meteorites of the HED group are the most common group, the origin is assumed to be the asteroid (4) Vesta , because the reflection spectra of this group and that of Vesta are very similar.

All diogenites examined so far have an irradiation age of 22 or 36 million years, i.e. H. at these two times they must have been blown off by a collision from a mother body. The asteroid (237442) 1999 TA 10 is discussed as the mother body , which itself should have come from the mantle of (4) Vesta.

They must have come from a relatively large body, very likely Mars .

The Angrite (named after the place where it was found Angra dos Reis , Brazil ) are differentiated achondrites, which consist of pyroxene, olivine and plagioclase. Unlike the chondrites and primitive achondrites, these minerals exist in forms that indicate magmatic origin. They often contain inclusions that can be interpreted as solidified gas bubbles. In terms of their structure and chemical composition, they are similar to terrestrial basalts. The origin of the Angrite is still unclear. Obviously, they come from an original body of their own that has not yet been identified.

The Aubrite (after the locality Aubres , France) contain the magnesium-rich mineral enstatite . In addition, there are different proportions of reduced nickel-iron, the iron sulfide troilite , the silicate olivine and rare minerals that suggest magmatic formation. When comparing the reflection spectra of asteroids, a match with the asteroid Nysa was found. The Aubrite may have come from this heavenly body.

The Ureilite (after Novo Urei , Russia ) consist mainly of olivine and pyroxene. A special feature of the Ureilite is a carbon-rich matrix with veins, which can contain graphite , diamond , nickel-iron and silicates that fill the gaps . Chemical and isotopic studies of the Ureilite lead to contradicting results. A heterogeneous distribution of the oxygen isotopes and a high proportion of noble gases in Ureilites speak against extensive differentiation of the Ureilite mother body. At the same time, however, ureilites are depleted in siderophilic and lithophilic elements, which indicates the fractional crystallization of a basaltic and a metallic component. So far there is no generally accepted theory about the formation and origin of these meteorites.

Acapulcoite ( Acapulco , Mexico ), Brachinite (Brachina, Australia ), Lodranite (Lodran, India ), Winonaite ( Winona , USA ): These four classes of achondrites are summarized as primitive achondrites . The differentiation of these meteorites is incomplete, so they have largely retained their primitive (chondritic) composition. The structure typical of chondrites was lost, however, and chondras were largely destroyed.

By comparison with the samples brought from the moon, it can be clearly shown that they must have come from the moon . They often contain lunar regolith from the surface of the moon. It is interesting that lunar meteorites were only found on Earth after the moon landing, as only the analysis of lunar rocks allowed a reliable proof of the origin of the moon. The first lunar meteorites were found in Antarctica. The first non-Antarctic lunar meteorite was Calcalong Creek from Australia, described in 1991. Later more were identified among the thousands of meteorite finds from Africa and Oman . In this group, different subclasses can be distinguished according to their origin, the anorthosite regolith highland breccias , the fragmental highland breccias , impact melt breccias , marebasalts and finally mare gabbros .