The enstatite is a common mineral from the group of orthopyroxenes within the mineral class of "silicates and germanates" with the idealized chemical composition of Mg 2 [Si 2 O 6 ]. Enstatite is so chemically seen a magnesium - silicate that is structurally the chain silicates belongs. It forms a mixed series with ferrosilite (Fe 2+ 2 [Si 2 O 6 ]). Within this series, all compositions with more than 1 Mg and less than 0.1 Ca per formula unit are referred to as enstatite, all others generally as hypersthene .

Enstatite is a common rock-forming mineral of the earth's mantle ( peridotite ), the lower earth's crust ( granulite ), basic magmatite ( gabbro , pyroxenite ) as well as granulite-facial metabasite (granulite), metapelite and metamorphic calcium silicate rocks. It is also a component of enstatite chondrites and aubrites , rare classes of stone meteorites . This hard mineral has also been found on the surface of some asteroids , such as (44) Nysa , (64) Angelina and (216) Cleopatra .

The name comes from the Greek ( enstates = opponent, adversary ) and refers to the fact that enstatite is almost infusible.

Other obsolete names were used for enstatite partially or completely converted into other minerals:

The mineral was first described and named in 1855 by Gustav Adolf Kenngott . The type locality is the mountain Zdar near Ruda nad Moravou (German Eisenberg an der March ) in the Czech Republic, since the material for chemical analysis came from there.

In the 8th edition of the mineral classification according to Strunz , which has been obsolete since 1977 , the enstatite belonged to the mineral class of "silicates and germanates" and there to the department of "chain silicates and band silicates (inosilicates)", where it gave its name to the "enstatite series (orthopyroxene). Rhombic-dipyramidal “with the system no. VIII / D.02 and the other member Hypersthen (discredited as mixed crystal in 1988).

In the Lapis mineral directory according to Stefan Weiß, which, out of consideration for private collectors and institutional collections, is still based on this old form of Karl Hugo Strunz's system , the mineral was given the system and mineral number. VIII / F.02-10 . In the "Lapis system" this also corresponds to the section "Chain silicates and band silicates", where enstatite together with akimotoite , bridgmanite , donpeacorite , ferrosilite , nchwaningite and protoenstatite forms the subgroup of "orthopyroxenes" within the pyroxene group (status 2018).

The 9th edition of Strunz's mineral systematics , which has been in effect since 2001 and was updated by the International Mineralogical Association (IMA) until 2009, also classifies enstatite under the category of “chain and band silicates (inosilicates)”. However, this is further subdivided according to the structure of the silicate chains as well as belonging to larger mineral families, so that the mineral according to its composition and structure is classified in the sub-section “Chain and band silicates with 2-periodic single chains Si 2 O 6 ; Pyroxene family "can be found, where it is named after the" Orthopyroxene - Enstatite group "with the system no. 9.DA.05 and the other members akimotoite, donpeacorite and ferrosilite.

The systematics of minerals according to Dana , which is mainly used in the English-speaking world , also assigns enstatite to the class of "silicates and Germanates" and there in the department of "chain silicate minerals". Here he is together with Ferrosilit and Donpeacorit in the group of "Orthopyroxene" with the system no. 65.01.02 within the subsection " Chain Silicates: Simple unbranched chains, W = 1 with chains P = 2 ".

Enstatite under the microscope 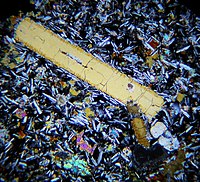 Under the microscope, enstatite appears in volcanic rocks in the form of colorless to pale green (depending on the Fe content) prisms (with sections parallel to the c-axis) or square or octagonal cross-sections (with sections perpendicular to the c-axis). In plutonites and metamorphites, hypidiomorphic to xenomorphic, granular formations predominate. In polarized light it shows white to orange-colored interference colors of the first order.

Magnesium metasilicate MgSiO 3 is polymorphic and can occur with different structure types and symmetries.

The pyroxene structure of MgSiO 3 is no longer stable above 17–18 GPa and the magnesium metasilicate is in the structure of garnet ( majorite ) at temperatures above ~ 1600 ° C and in the ilmenite structure ( akimotoite ) below 1600 to 2000 ° C. At extremely high pressures above ~ 22 GPa, MgSiO 3 changes into the perovskite structure ( bridgmanite ).

Enstatite typically forms in magmatic rocks rich in magnesium and is an essential component of deep rocks such as dunites , gabbros and norites . Together with olivine it forms peridotites and Harzburgites . In volcanic rocks it is found in tholeiites , andesites, and dazites ; it is absent in alkaline rocks . In the case of water scarcity, it can also develop regionally metamorphically in the Katazone, among other things in Charnockites and pyroxen granulites, as well as contact metamorphic in the inner contact area in Pyroxen-Hornfels facies .

In addition to olivine, the accompanying minerals also include diopside , clinopyroxene , phlogopite , pyrope and spinel .

As a frequent mineral formation, enstatite can be found in many places around the world. So far, around 1200 locations for Enstatit have been documented (as of 2020). In addition to its type locality Eisenberg an der March, enstatite was found in several places in Bohemia and Moravia .

In Germany the mineral was found near St. Blasien and Todtmoos in Baden-Württemberg; in Swabia , Franconia and the Upper Palatinate in Bavaria; near Bad Harzburg in Lower Saxony; Niederbachem in North Rhine-Westphalia; in many places in the Eifel in Rhineland-Palatinate as well as near Chemnitz and in the Ore Mountains in Saxony. As a rock-forming mineral , it occurs in numerous places in the tholeiites of the Vogelsberg and the Maintrapps .

In Austria, Enstatit could be found on the Pauliberg in Burgenland, in the Tyrolean community Wildschönau and in several places in Carinthia , Lower Austria , Salzburg and Styria .

In Switzerland, the mineral has so far been found near Utzenstorf (Bern), Tafers (Friborg), Châtillens (Waadt), Saas-Almagell (Valais) and in several places in the cantons of Graubünden and Ticino .

Enstatite was also found in rock samples from the Mid-Atlantic Ridge and East Pacific Ridge as well as outside the Earth on the moon (landing site of the Apollo 15 mission) and in the tail material of Comet Wild 2 .

Locations for the bronzite variety include various meteorites near Massing (Bavaria), Breitscheid (Hesse) , Ibbenbüren and Peckelsheim (North Rhine-Westphalia) and the Ölberg near Hundsangen (Rhineland-Palatinate) and Freiberg (Saxony) in Germany; the Totenkopf (Salzburg) and the Hohenwartberg in the Dunkelsteinerwald (Lower Austria) as well as Kraubath an der Mur (Styria) in Austria and in various meteorites near Utzenstorf (Bern), Langwies (Graubünden) and Châtillens (Vaud) in Switzerland.

Pure enstatite stones can be used as highly refractory stone.

Clear varieties that are worth grinding are also often processed into gemstones .