Dacite (also dacite ) is a felsic , acidic to intermediate volcanic and as such the volcanic equivalent of the granodiorite . Dacitic / granodioritic magmas are sub-alkaline and belong to the calcareous volcanic series (with medium potassium content). They are also metaluminos (A '/ F <0.33), oversaturated with SiO 2 and quartz-normative .

The name "Dazit" is derived from the former Roman province of Dacia . It was used for the first time in 1863 by Franz von Hauer and Guido Stache in their scientific work Geology Transylvania , in order to differentiate this quartz-rich and oligoclase- leading trachyte variety (previously called quartz trachyte ) from common trachytes . They referred to a description of the rock published in the same year with the results of a microscopic examination by Ferdinand Zirkel in the meeting reports of the k. Academy of Sciences in Vienna.

The type locality is in the valley of the Sebes- Körös near the village Poieni (formerly Kissebes ) in the northern Apuseni Mountains in Romania . There are numerous quarries in the Dazit and in the pending trachytes, which opened up the rock extensively at the time of Hauer and Stache .

The deposits between Poieni and the neighboring Bologa (formerly Sebesvár ) gained great economic importance shortly after the rock was scientifically described due to its physical and technical quality. From 1872, its operator supplied huge quantities of paving stones for roads and footpaths from the most important quarry in this region . Important delivery locations in Hungary at that time were Budapest , Békéscsaba , Brassó , Debrecen , Gyula , Kolozsvár , Orosháza , Szarvas , Szeged (focus of deliveries), Szolnok and other cities. The railway also used the rock in the form of blocks for bridges for the Alfölder Railway and as track ballast . In 1881 a siding was built for the newly developed extraction sites on the left slope of the Körös valley.

The conclusion in the route iron diagram

Dazite in the TAS diagram, the composition of the average dazite marked in red

In the route diagram , Dazit occupies QAPF fields 4 and 5 , i.e. H. the proportion of plagioclase in the feldspar content is greater than 65% and its modal quartz proportion varies between 20 and 60%. If the mineral components cannot be identified, it is defined on the basis of chemical analyzes in the TAS field O3 , i. H. its proportion by weight of SiO 2 is normally between 63 and 68% (but can also be higher) and its proportion by weight of Na 2 O and K 2 O is less than 7-8% overall.

Dacite consists of about 66 percent by weight silicon dioxide . It is an effusion equivalent of granodiorite and tonalite . In a dense matrix there are specks of plagioclase and quartz . Hornblende predominantly occurs as a dark part of the mixture . 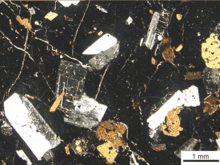 The following table shows the mean values ​​of chemical analyzes of 651 dazites with the conversion into the CIPW standard, as well as two examples of the type locality in Apuseni and Pinatubo (Philippines) for the composition of the trace elements:

Dacite is fine-grained and usually has a pale gray to reddish-brown color, whereby it should be noted that its external appearance is very much dependent on the possible glass content. Its color number is usually between 12 and 14, i.e. H. 12–14% are dark mafic minerals. Those with a color number <5 are leucoacites , with a color number> 25 are meladacites .

Responsible for the final coloring are, in addition to the cracks with their characteristic natural color, finely divided pigment minerals such as hematite , goethite and chlorite .

The recently penetrated lava dome ("whale back") in the volcano of Mount Saint Helens consists of dacite.

Dacite is formed by the rapid cooling of viscous magma , which emerges as lava at temperatures of around 800 to 1000 ° C. It was explosively ejected as Dacite ash in 1980 by Mount St. Helens and in 1991 by the Pinatubo volcano . But Dazite can also form passages and massive intrusions in volcanic centers.

Although Dacitic magma is poorer in silicon dioxide than rhyolite , it can still achieve a higher viscosity - in terms of the danger of eruption activity, it is in no way inferior to rhyolitic magmas. The high explosive potential of Dazit magmas can be explained by the high crystal content in the already quite silica-rich melt. This can lead to enormous Plinian eruptions, by means of which vast amounts of tephra and hot volcanic gases reach the stratosphere.

For Dazite there is currently no uniform development model, and it is quite likely that several mechanisms contribute to the formation of Dazite magmas. The following mechanisms are commonly used for island arc returns:

These are mostly associated with andesites and trachytes .

These are relatively common and occur in various tectonic and magmatic contexts:

This is also said to exist extraterrestrially on Mars .

Dacite is used for floor coverings and paving stones and is sold under various names, such as "Kosice" ( Slovakia ), "Szob" '( Hungary ) or "Yazd Red" ( Iran ). There are colored variants that have been used as gemstones for centuries.